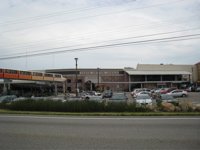 View: Place Reviews
Reviews: 83 | Ratings: 107 | Log in to view all ratings and sort
Reviews by nlmartin:

I doubt that I can really add anything about Jungle Jim's. JJ's is great to experience even without the beer. If there is a wierd food jones you are having if JJ's doesnt have it no one does.

Enough about food we are jonesing for beers. This place has beers laid out by country. They have a great selection of Belgian Ales Chimay, Rochfort, Duval, Kwak, Farmhouse Saison. A good selection of German Lagers Sniederweis, Spaten Optimator. They even have obscure beer countries Vietnam anyone?

They have a really good wall of beer where you can find many good selectioins of american micros. Some of the micros present Founders, Victory, Dog Fish Head, Allagash, Avery, New Belgian. There are more I just cant remember them now.

Many times I go to JJ's and come out with something other than what I went for. Not because they did not have the desired beer. Something else caught my intrest. They also offer on occasion beer tastings and beer educational classes. If you are in Cincinnati stop by JJ's.

A Cincinnati icon. Lots of food, lots of beer. Drinking a beer with you get groceries is pretty cool. They do get some pretty decent stuff on tap. If you need interesting food to go with your beer, this is your place.

A must stop for anyone rolling through Cincinnati looking for local and regional beers. Shelves are easy to navigate and broken up by region. Bell's Two Heartwd canned less than a few weeks ago? Absolutely. An aisle dedicated to local Ohio/Kentucky brews? Makes life real easy. Don't expect much from service since the place is so huge and often crowded with shoppers, but don't let that stop you from swinging by. Make-your-own six packs with a solid selection is a nice option. Points docked for too much warm storage and a cooler that's no bigger than one at a market and is filled with the usual macros. Never had any of the beer on tap but you have to love the option.

I was in Cincinnati celebrating my birthday for the weekend. This was one of the places on my list to visit because I have never been here. I was blown away with their selection. I was also pleasantly surprised that they have about 8 beers on tap for you to try. The store also has a huge selection of food, wine, cheese, cigars, hot sauces, etc. I could spend hours in here checking everything out. I wish it wasn't 3 hours away from where I live. I love shopping while drinking a nice craft beer! I ended up leaving with 4 sampler cases from the local Cincinnati breweries. I can't wait to go back again.

Not only are the Jungle Jim's locations both some seriously impressive grocery stores wherein one can reasonably expect to find anything edible (ostrich? boar bacon? rancid emu eggs? It's there!), but the craft beer section is nothing to sneeze at. Multiple taps for tastings and growler fills, in addition to aisles for country / region, all reasonably well-stocked with tons of breweries' offerings. That includes AleSmith, The Bruery, and tons of others. If you want to see a partial list of what they carry, just look at the "Brands" and "Beers We Sell" sections of the websites for Premium Beverage Supply and Heidelberg Distributing. JJ's orders every single beer each of those distributors carries, plus more.

The imports section is absurd for German and Belgian beers, in a good way. If Paulaner, Ayinger, St. Bernardus, or Weihenstephaner brew it, it's in a bottle there somewhere.

To top it all off, there will occasionally be ludicrous sale prices on packs of beer at the Fairfield location. I've gotten a 12-pack of GLBC Edmund Fitzgerald for $8, and a 6-pack of Left Hand Sawtooth for $4.

The downsides are that the staff aren't generally all that knowledgeable - there are some beer geeks, but mostly grocery store employees who just happen to work in the beer section. Advice is not their forte. They also tend to keep a lot of their inventory on non-refrigerated shelves under fluorescent lights, so check dates on bottles.

Went to Jungle Jim''s yesterday. I was a little disappointed with the amount of options. I guess I was expecting more. Where I wasn't disappointed at all, was the different selections I can't get In Indianapolis. I ended up getting quite a bit. I actually even found Elderberry wine which I had been looking for. It was a two-hour trip from Indy, but worth it if your looking for some exotic foods and a different selection of beers!