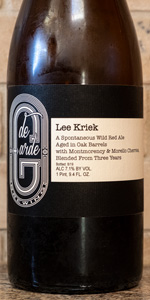 Look: At first it looks more brownish than red but once you let some light near it becomes clearly a red hue of maroon. A bit hazy too. Quite lovely actually. And the head is out of this world for a wild ale. Huge, rocky, and it sticks around forever. Never seen this before in a Kriek.

Nose: Despite the age, the brett is VERY restrained. Barely there (in a good way). Lots of cola and cherry pop soda aromas. You can smell the oak barrel too. If you don't like your wilds to be TOO stinky this one's for you.

Taste: So well balanced. Sour, tangy, fruity, lemony with a hint of upfront bitterness and hint of sweetness. The bitterness lingers forever like a good DIPA. I do not think I can do it justice. I lack the vocabulary.

Mouthfeel: Spot on. Some good wilds can be a bit thin but not this one. It coats your mouth nicely. Carbonation is there to enhance the sourness. Refreshing.

Cap and cork bottle. Opens with ease. The beer looks ruddy auburn-red, like an autumn leaf slowly turning color. Lots of carbonation, lots of foam. The cherry note is evident immediately, along with some wood—oak?—on the back. The cherry comes across on the sip as well, but it’s more of a secondary player. Tannic, and tart, with a long finish.

a really impressive specimen here, quite a bit more grain character and much less directly cherry driven then their regular kriek (nothing regular about it though, one of the best in the game). i did expect this to be a little heavier and darker, being a sour red as a base instead of a more pale lambic type, but i do like the toasted and caramelized notes as well as the breadiness of the richer malt. it seems to carry some fruitiness of its own too, especially with the red wine element of the barrel treatment, a darker black cherry thing, some subtle raisin, red raspberry, and currant tartness, although far less sour than some of their other beers, with both the fruit and malt balancing the acid very effectively. the cherry is but one of many flavors, tons of oak, a little wooden earthy depth and spice, maybe some rye in the mix someplace, a little vanilla richness from the whiskey, some light char, toffee, maple, fig, and the fruit, which is fresh and tart here. the beer is very mature and curiously dry and light by the end for its depth of flavor, grain forwardness, and higher alcohol content. carbonation is lovely from the tap, very soft but lively, and the texture of this is oddly delicate for what it is. if you want the straight up fruit bomb check out the regular kriek, if you want a ton of depth, barrel character, and nuance where the cherry is one voice in an awesome harmony, get your lips on the lee kriek!

most pronounced cheery skin ever

Poured from a bottle (Aug2019) into a Belgian glass

S: slight tart, more tart than funk. Rather light/delicate nose, some cherry but not fruit-forward

T: opens with a nice acidic tart note, then moves into this sour cherry flavor that’s assertive without being overwhelming. Really get the flavor of the montmorency and morello cherries, flesh as well as this earthier pit note. Medium finish, with this lingering sour sensation

O: a nice wild ale that really captures the flavor of the fruit involved. Would have liked a bit more funk to it, but the cherries come across beautifully

Bottled 8/19 poured 4/20
Poured from fridge temp. Color is a dark Amber/Ruby color with a minimal off white head. Nose is dG funk - hay, barnyard, horse, etc..., oak, and cherry and a red ale - something that has more malt backbone then dG regular base. Taste is strong oak, cherry, malty sweet base, dG funk with a mineral astringency. Feel is light and effervescent/good carb . Easy to drink. Overall, nice spin on a classic, decently more complex than Alexander or the likes - however, I really want that gummy cherries and brown sugar.

Sweet, mildly acidic, cherry, funky aromatics on this one! Taste follows with a hint of tart cherry and a funky acidic finish. This is quality stuff, I just wish the cherry had a little more kick to it. This is really good!!!

Vibrant ruby with a creamy pastel pink head, this is one beautiful beer.

Smell is both deeply funky yet sharp, with a solid simulation of cinnamon and marzipan cherry pie spritzed with lemon.

This was batch 1. I've since had batch 3 also, which was far more sour and acidic, painfully so over time, so if I were you I would definitely aim for other batches.

A gorgeous deep ruby body with a thin, pinkish lavender cap. Aromas of funky cherries! Wonderful flavor. Like a Belgian lambic, but with more tartness, in the American style. What a lovely beer. De Garde is world class.

Wow. Really, really great cherry flavor to this beer! I wish I had another one of these!

Nice cherry flavor. Mild tart, some oak as well. The bourbon sneaks in with some leather notes. Rather good.

I never really understand when people say that a beer is jammy. I have had plenty of the cliche beers that get tagged with that word that just doesn't go with beer...but this beer....aw...THIS beer, this one IS jammy. homerun, slam dunk, whatever...for what I look for in a beer, this is firing on ALL cylinders. perfection in a glass to me. psyched to have another bottle of this and a few floating around in the tasting group. cannot wait to have it again.