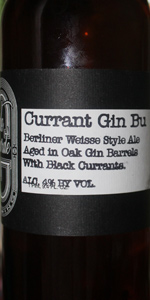 Poured from a 750mL bottle into a DeGarde snifter. Acquired in a trade.

Pours a deep maroon body with a two finger effervescent pink fizzy head that reduces rather quickly to leave no lacing or retention. Color is stunning.

Aromas are are tart and berry-forward with some definite gin notes in there.. I describe it as alpine or "christmas trees", rosemary.

On the tongue is an interesting medley that surprisingly works together.. sour raspberries, currants initially, giving way to spruce and alpine notes, finishing dry and tart. A good balance between the gin barrel and currants. Mouthfeel is light and easy drinking with high carbonation.

An interesting, unique beer that I really enjoyed.

On tap at the Arch Bridge Tap House, as part of their anniversary special tap take over. Have never heard of or seen this beer before, but was advised that it was a "keeper release" from a few releases back (which would certainly explain why I'm not familiar with it).

The beer pours a slightly hazy, rose color, with good retention and decent lacing. The nose is very attractive and complex (no surprise there), as I pick up raspberry and blackberry, light vanilla, wine, gin and maybe some light funk. The flavor profile replicates the nose, though to some extent the complexity is overwhelmed by the sour component. The sour isn't over the top in this beer (I was able to enjoy a small glass without much problem), which I think allows the gin and fruit to shine though better. In fact, the fruit flavor is very bright and really shines on the palate. There also seemed to something of a lemon/lime quality as well in this beer, that blended well with the fruit and gin. Mouthfeel is pretty light, which again, is what you would expect in a 4% abv. beer. Drinkability is exceptional, and this would really make a lovely, spring or summer time drink.

Starts with a nice gin flavor. Then what I assume are some slight currants. It is balanced nicely with some tartness. A good use of a gin barrel. Currants could have been better though.

Thanks to GRG1313 for sharing this one at hopodyssey's tasting.

Pours a murky dark crimson with a foamy reddish-tan head that settles to a partial film on top of the beer. Small streaks of lace form around the glass on the drink down. Smell is sour with currant, gin, earth, and acidic aromas. Taste is much the same with sour grain, currant, botanical, and gin flavors on the finish. There is a mild amount of acidity on the palate with each sip. This beer has a good level of carbonation with a crisp mouthfeel. Overall, this is a good beer with solid currant and gin qualities all around.

gorgeous color. magenta awesomeness. gin is prominent on the nose and it really works. nose is as advertised. gin gives it a nice sharp bite over the croutons of the currants. sick beer.

A- Beautiful dark red-pink body, thick effervescent pink head with great retention, very nice collar and a bit of lacing. Looks great, just like all of the other Bu's.

S- Lots of currant fruit here, wheat, lactobacillus, and a nice dose of juniper. Not so much the gin itself, but the juniper aroma is very strong.

F- Currants, red vinous character, oak, wheat, lactobacillus. Tart, but not as one-dimensional as the other Bu beers. Nice light gin barrel character that is really contributing more of the juniper berry flavour rather than the spirit. Which is really nice, because I'm not a gin fan at all. Nice complexity to this, more than most other Bu's.

M- Medium bodied, crisp and very drinkable. Can't argue with 4% ABV. Very flavourful with a nice depth to it. Not too tart.

O- One of the better Bu's I've had. Lots of depth and tartness that isn't overwhelming or thin in flavour like some of the other Bu's. Nice complexity and very enjoyable beer.

Smell - Umm. It has a savory aroma with the sweet fruitiness. It comes off as... ketchup. The gin overwhelms it, though, and it goes away. Still weird.

Taste - Much better. The gin is very strong. The currant flavor is much more distinct, though, and doesn't make it seem savory. One of the most distinct currant flavors I've had in a beer. Woody finish.

Overall - Hold your breath when you drink it and it's better.

An absolutely beautiful beer. Deep red with a pink head. Looks like a kriek. Piney gin on the aroma. Melange of sweet and tart berry on aroma and flavor. Mild oak and a hint of funk. So unique. This is a standout beer for me. Won the day.

Pour is a deep fuchsia with a pink head that dissipates fairly quickly. Nose is heavy tomato juice, light pepper, and a bit of chlorine. Taste is similar, lots of tomato juice, a bit of currant fruitiness in this one, faint barrel, some heat and acidity in the finish. Light body, soft feel, gentle carbonation, puckering burn.