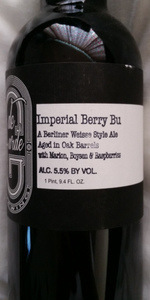 This one GUSHED like crazy and I was at a very nice wedding when I opened it. The bottle leaked all over the table and ruined a nice white tablecloth. After the embarrassment had passed, I did really enjoy the beer. Tons of super tart berries, but there was a slight hint of vinegar that was a little hard to get past.

I think I enjoyed this because of the fruit in it and without the typical enamel peeling acidity de garde is famous for. Each of the fruits is well repsented, but does come off a bit sweet at times. However, I would gladly have another bottle.

Smells very indistinguishably berry forward. I don't really think I've actually had marionberries or boysenberries, but I do smell raspberries. It doesn't smell as lactic and sour as most Bu's I've had.

This is much less sour than most de Garde beers I've had. It's got a pretty significant berry character to it, with a slightly dirty funk character on the end. It's not super complex, but still pretty tasty.

This is lighter bodied, with a prickly and juicy mouthfeel, and a higher level of carbonation.

Another good de Garde offering, but not their best I've had.

This is a good beer.

Very tart, highly carbonated, lightly fruited, and dry on the finish. No barrel apparent on the palate. The fruit on the bottom really comes through, especially as the beer warms.

Overall, this beer is worth the retail price that you would pay at the brewery, but like all de Garde releases, the hype is so through the roof right now that nothing they offer is actually worth the going rate on the trade market.

enjoyed from the de garde ipaish glass. deep murky purple...bit of a gusher. off white head. spotty lace, looks like a fruit smoothie. nose is super berry-ific. fruity. boysenberry zing w blackberry...tropical bouquet. nice nose. wow, deliscious. as much of a wonderful medley in the nose, the taste matches. this is fantastic! so very berry!!! one odd the best degardes I have had to date (and I have had mute than a few).

On tap at the recent dG release event. This was my favorite at the release, as I thought it showed plenty of great fruit, and wasn't overly sour. Would consider having this one again.

Juicy, jammy goodness in a glass with a brilliant expression of blackberries, raspberries and blueberries, fruity, fragrant, clean, tannin-free, allowing the fruit to shine on A little better rounded than either the Black Raz or Purple Raz bu, but not as good IMO. Juicy, jammy, moderately lactic and super refreshing. Highly recommended.