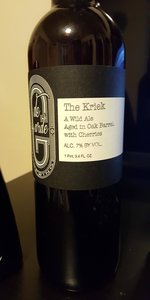 Cherries, wood, light funkiness and light sourness in the nose.

Tart up front, very funky and very woody tasting. There’s clear cherry throughout, but it’s not dominant until the aftertaste.

One of the funkiest beverages I’ve had that wasn’t a straight Brett beer. The cherry seems weak by comparison at first, but grows over time. Super funky without being too tart. Really delicious.

Reviewed by NickSMpls from Washington

4.76/5  rDev +8.4%
look: 4.25 | smell: 5 | taste: 4.75 | feel: 4.5 | overall: 4.75
it looks like these guys do several kriek types, but it would be hard to imagine one being any better than this. this has to be among the best krieks i have ever had, including from the heavy hitters of belgium, it might even be the best. it was my last beer of the holiday season, and it was the perfect way to close down an epic run of beer drinking. the fruited wild ones from de garde have all been insane, but where i thought the framboise i had recently was so fruity that it almost took over the nuances of the fermentation profile, this one the fruit seems to enhance it, the base beer independent of the cherries here is on full display as one of the coolest, most woody and mature and funky beers out there, and the cherries just send it over the edge, near perfection in the glass here. after fussing with the cork awhile, we got this baby opened up and poured, a deep brick red color with a little haze and a high rising airy head that looks like its been drying to break out of the bottle, stained a little pink and only slowly relaxing. the aroma is the best part of this, as compelling a smell from a beer that i have ever known, i cant stop inhaling as deeply as possible through my nose, maybe ten minutes of this before i ever taste it, my mouth waters like crazy, the oak and the mature lambic funk are incredible, very much done like the classic lambic beers of the old world, its piquant but not overtly acidic to me, so much funk, the exact right mix of brett and bacteria, totally wild, but i mean, so refined and dialed in its hard to even put words to, and the cherries are killer, natural and ripe and intense, i think the use of multiple types of cherries was a good call, although i dont know enough about them specifically to say why, this just seems more whole than most, but its the fermentation that has me here! the flavor is next level as well, cherry all the way through, sweet and tart at the same time, like they resolve their own sugar, full spectrum cherry flavor, enhanced by a lemony sourness and this crazy farmy rustic brett funk, and while the beer is dry, the finish isnt that fast, rose champagne, new oak, wet animal, hay and straw, heavy red wine, light vanilla, pepper, and all the good things in the world. this is so expert, the high carbonation is a killer feel for a beer like this, and something i always wish for in the stiller ones, this is so alive, just how i like these to be, its perfect really. i feel like this needs a context to be fully appreciated, like, line up 100 kriek beers and this will be the best one you taste, its insane how good it is. among the best beers i have ever had. oh my god, i have to get more of this!
Jan 06, 2019
Rated: 4.34 by CharlesK from Pennsylvania

Rated by JOSEPHthayer from Colorado