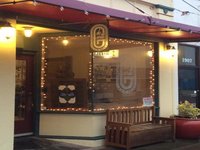 kind of a dream realized to go here, apparently a new spot right in the center of this peculiar little town, i think it used to be more rural, but they have quite the space here and it looks like all the production happens on site. i was so thankful they reopened after the virus (or still during i suppose) just in time for our visit. obviously the beer speaks for itself here, but they have created a space that does justice to it, with a neat patio out the side with just a handful of tables, an open and airy feeling inside area with lots of natural light and a very impressive beer cooler, and the brewing and ageing presumably happening in the adjacent side of the building. its a sleepy little town, makes you wonder how they can support a place that sells beers for 30 bucks a bottle, but i guess they get a lot of out of town traffic through here, and have some better prices on site for sure, i was pleased with what we were charged, many of these are once in a lifetime kind of beers, so i dont mind paying. we had a couple of draft pours and were not blown away by the modest selection on this side of the menu, but maybe running a little lean with the reduced capacity due to the virus, no complaints. the bottle selection is absurd, including some of their most legendary offerings at what seemed like reasonable prices, as well as a very heady list of guest beers, lots of lambics and things like that, big time! we loved everything we had here, but were particularly impressed by bottles of the bluest and the blossom, both of which were oh my god good. these guys have some of the coolest fermentation profiles in the wild game, and their revered status among the nerds and traders seems very well earned to me in my experience with their beers. the service here was awesome, killer bottle presentation, information, and professionalism, prompt but not invasive, friendly and unpretentious, i love that in a place with beer this good. plenty of bottles to go too (and we loaded up!). this is a place worth going out of your way for, cool taproom, but world class beer, i hope to back here next time i head out to the coast. easily the beer highlight of our recent trip! absolutely not to be missed.

Visited the new facility in town for their 6th Anniversary event. Bright and modern, lots of windows and rollup doors. Small bar, tables inside and out, patio. Service excellent. Bring your own food. Excellent sours and a few guest taps.

Went yesterday with my wife and some of my inlaws. Had a couple beers, bought some to go.

I was surprised that almost half their taplist were guest beers, which was probably important for variety (I don't think de Garde makes standard stuff like an IPA). Their own beer of course focused on wild / sour.

Beers we had were really good. Prices are high, which I would expect from an industry darling.

De Garde specializes in sours. Obscure but very cool location on the Oregon Coast. Limited selection because it's not needed. Fruity and colorful sour ales. Be prepared to wait in line in the middle of farmland, behind a warehouse for some of the best sours Oregon has to offer.

A memorable location of which, until I made the trip myself, its absurd remoteness I was blissfully unaware. I had longingly gazed at this picture on BeerAdvocate, imagining de Garde on a quaint, cozy small town street with a light dusting of snow, next to a Christmas themed store where shoppers would casually walk by while students sipped coffee behind the windows of a book store across the street.

Little did I know that de Garde was actually an hour and a half West of Portland, just beyond the mountainous forest, resting at the edge of a pastoral landscape behind a blimp hangar fifteen minutes from the stunning cliffs of the Pacific coast.

If you're hotly anticipating the funk, you won't even have to wait until you cross the threshold--you'll get plenty of barnyard goodness wafting off the grazing cows that seem to outnumber the people in this area, supplying the vaunted Tillamook cheese industry with what must be some extremely happy dairy.

For those on the fence of coming out all this way, it might be wise to check social media beforehand to see if they are releasing something special, or you can be adventurous like us and go in blind, and then be surprised that, "oh hey, there's a Side Project collaboration dropping today, and there's a line before open!" It might be a little busier than normal on such days, but even still, it wasn't anything absurd, with maybe 15-20 people waiting fifteen minutes before open. I've been in longer lines to buy widely distributed beer on a Monday in Ohio.

Once they opened the door, the line moved efficiently, mainly because the draft list is small, and so is the to-go bottle list. Almost everyone present seemed pretty experienced, or at least knew exactly what they wanted, got it, and promptly left or found a spot to sit. Once you do get your initial draft pours and to-go bottles, this is the perfect point in time to peruse the in-house bottle list. Take your time choosing wisely while the initial rush dies down--there are so many in-house bottles to try that your belly simply will not allow you to have them all if you're solo, or even with a sidekick. However, the great thing about the crowd is they're very much beer-share happy, so you will find people to share your bottle with who will likely have something to share with you. If not an in-house bottle, then something they brought from elsewhere.

The interior is small but makes good use of the space with barrels, benches and high tops to sit at, broken up by posters of beer festivals and breweries, as well as shelves of coveted empty bottles. The short hall to the bathroom affords a view of the foudres, the bottling line, and if you lean in, the insane amount of barrels they have in the back. Outdoor seating is available as well, if you can stomach the ever present smell of open pastures, and the occasional cacophony of a few lead-footed farmers pushing their diesel engines to max decibels.

de Garde has an overall pleasant and peacefully fitting setting to sit and drink a farmhouse ale. It's a real treat to be surrounded by actual farms, livestock, hills and mountains...and other extreme beer geeks. It doesn't hurt that the beer itself is second to none.

A small space, split into 3 rooms. Taproom in front, and two rooms for seating adjacent, outdoor seating along the front of the space too. Sparse but bright and inviting interior with a collection of signs on the walls from various wild ale, lambic and guezue breweries around the world. Lovely place, great beer, and friendly informative staff. On the way to the restroom, you pass by their small but breathtaking room full of huge barrels.

6 taps, all wild ales (of course), 4 beers had the same base with different fruits/herbs, one of those was just the base with no additives. Excellent quality beer, all tart and on the dry side.

Also, 750 ml bottles of most of the taps were available to go. And a few beers not on tap were also available in bottles.

Helpful staff, pleasant vibe, and an outstanding on-site bottle list. This brewery is one of my favorite American breweries, and I'm looking forward to seeing how they continue to grow.