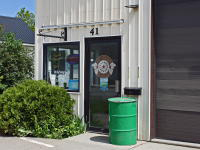 Notes: Brewed With A Mission™ isn't just a call to arms -- 14th Star Brewing Co. is a veteran-owned Vermont craft brewery committed to creating world-class craft beer while giving back to our nation's veterans and our local community. What's your mission?
BEER STATS

kelvarnsen from Canada (ON)

A nice little brewery found in a strip mall in a small town in Vermont. Visited in 2018 and had a flight of four different beers, all were really good. The Tribute IPA and the Chocolate milk stout were excellent. I stopped in just before lunch on a Saturday so the place wasn't very busy but they had a really nice tap room with a stage for live performances. They even had a table with games and stuff so my kids could play Jenga while I drank. If passing by St Albans I would probably stop in here again.

Was up in St. Albans yesterday and figured I had to stop in for some beers. I really loved the fact that they served their hefeweizen in a weizen glass! That made my day! And a great clean vibe. I had a lot of great conversations with various customers that helped make my day. Service started off good but as my time went on I have to admit, I feel like the bartender was a bit bogged down. It took me a half an hour before I got my check. I want to go back but perhaps not during peak hours.

The ugliest taproom I ever saw- and I've seen a lot..... But good beer and friendly staff. Huge parking lot in front of the building (a part of a small shopping mall).

Large open room which is nice for larger events. Has an event hall next door with limited selection compared to the main side. Always busy, so more servers would be nice. The Tap Tenders do their best to keep up. Lately they have been serving beer in plastic cups, which is a bit of a turn off. Very community minded business which is nice to have!

I haven't tried the BBQ from the attached restaurant so that will have to be factored in later. I've heard good things about it though. As for what I have actually experienced- that would include the former tiny brewery location and this current reformed bowling alley since it was opened and expanded. The beers have gotten better with time and it's impressive to see the growth rate of the brewery itself. The bar top is recycled from the very bowling lane that the owner used to reserve with his family, thus carrying on the personal history of the location. As for the service, it's hit or miss. Sometimes I've felt very uncomfortable and unwelcome and other times, it's been a very enjoyable experience. My rating reflects the my perceived average between the two.

Nice variety, wide range of options. Thought the Tribute was by far the best tasting beer. The Maple Stout didn't have nearly as much flavor as I was expecting. Overall great place to try and close home

At the end of a strip mall on the main drag of St-Albans. The bar part is large and semed listless a bit but huge windows overlooking the brewing equipment and a nice tap list make up for the lack of ambiance.