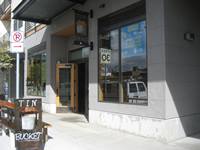 View: Place Reviews
Reviews: 6 | Ratings: 30 | Log in to view all ratings and sort
Reviews by Beervana:

I really wish this place was a bit easier to get to from my office or home, as this place is an absolute gem of a beer bar. Located just north of the Moda Center, Tin Bucket is a smallish, no frills beer bar and bottle shop. As you walk in, there's a smallish bar to your immediate left (where you order your beer as well), a modest size cooler in front of you with a nice selection of bottles to go (or for onsite consumption), and then a scattering of table and chairs. The atmosphere and vibe is low key and laid back, and so this is a pleasant place to hang with a beer or three.

In terms of the draft selection, what Tin Bucket typically has on offer is pretty hard to beat. The day I was there, they had 6 or 7 Fremont BA beers (including rusty nail), as well as a nice selection of ales and lagers from around the regional area. Bells and Founders just recently became available in Portland, so of course this place has had both Two Hearted, Kalamazoo stout and hopslam from Bells on tap, as well as things like Frootwood, Lizard of Koz and Breakfast Stout from Founders. There are 36 well thought out draft selections at any one time here, and frankly, it's hard to imagine ever coming here without finding at least a half dozen beers I'm keenly interested in trying. Pricing is pretty decent (pint of B15 galactic hop shop for $5), and service is good. Expect a friendly and knowledgeable staff any time you visit Tin Bucket.

I just wish it were a bit closer to home, as this place is first rate in every way otherwise.

Good vibe, spartan interior, good music. Outdoor seating and really huge plus was the ability to bring in your own food. Nice selection of beer with one De Garde (Anian) on tap. Service was mediocre with female waitstaff having little personality (proof in point: I stated that it was hard to read the electronic beer menu because of glare and she just stood there without providing any assistance), she did warm up a bit later on, but not much. On tap beer selection was better overall than Belmont Station.

Since moving here a few years ago, this has become a favorite/go-to spot for me. I'm typically here having a pint (or two or three) at least once a week. Relaxed atmosphere with great music playing that varies based on who's working. Typically hip-hop (new and old), and 90s indie-rock (plenty of REM and Guided By Voices). Staff is all very friendly and knowledgeable. Willing to chat as much or as little as you prefer depending on your personality, which is a quality I really like (some folks want to be left alone with their beer, and others want to chat beer/sports/music/etc.).

Tap list is always very good to great with typically 40 options available including cider and mead. Bottle selection is big, but not huge, mostly from the beer fridges with some room temp/shelved exceptions. They'll open available bottles at the bar with no corkage fee, and they have an on premises only vintage list for drinking at the bar (usually some very good options including rare De Garde bottles and traditional gueuzes).

No food available, but you can bring in your own. Plenty of good spots that do carryout within a block or two, including a really tasty sandwich shop, and a great pizza place.

Up there with Belmont Station and Baileys in my opinion. Perhaps lacking some of the charm and character of those two famous/classic spots, but on the same level as far as quality and selection goes.

Amazing selection of beers. Pricey, but you will find stuff here (which you can drink onsite) that you wont find anywhere else in Portland.

the combination growler/bottle shop/tap room is tough to beat, and these folks do it very well. Place is immaculately clean!

I am a big fan of Tin Bucket. They have a bottle selection that isn't quite as extensive as some bottle shops in town but tends to be very well curated and excellently priced. I don't need an infinite selection if I can find a few really good choices every time I go in, and at prices that are often less than my local supermarket.

The tap selection is usually more impressive, especially for such a small space. That brings me to the downside. It's small and the space often fills up. I usually treat this as a place to pick up bottles. If you're into growlers this would be a great growler fillup spot.

This place is the real deal.

I've found the tap list to be of varying quality; even with 40 taps there are times that there's nothing I'd really want a growler of. The interior is pretty nice and the bottle selection, while not exceptional, is solid.

I've opened countless growlers days or even just hours later only to have significant oxidation and/or loss of carbonation. I asked the guy working there how long a growler filled from them would last, and he said I could open it 8 weeks later and it would be totally fresh. At the time I didn't believe him, but I put it to the test.

I had a growler of RPM filled and one flight and 5.5 weeks later, I opened it. There was was no discernible loss of carbonation and it tasted very fresh. Color me impressed!

I would give Tin Bucket 5/5 if only the tap selection was better on a consistent basis.