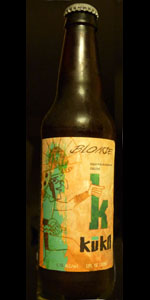 Notes via stream of consciousness: Wow, I thought I was buying an actual Belgian ale, and I was excited that the Belgians were stepping up their game and introducing new beers but alas, this is from New York. It does say that it's "brewed with maca root", so at least that's something. It's poured a hazy yellow-gold, exactly what you'd expect of the style, and the short head of bright white has dropped down to a standard collar and whispy surface covering leaving only short 'mountains' of lace rising from the surface of the beer along the edge of the glass. Looking into the base of the bottle I can see that there's a good deal of yeast sedimented there, not sure if that's for better or worse but I'll hope for 'better'. The aroma is a little spicy, I think I'm picking up coriander, and fruity... hmm, I'm not really sure, perhaps apple and berries, and maybe a hint of lemon or some other citrus rind. The flavor is really quite different, although now I'm sure I'm getting lemon. There's a kind of caramelish breadiness, and something woody or tea-like that I'm guessing is coming from the maca root. It lingers bitterly in the finish, although the beer isn't really that bitter. It's tannic, or astringent. And that sharper fruitines of red berries and apple isn't there, just the lemon and some banana which is OK, I get it, it's from the yeast and just in the aroma but the change from expecting it to not finding it is kind of weird. I hope this isn't sounding bad though, I'd doubt that most imbibers would find it unusual because, really, it is very much just a basic Belgian-style blonde ale. Hmm, I just can't get past that earthy, spicy, almost pungent thing at the end, although I'm now tasting more of the fruitiness that I was missing, some plum and perhaps peach. Pretty malty overall. It's kind of sweetish but then it mostly dries in the end as the malt erodes and that bitterness rises. Medium bodied with a fine-bubbled, slightly moderate carbonation that leaves it a touch creamy. In the end I think that the maca root might have been a bad idea, but I understand it's the Andean brewing company and that's their thing. I can't really recommend this one. It doesn't fit the style well, and the maca root hasn't helped it, and in fact, hinders it.

This beer kinda reminds me of Maudite by Unibroue. I never cared very much for that beer. Something in the vein of overly ripe fruit: dark spots on bananas, squishy spots on nectarines. The malt character makes me think of ingredients that may have been sitting around just a little too long. The notion of brewing with an exotic ingredient as the focal point makes me curios about further offerings from this brewery. All the same, I'm glad I was able to buy just one 12 ounce bottle without having to commit to a six pack of this stuff.

A: The beer is clear amber orange in color and has a light amount of visible carbonation. It poured with a short off white head that quickly died down, leaving a large patch of bubbles in the center of the glass and a collar around the edge.
S: Moderate aromas of Maca root are present in the nose along with some notes of fruity yeast and candi sugar.
T: The taste has flavors of malty root vegetables with bits of sweetness from the candi sugar and hints of fruity yeast.
M: It feels medium-bodied on the palate and has a moderate amount of carbonation.
O: The Maca root definitely lends unusual aromas and flavors to this beer. It was interesting and while not undrinkable, I didn't really find it to be my cup of tea. Apart from the Maca root, the underlying beer tastes a like a hybrid between a Belgian Pale Ale and a Dubbel.

Overall: Interesting and not at all like other Belgian pale I have had. Very bready and sweet. The different ingredient make me want more from this brewery, but I will pass on this brew.

The pour is medium amber with a slightly cloudy look to it, busy carbonation, and a lingering cream colored head that becomes a ring.

There is some aroma here with the toasted biscuit malts, spices, pear or apple, and a slight hop bite.

I think it is nutmeg that I really get as the lead herbal/spice taste along with the caramel malts, mild but meaty fruitiness, and slight hop finish. It does have the basic characteristics of a Belgian blonde and I enjoyed it.

A-pours a clear amber color with an off white head with nice retention and leaves great lacing
S-cocoa, biscuit, almonds with no hop presence
T-more cocoa and biscuit with some slight nuttiness throughout with hops providing balance but not lending to the flavor
M-medium bodied with average carbonation
O-an interesting take on the style, worth trying but probably won't buy again

01/30/14 On tap at Rattle n Hum, NYC. If this is a 'blonde' someone switched the bottles at the salon. It's much nearer a red or a strong ale. Enjoyable if you put aside the expectation of the lightness of being that blonde infers. Haters are gonna' hate but open up & try one.

Yellow to copper pour with a white foam head. Scents were of malt and bit of fragrance\spice aroma. The flavor to me was a bit medicinal (mouthwash) and had a slight bitterness in the finish. This was a light feel and easy drinking ale. But I'm just not that impressed. Still on the fence with Kuka. This was an okay beer.