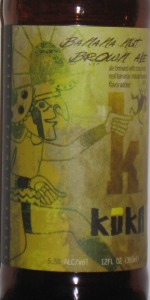 Notes via stream of consciousness: Very dark brown but not to the point of becoming black. It's mostly clear with glowing orange highlights at the base of the glass. The head has already died down to just a thin tan collar. Disappointing in that respect. The aroma is surprisingly chocolatey - I was expecting banana. The flavor, however, offers a good deal of banana. It's not fake, although there is some "natural banana flavor added", and it's not sweet, it's more like a just turning ripe banana. And that mixes well with the lightly cocoa-ish and nutty malt. I'm really quite surprised at how good this is! To be able to get that balance is pretty amazing; and I should also have noted earlier that real bananas are used as well as the flavoring. There's something else to it as well. There's a light touch of some other fruitiness from the yeast (apples, berries), and some clove, but more importantly, something that's almost spicy - I'm guessing that's the Maca root but I'm not sure as I've never tasted it. It's medium bodied and gently crisp across the palate. It's got a moderate bitterness yet it still finishes dry, nutty, toasty, and almost roasty. Nothing is overdone, and the flavors come forward in a progression: cocoa, banana, fruit, clove, spiciness, moe cocoa, nuts, bitterness, more green banana, walnuts, spice. I'm pleasantly surprised, and the head retention and lacing are it's only downfalls, but I assume that's due to the lower carbonation that's there, and which is probably necessary to get the flavors to balance correctly. I was expecting it to be gimmicky but it's actually probably the best banana nut brown ale I've ever had. Also, I thought it would be banana with a brown ale backing but it's really not, it's a solid English-style brown ale with added banana character that gives it an added dimension. It's unique and interesting, and although it's not a beer I'd want to have all of the time I'd certainly enjoy one every now and again. Well done! Kudos to Kuka!

Reviewed by theBubba from New York

3.86/5  rDev +8.4%
look: 3.5 | smell: 4.25 | taste: 3.75 | feel: 3.75 | overall: 3.75
Poured a nice coppery brown in my 3 Philosophers glass with a half inch head that lasted less than a minute though the lacing went on 'til the end. Carbonation was lacking. Kind of flat on the palate. Taste was of course BANANA. I didn't get the nut like flavor other reviewers have mentioned though I did get some nuttyness in the nose. Hazelnut?

Overall this was not a disappointment nor was it a must have again tomorrow. An interesting take on a brown ale. You should try it at least once.

Reviewed by ajilllau from Florida

Reviewed by mahak213 from New York

May 28, 2015
Rated: 4 by ELECTRONICAnonymous from Massachusetts

Rated by frankwoj from Pennsylvania