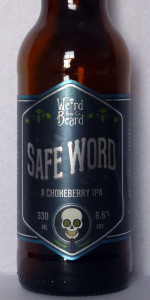 Notes:
View: Beers
Reviews: 3 | Ratings: 8 | Log in to view all ratings and sort
Reviews by Bpayne88:

A 330ml bottle with a BB of Dec 2016, so it's a little out of date. Described as a Chokeberry IPA brewed with chokeberries and hopped with Mosaic. If I understand the label correctly, brewed as a collaboration with Brewdog Shepherds Bush. I have never had chokeberries so I don't know exactly what they will contribute....

A: Poured into a tulip glass. Bottle conditioned. A rich orange-amber hue with hazy sediment and good carbonation. Yields a large head of creamy white foam that slowly reduces to a thick surface layer. Looks good.

S: Aroma of spicy hops and tart fruit, with hints of subdued citrus, peel, vague plumminess, faint raisins, grass/hay, earthy yeast and caramel malt. Possesses a distinct fruity note that is hard to place, but it meshes well with the hops.

O: An interesting effort - the chokeberry pairs well with the hop character but isn't particularly forthright on its own. Looks good, with well judged aroma and flavour for an IPA. Solid mouthfeel. Perhaps inspired by Brewdog's 'My Name Is' brew series. Another inventive effort from Weird Beard.

Flavor is delicious and juicy. I can't say much more than that. I had a good bit of it and the character never changed as it warmed.

Feel is thick and resinous with apt carbonation and a nice woody finish.

I would have it again it's decent.

L: Hazy amber color, one and a half finger white head, good lacing, no visible carbonation.

O: Decent beer but nothing I will look for again.