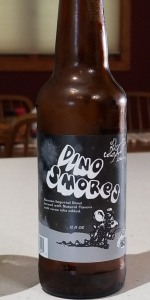 When we launched BorrachaBaker made us some s'mores shaped like dinosaurs for our launch event. Then, we made an imperial stout with graham flour, marshmallow fluff, vanilla, and cocoa nibs with Amager and West Lakeview Liquors. Then, we brought this beer to the Brewpub Shootout and paired the beer named after the food with a food the beer wasn't named after. People were confused and named it best beer (or was it food?) at the Shootout.

Poured from a 12 ounce glass into a teku. This was bottled around March 2014 so has around a half year of age on it.

Appearance: Pours black with a fizzy tan head of a couple fingers which fades at a medium pace, before leaving a little tan fuzz atop the black beer. (4.25)

Taste: Follows the nose pretty well. That graham crackery/malt flavor, vanilla, cocoa, molasses, marshmallow, roasty malts. Not overly sweet at all though, a nice balance of the roasty, bitter malts and the sweet flavors. (4.5)

M- medium bodied, lower in carbonation. Slick and resinous as expected. Burnt malt finish tempered with a bit of vanilla.

O- not as vanilla forward as expected but a wonderfully balanced and nicely done stout that's heavy on the graham crackers.

Pours charcoal black with barely any foam or lacing. Smells like a toasty stout with marshmallows in it. Flavor is marshmallow cocoa puffs. Mouthfeel is silky smooth fudge cotton candy. A decadent, great beer.

I discovered Off Color only in early 2016 and they became my best buddy in record time. Until now, Dino is the only top-selling ale from Off Color that I had not Had.

Fall came, Dinosmores was released and I biked the 606 to their bottlestore/brewshop to make sure that I got it.
With heightened anticipation, I popped it, poured it, smelled it and, then, my buds got popped.
Too many flavors to process at once !
My immediate reaction was: "You fool ! Why did you buy two 4 packs of a beer you never tasted just because others rave about it?"
But by the second sip, I was about a third of the way through the process of assimilating a great beer. (By the third sip, I was convinced my purchase was the correct decision and my self-esteem had returned.)
Then, dessert (chocolate cookies and vanilla ice cream) came into play and I began to understand much better the attraction to Dino. By the time it warmed, I knew the rave.

Given that I have two 4 packs, I will revisit and add to this review.
But for now, I get it.... and I will get it again.

12/9/16 I finished the first 4 pack and am amazed at the versatility of this beer with desserts for colder weather. It's all good... and if it's not, then consider what is wrong with the world around you. If "In vino veritas" is still a useful maxim, then also is "in imperium stout veritas."

1/17/17.... No change in my rating. But because it is so sweet, Dino smores really needs to drunk with dessert... or if you are worried about a sugar high, have Dino as dessert.

12/1/20 Who ever thought that a beer could be a bookend ! I used the two 4 packs from 2016 to drown my sorrows about Don The Con ascending his throne... then, I ignore Dino for the duration of democracy's prison term. Then four years later, Dino gets its annual re-release after Thanksgiving and... I'm all over it. I pick up Dino at Mousetrap (as part of a $94 on-line order from my favorite brewer), bring it home and have Dino for dessert. Then, the Revelation... Dino bookends America's democracy's densest drama in 160 years. And if extending that joy doesn't cause me to stretch out this 4 pack for several years, then nothing will.

Editing the above review, I'm satisfied and will keep count over at UnTappd.

L: poors a dark brown that is not quite opaque, looks solid black in the glass with an imperceptible head.
S: sweetness and chocolate, hint of booze
T: roasted malt with nicely balanced sweetness up front, creamy in the middle, but finishes dry.
F: kind of light, a hint of effervescence despite the lack of head.
O: solid stout but there is something missing besides just the feel.

A- pours a pitch black color with a thin fizzy dark tan head that diastase quickly, leaving nothing behind

S- lots of chocolate and cocoa powder on the nose up front, complimented by a sweetness of vanilla and marshmallow cream. Roasted malt and licorice undertones

T- sweet dark chocolate and cocoa powder up front, with some slightly charred roasted malt. The vanilla adds more of a sweetness as it warms. Roasted finish with a hint of coffee & dark fruit

O- a sweet stout that drinks pretty easily, given the abv. Didn't really get as much of the 'smores' aspect as I was expecting.

Dark brown that results in a moderate dark stout. Just a half inch of head forms and quickly settles to a thin film. Just a little spotty lacing is left down the glass. Not very impressive to look at compared to other big stouts. Aroma is pretty standard with a bit of booze letting the drinker to brace themselves. Notes of roasted malt, turbinado sugar, smoke, and vanilla. Interesting flavor in that the marshmallow fluff comes through strong. Does not really taste like a smore because I am having trouble picking out the chocolate and graham cracker aspect. A bit of campfire character to it as well. Quite a bit of alcohol flavor and burn in the finish. Big body and nice carbonation but the booziness character makes the body feel thinner than it actually is which lowers the score. A good stout with interesting flavor but it is not worth $5 a bottle. Might keep one around and let it age to see how it mellows out in a year or two.

A: Pours a purely opaque black with only small traces of a milk-chocolate brown head. Retention is better than expected, with a small brown ring that never goes away. Lacing is very poor.

T: Comes on with a rich, buttery cocoa quality that gradually reveals some layers of flavor across the mid palate. Marshmallow, vanilla, graham cracker & semi-sweet chocolate all color the palate leading toward the finish. Finish is mercifully slightly bitter, with a dark cocoa powder note that lingers.

O: Despite being pretty doggone sweet, this brew still reads like an RIS to me - subtle heat & depth of flavor really round this one out. Good stuff.

Is there a more tasty imperial stout out there? Probably not, although others might disagree. This would go great with a piece chocolate cake, or dare I saw smores.

On tap in a World of Beer. Thin dark body. Kind of boozy smelling. Interesting. Tastes like marshmallows. Was hoping for more, but it was pretty good.