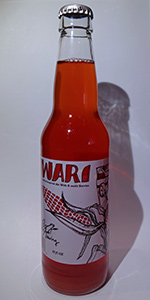 Notes: This Field Museum collab was first released in 2016, inspired by artifacts excavated from a 1,000+ year old brewery in Cerro Baul, Peru. That team, which included Dr. Ryan William of The Field Museum, found a mill, ceramic boiling and fermenting vats, and remnants of molle berries all around the brewery area. Our modern fermented beverage gets its mild pepper taste and aroma from molle berries (pink peppercorns) and a grainy funk and fruit acidity reminiscent of cranberry juice without the sweetness, partly due to some time spent with our house lacto culture.
View: More Beers | Place Reviews
Recent ratings and reviews. | Log in to view more ratings + sorting options.
Rated: 3.98 by TMoney2591 from Illinois

Soft tingly bubbles bring in lightly tart red fruit flavors that most closely resemble pomegranate to my palate. A little tang and dryness bring out black pepper and a touch of smoked malt before coming to a cleanly refreshing finish.

3.51/5  rDev -10.9%
look: 4.25 | smell: 2 | taste: 4 | feel: 3.75 | overall: 4
I was intrigued when I saw this on the shelf during a recent visit to The Beer & Beverage Shoppe. Its color made me initially think that a bottle of pop had somehow made its way onto the singles beer shelf. No, instead, it was an example of chicha, a style that I have wanted to try for a while. I first heard of it through Sam Calagione of DFH, who not only learned how to make it from South American natives, but also enlisted his employees to chew corn for a batch of their own! Yeah, it's made from chewed & spat out corn with the saliva helping to break down the starches for fermentation. The comprehensive Notes explain this one.

I Pop!ped the cap & noticing that it was highly carbonated, I began a slow, gentle C-Line pour into the awaiting glass. True to form, it immediately puffed up, forming just under three fingers of dense, foamy, rocky, pinkish (!) head that looked like fresh-spun cotton candy! 8=O Color was a Pinkish-Amber (SRM = N/A) with NE-quality clarity, although it should be noted that I left a LOT of lees on the punt for a final pour. Nose was highly fecal, reminding me to take a GIRD pill before continuing. 8=p No kidding, it smelled like an open sewer line. Warming, it took on a light tartness, kind of like the cranberry juice that they mentioned, but it was still really stinky. Mouthfeel was thin-to-medium, surprisingly bigger than I expected from such a low-ABV offering. The taste was MUCH better than the nose had led me to expect. It had a mild tartness, very evocative of tart berries, whether cranberries or cherries, but still much tastier than the nose had led me to believe. I also got a corn flavor, but not the unpleasant silage that usually comes as a result of using corn as an adjunct. Instead, it was like Fritos corn chips, a favorite of mine since I was just a wee lad. It had a pleasant corn flavor as opposed to the unpleasantness often found in AALs. Finish was surprisingly tart, dry & very refreshing. I would not want a steady diet of it, but as an oddity, it was actually quite tasty. My only real bugaboo was the smell, which actually lingered in my sinuses. Man, it really stank! My final pour was of the aforementioned lees in the "Waste Not, Want Not" philosophy. This was the distillation or source of the smell. Man, it was like concentrated stink. It also had a softer, more rounded tartness. Interesting.

3.59/5  rDev -8.9%
look: 4 | smell: 3.75 | taste: 3.5 | feel: 3.5 | overall: 3.5
I love these historic recreated beers. This one is particularly interesting. It is from a clear bottle, and is a wild electric reddish-pink color. Little head on the pour that quickly disappears. The aroma is a little tart-smelling, with some fruit and pepper notes. The taste is semi-dry and interesting. It reminds me of a modern slightly sour brew. Interesting.
Sep 06, 2018
Rated: 3.78 by bschmidt_37 from Illinois

4/5  rDev +1.5%
look: 4 | smell: 4 | taste: 4 | feel: 4 | overall: 4
A: Pours a relatively clear medium to dark purplish red in color (not too different than cranberry juice) with light amounts of fine active visible carbonation rising from the bottom of the glass and faint ruby red + purple + raspberry pink + burnt orange colored highlights. The beer has a finger tall fizzy foamy pale pink head that reduces to a large patch of very thin film covering a little more than 75% of the surface of the beer and a thin ring at the edges of the glass. Minimal amounts of lacing are observed.

O: Not knowing what a chicha is supposed to taste/smell like, it is a little hard to judge how well this ancient ale is executed. It is easy to drink with well hidden alcohol and low ABV. Refreshing and enjoyable. Reminds of a bit of a Berliner Weisse but with some subtle differences.

The body is actually more of a ruby-red ringed with orange, not clear but not hazy either. Lots of streams of fine bubbles rise to form a reddish-but-mostly-white very fizzy head, to the point where it's audible. The nose is layered beautifully, to the point of illusion; the initial whiff gives me BEER notes, like barley, corn, and bread crust. Further inspection reveals cherry and strawberry, in such intensity and unilaterality that I'm amazed I missed it entirely at first smell. As I continue sorting this out, honey enters the picture as both malt and fruit come together. The taste hits with some tang from the get go, eliciting cherry and mildly sour fruit, transitions to those bready beer notes, which somehow make straightforward corn into an interesting and worthwhile flavor, and finishes up with some kind of herbal, earthy note that I lack to vocab and experience to name. The feel is as close to energy drink I've ever had from a beer; light with jabbing, prickly carbonation that re-fizzes when it hits your tongue. There is an amount of gritty sugary-ness to it that I could do without, but on the whole it makes for a guiltily refreshing drink.
Righteously crazy beer, dudes. I will never understand what went into this or how it was made, but I do know I enjoyed it. The tartness was quenching but shouldn't scare away sour-haters, and while it did have warmer notes was still a firmly easy-drinking, refreshing brew. Trust kept.

I agree that Wari is a totally different taste sensation and one that must approached with an open mind. So different on even the widening range of what we consider beer, Wari may be barely beer except.... that it is.

There is so much going on that I cannot unpack it and still enjoy... so I'll only do the later.
But I should say that the drying sensation at the end rivals the best Berliner Weiss or gose (two styles Off Color does first rate.)
I think the best way to approach Wari again is some spicier food and test its versatility. Refreshing by itself, Wari is.

4.03/5  rDev +2.3%
look: 4 | smell: 4 | taste: 4 | feel: 4.25 | overall: 4
clear glass bottled beer that isnt macro crap? molle berries? blue corn? the field museum for goodness sake? huge points to these weirdos for originality on this one, thanks to claystation for sharing it with me, never seen craft beer in this kind of package before. the beer is weirdly pinkish, purple, orange, and has a short off white head. off color indeed! blue corn in the mash from what i understand, there is some sweetness to it, and obviously the color, but im not sure i am tasting it. i dont taste much grain here at all, this is a little closer to fermented juice or something than it is beer for me, but i really like it. the berries, which apparently are related to pink peppercorns? have a highly aromatic, almost potpourri vibe about them, but are more smell than taste, no pepper or even really much fruit to the taste, its almost got watermelon in it, a fruit punch complexion, but fruit punch really isnt fruit is it? not overly sweet, real low alcohol, and carbonated like a ginger ale. i really like these old indigenous ales, and this is a neat one, peruvian if i am not mistaken, never had one like it. it sings on the palate, and is quite original. not sure i need more than a shared single bottle of this, but it was a really memorable drinking experience. off color seems to be up for basically anything at this point, and they certainly have my full attention after a brew like this one!
Mar 16, 2017

Smell has a strong aroma of lactobacillus. Tart, sour, slightly vinegary on the nose. There are also notes of berries and a hint of spicy pepper.

Taste is tart with lots of lactobacillus. Strong berry flavor that goes so nicely with the tartness. Strong corn malt backbone is noted - clearly from the peruvian purple corn used in the beer. Definite peppery spice that becomes more discernible as you drink the beer. Dry finish.

Overall, its a hard beer to rate because its so unique. So style doesn't really apply here. However, its a very tasty well done beer in its own right. Drinks like a tart sour. Really good beer.