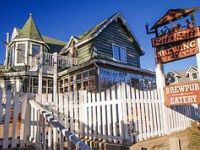 Stopped at Riff Raff for a bite to eat and a cold ale as I was passing thru town on a trip. The quesadilla was delicious and the red ale was solid. I would definitely return.

I was very impressed by the beer here

Loved this place, the music was great and the vibe was casual rustic with a local feel. Everyone seemed to know each other. Best catfish I've ever had in a restaurant and my husband said the same thing about his pulled pork. Happy hour beers were $2.50 and the pulled pork was discounted also. Would go back again. Value for what you get is fantastic.

I was in Chama, New Mexico and had some free time on my hands, so I took the hour drive north to Pagosa Springs to check out this new brewery (opened as of Memorial day, I believe).

What I found was a nice space with indoor and outdoor seating and a delicious food menu. As usual, I was only there for the beer, but all the food I saw coming out, plus the few items I saw on the menu, seemed delectable.

As for the beers, they had all of what you'd expect from a craft brewery: an American IPA, English Pale Ale, a Red, a Kolsch, and a porter. There were also a few special brews on tap, such as a chile beer called El Duende (with both a green and red option, but no christmas, hehe), a double IPA, and a bourbon infused porter (which I mistakenly assumed was barrel aged). I ordered a flight with the kolsch, bourbon infused porter (BIP from here on out), the red, and the double IPA.

The kolsch was good, if perhaps a bit underwhelming, as was the chile beer. Moving on to the DIPA, I found this one to be a tasty, balanced offering. It didn't have the aroma or flavor profile you'd expect from an imperial, but it was well-balanced and easy to drink. Then came the bourbon infused porter, which really threw me off, as I wasn't able to detect any bourbon either on the nose or the palate. I had to reread the menu and realized it wasn't like the barrel-aged deals I'm used to. Speaking to the bardtender---who was friendly and knew her beer---she explained the brewery was far too young to have any BA offerings yet. Fair enough.

I ordered a second flight, this time opting for two of the guest taps (Dry Dock and Breckenridge Brewery) and appreciated that Riff Raff had other brewery's beers on tap. In truth, I wish more breweries did this. To complete the flight I ordered another DIPA and the Plebeian Porter. This time around, I liked or really enjoyed all the beers in my flight.

I left Riff Raff feeling the place has a lot of potential. As the barkeep pointed out, the brewery will eventually be able to offer barrel aged beers and other special brews that I usually gravitate towards. Also, with the great food menu and guest beer taps, there is plenty to keep people happy here. I will have to return in a half a year or so and see how these folks have progressed.

In the meanwhile, stop in and try the double IPA.