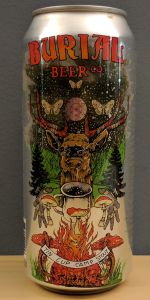 Notes: A team favorite, this easy sipping stout showcases our love for the tin mug at the campfire. A house blend of Counter Culture Coffee beans works with a complex cadre of dark malts, flaked adjuncts and lactose to forge this 5% all day delight. Just a little a reminder of another beloved Burial ale.
View: More Beers | Place Reviews
Recent ratings and reviews. | Log in to view more ratings + sorting options.
3.3 by BNoble4Life from New York on Jan 27, 2021
4 by Karibourgeois from Texas on Feb 04, 2019
4 by Patches826 from Massachusetts on Jan 19, 2019
3.67 by jimpyle48 from Virginia on Dec 19, 2018
3.79 by SadMachine from New Jersey on Dec 14, 2018

Solid two fingers of dark tan foam, good density and retention, even surface, the lacing forms broad streaks with above average stickiness. Black liquid with a hint of orange-brown at the edges, nothing but a few haphazard bubbles to be seen. Chocolaty nose with a smooth American roast coffee foundation, no bitter notes, pecan nuts, sweet condensed milk, more floral than fruity, more persistent than pushy, coffee takes up more space as it warms. Medium-bodied, smooth for the high level of roastiness and perhaps drier than expected for a milk stout. The carbonation is a little lower than preferred. The coffee notes strong and here too without bitterness. More doughy, bready with a vanilla bean to cola bean aspect thrown into the mix, the oats presented with clarity. Maybe a touch of cherry or plum fruit. The more you sip it the more it comes across as a session stout with the volume turned down on purpose. Maybe made for folks who’d like a stout during warmer weather but normally demure. Simplicity is its strength.

16 ounce can, dated 29 sept 18 (I think, kinda blurry). Cool artwork on this one. Pours a medium brown, short lasting tan head. The smallest of rings around the glass.
Nose of smooth coffee without the bitterness, marshmallow, vanilla, crusty brownie.
Much of the same on the taste. Fudge, coffee, marshmallow, overall nuttiness and malted milk. There is a hint of char and earthy bitterness that balances some of the sweetness.
Bigger body for a 5% beer. Smooth and drinkable.

A: Poured into a nonic pint to a black beer topped by a dense two finger tan head which fades slowly to a collar around the edge of the glass with decent lacing
S: Smells of light roastyness and milk chocolate with some slight coffee notes.
T: Taste is light chocolatey notes, smoothcoffee, nice roasted malt backbone and a slight hint of smokey meatyness along with some sweetness from the lactose. On the finish this beer brings more sweetness, some more chocolate, and a little more coffee with some lingering roasted notes. Really nice coffee notes on this beer.
M: The mouthfeel on this beer is on the lighter side of medium. Carbonation is effervescent but not prickly while the beer has a finish that is fairly dry.
O: Overall this is a really solid beer. Really nice flavors and some solid complexity. Somewhat muted but I've sat on this one for awhile and at 5% you can't expect this one to be a punch in the face. It definitely drinks pretty well and is worth a try if you like the style and can find it.

Can poured into a snifter

Taste: The coffee and ashy/smoky tones jut forward, with chocolate and black bread building underneath; a hint of vanilla, in the middle; coffee bitterness lingers, after the swallow

Overall: Somewhat underwhelming, as a bigger mouthfeel and bolder milk stout flavors would improve this beer

Delicious milk stout, not as thick a head as I like... but great flavor. I get a smooth, almost nitro mouth feel. Major chocolate from this.

16oz can grabbed by accident when reaching for an IPA! Did not realize my mistake until I opened it. Received courtesy of Dragginballs76. Hard to read the over-printed stamp on the bottom, but appears to have been canned April 20, 2018.

Pouring out, it looked lighter than it ultimately became in my glass. Once settled, it was a dark brown with lighter brown highlights when held up to light. Initially a big tan, bubbly head, said head dropped fast down to a thin ring. Not much lace unless you violently agitate it, then spots grudgingly are left on the sides of the glass.

Big coffee nose up front. The smell reminds me more of the medium roast ground coffee as I dump it into the coffee maker in the morning before work (I save the really rich, more dark roast stuff for the weekends) than when I'm lifting a brewed cup to my mouth. Also some milk chocolate notes and, interestingly, what reminds me of smoked malts.

In the taste, the coffee seems a bit less raw, and there's more of a nutty, toasted malt flavor present. The (presumably) lacto used gives less a smoky vibe in the taste than in the smell, but also gives a toffeeish taste to things. A lot going on for a fairly light stout.

Relatively light bodied for a stout, but the oats give the mouthfeel a nice creaminess that helps beef it up.

More flavorful than most milk stouts I've had, and the coffee doesn't dominate to the extent I had initially thought it would. I would drink this again. Thanks, Michael!

Poured on draft at Armsby Abbey.

Pours a dark cola brown with a finger of fluffy off-white head. The head settles into a thin ring, leaving plenty of cobweb lacing along the way.

The aroma brings notes of milk chocolate, cocoa powder, and sweet cream with just a hint of coffee.

The flavor brings lots of grains and dark, bready malts as well as some chocolate syrup and strong roasted coffee on the finish.

The feel is medium bodied with moderate carbonation. Very smooth and creamy with a strong lingering coffee bitterness.

Overall, a good milk stout that is rather standard for the style, but is well made and exceptionally drinkable.

Poured the beer into a snifter at 52 degrees. The beer has a two finger head that is creamy and foamy. The head has fair retention and left no lacing on the glass. The head is light tan color. The color of the beer is SRM 38, dark brown nearly black The beer does present with carbonation bubble on the sides of the glass.

The mouthfeel of the beer is carbonated and coating.

The body of the beer is full, full carbonation, and a medium plus finish.

The beer for me failed on several notes. Yes, it is a dark stout but I was wanting the creamy mouthfeel of the milk stout. I felt the beer could have been chewier. Good beer but was the Griddle Stout was flat amazing.

Pours a dark brown color, with a 2 finger tan head. The retention was so,so, and there's no lacing on the glass.
The nose is very rich with coffee. There's not too much else, because the coffee really is strong.
Taste - Up front it's more of lactose, but on the backside its all coffee. The coffee flavor really lingers on the palate.
Feel - moderate body, and the feel of the coffee in my throat really lingers.
One of the better coffee stouts I've had.

The most complete and well-balanced coffee stout I've ever had. The coffee is subtle, and the mouth feel and overall taste is as close to perfect as you can get for this combination of flavors.

one of the more basic burial beers i have had, and while expertly made, highly drinkable, and very tasty, its also one of the least impressive. not because its bad, but because they have set the bar so high with their other stuff that this seemed sort of generic. its really light and thin for a stout, the dark roasted grains arent quite as robust as i like them to be in the style, especially with the lactose in here, they are needed for balance. i get the idea of trying to let the coffee in here do that, but it can be appreciated in the nose a lot more than in the flavor, and that deep roasty bitter low end is missing for me. that said, i like the malt flavors here, some sweetness, some chocolate, and some raisin or tobacco element, not overly complex but well honed. i like the drinkability here and the four season nature of this. i also like the subtle milk sugar, its not so intense as some, and it doesnt make this feel creamy or anything. its well made beer, and its delicious, but i have come to expect just a bit more innovation from these guys. more coffee would set this off...