Until There Is No Longer
Burial Beer Co. 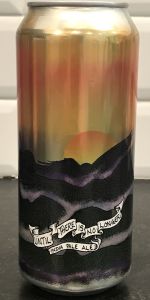 Notes: A pair of wandering orbs fixated upon the bloodsky. And behind them is a lurking addiction to wanting to know what lays beyond it. Double dry-hopped with hand selected Citra pellets and with Citra Cryo powder pellets.

An above average NE IPA here; not mind-blowing but certainly worth having.

A: Pours a milky murky pale straw yellow in color with moderate amounts of fine active visible carbonation rising along the edges of the glass and moderate lemon yellow + bright yellow + pale golden yellow + peach + orange colored highlights. The beer has a three finger tall dense sudsy foamy bright white head that slowly reduces to a handful of small patches of medium thick film surrounded by a large patch of very slightly mottled very thin film covering the remainder of the surface of the beer and a thin ring at the edges of the glass. Moderate amounts of lacing are observed.

S: Moderate to strong aromas of citrus/orange + citrus/grapefruit + citrus/lime + gooseberry hops over the top of light to moderate aromas of biscuit + wheat + oat malts with minimal amounts of sweetness.

T: Upfront there are light to moderate flavors of biscuit + wheat + oat malts with minimal amounts of sweetness. That is followed by moderate to strong flavors of citrus/orange + citrus/grapefruit + citrus/lime + gooseberry hops which impart a very light amount of bitterness which fades away almost instantly leaving lingering Citra hop flavors.

M: Light to medium bodied with moderate amounts of carbonation. Slightly crisp initially with a light amount of soft/fluffiness mid-body and a light to moderate amount of dryness in the finish.

O: Easy to drink with well hidden alcohol and a pleasantly crisp + soft/fluffy mouthfeel. Enjoyable and does a great job of highlighting the Citra hop.

Hazy pale yellow-tan with a spongy foam that quickly dies to no head.

The light body finishes semi-dry with a touch of stinging booze bringing out an accent of minty Smarties.

Until There Is No Longer from Burial Beer Co.
Beer rating: 92 out of 100 with 20 ratings