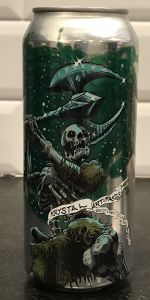 Redemption time. Sometimes the sheer force of memory shatters the bones that stand up our present. So while the wreckage lay in wait of revival, there are luminous visions of brightly vivid clarity. And we turn, ever so briefly towards the beckoning beams of our yesteryear. Dry-Hopped intensely with Citra, Amarillo, Denali and Azacca hops, and then finshed with Amarillo Cryo. Concocted through a shared love for Kolsch yeast, with our friends at Pinthouse Pizza Craft Brewpub.

Rated by warrendietrich2001 from Nevada

Reviewed by jdhops from Tennessee

S: Muted citrus and grapefruit, but not much going on here.

T: Slightly sweet at first, then some grapefruit. A touch of dry bitterness in the finish, which I liked but wanted more of.

O: A decent if unspectacular west coast IPA. Nothing wrong with it, but lacks the piney aroma, hop punch, and strong bitterness of the best examples of the style.

3.93/5  rDev -2.2%
look: 4 | smell: 4 | taste: 3.75 | feel: 4.25 | overall: 4
Hazy dark yellow with a white head. Smell has hops o plenty in the nose, with huge citrus and zest, touches of pineapple and flowers. Taste is the same but nutty with the hops, pervasively so, goes on to define the taste but not exactly what you want in an ipa. Light earth in a bright fashion. Feel is hoppy, bright, and medium bodied, standard stuff elevated. No real weaknesses but doesn't stand out
Jan 01, 2021
Rated: 4.23 by RollDamnTide from Florida

Reviewed by deadonhisfeet from Kentucky

3.84/5  rDev -4.5%
look: 4.25 | smell: 4 | taste: 3.75 | feel: 3.75 | overall: 3.75
West Coast style IPA brewed with Pinthouse Pizza and dry-hopped with Citra, Amarillo, Denali, and Azacca hops. Poured from a can into a New Belgium tulip. The pour is bright orange in color, slightly hazy, and boasts about a finger of rocky white head with good retention. I get orange and pineapple on the nose along with some marmalade and fresh bread.

Medium body with a delicate feel. Up front you are greeted by marmalade and toast with hints of lemon and grapefruit, then at mid-palate the hops take on a slightly undesirable hemp-like, mulchy flavor which really detracts somewhat from an otherwise superb beer. Good, but I'd be lying if I said I wasn't a bit disappointed. Perhaps I am penalizing this beer too much for the off-flavors I noted, but I have become so spoiled lately drinking beers brewed near my home in the Cincinnati area that I have lost my patience for flawed beers.

4.18/5  rDev +4%
look: 4 | smell: 4 | taste: 4.25 | feel: 4.25 | overall: 4.25
A: Pours a very lightly hazy pale to medium golden yellow in color with moderate amounts of fine active visible carbonation rising quickly from the bottom of the glass and moderate bright yellow + golden orange + brassy colored highlights. The beer has a three finger tall dense sudsy foamy off-white head that slowly reduces to a large half finger thick cap in the center of the glass surrounded by a large patch of slightly mottled extremely thin film covering the remainder of the surface of the beer and a medium thick ring at the edges of the glass. Slightly heavier than moderate amounts of lacing are observed.

S: Slightly stronger than moderate aromas of citrus/grapefruit zest, citrus/orange, tropical/mango, floral, dank, and slightly spicy hops over the top of light to moderate aromas of biscuit + bready malts with a light amount of honey-like sweetness.

T: Upfront there is a light to moderate flavor of biscuit + bready malts with a light amount of honey-like sweetness. That is followed by slightly stronger than moderate flavors of citrus/grapefruit zest, citrus/orange, tropical/mango, floral, dank, and slightly spicy hops which impart a very light amount of bitterness which fades away relatively quickly.

M: Just shy of medium bodied with moderate amounts of carbonation. Slightly crisp initially with a soft/fluffy mid-body and a hint of dryness in the finish.

O: Easy to drink with well hidden alcohol and a very pleasantly soft/fluffy mouthfeel. An interesting hybrid of a more traditional American IPA and a NEIPA - you get the softness of the mouthfeel of an NEIPA but more of the less juicy traditional hop profile of an American IPA. I could easily have a few of these.

Smell: It has a bold, crisp citrus aroma. There are grapefruit and floral elements with a low background of spice. There is also a bit of bread in the background as well.

Taste: The flavors are strong with grapefruit, citrus, and floral elements. There is a bit of dankness in the flavor with a very low bready element to it. There is a very low spice element in the background as well.

Feel: It has a medium body that borders towards the full side. The bitterness is strong, but pleasant without sharpness.

Overall, a good combination of hops to create various flavors.