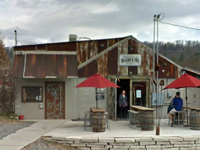 Reviewed by highdesertdrinker from Arizona

4.41/5  rDev +2.8%
vibe: 4.5 | quality: 4.5 | service: 4.5 | selection: 4.25 | food: 4.25
The place itself was pretty cool with outdoor seating on different levels, lots of low lighting, and an old hippie van wedged between tables on the upper levels that you could sit in. The main bar is outside but the bar inside was also good and the bartender in there was the friendliest of the three I encountered. Generally good music wafted from the speakers, and I ate a breakfast sandwich for dinner that was pretty good. I also left a cash tip in the jar at the pickup window to make sure they didn't get shafted in the kitchen. The beers were fresh and tasty and the Mosaic IPA was a standout to me though they unfortunately didn't have that one in cans went I went to choose my to go beer order. I enjoyed myself immensely and stumbled back the long way to my hotel after missing a couple of turns on my gps but it was a good memorable evening on my short trip to Asheville.
Aug 08, 2022

4.44/5  rDev +3.5%
vibe: 4.5 | quality: 4.75 | service: 4 | selection: 4.5
The exterior of this location looks like a rustic old gas station, and a cool one at that, considering the addition of the Sloth and Burt Reynolds mural. We passed the front entrance and went around the side where the crowd was and immediately got in line. Although it was an early Friday afternoon, most of their outdoor seating was already occupied with vacationers, locals working remotely, and everything in between. This has got to be one of the best vibes I've ever seen at a brewery, as far as a mix of adults casually enjoying good beer with good vibes and super chill music.

They have dozens of picnic tables outside, and in the half in-half out space in between here and the front taproom, there are slightly longer than normal metal tables next to fermenters and other brewing equipment seen through a glass wall. While perhaps a little warm here, depending on the weather, you could go further inside to the front where to-go orders are picked up, which we didn't until later. While there are active taps there as well, we opted for the large taplist on the patio like most others seemed to.

The taplist was impressively varied and long, spanning the gamut of styles while of course leaning heavily on their insane array of classic IPAs. That said, what I was most floored by was the fact that their lagers and saisons were actually far better than I'd ever heard from anyone before. Obviously they've made a name for themselves with IPAs and stouts, but these were something else. Still, I couldn't help myself from dabbling with the darker spectrum during my time here, and the two barrel aged stout blends I had were fan-fucking-tastic as well.

I feel stupid for skipping Burial the last couple times I came through Asheville. I won't make that mistake again, and next time I'll come hungry.

Vibe was generally very good in the outdoor garden but was brought down by the heavy metal music was pretty annoying. Don't get me wrong, i enjoy good alternative 90s rock and most other genres of music.

Quality of my APA was very good. Da Boss had a Pils which she enjoyed.

The folks slinging food and beer were nice and cordial to a middle age man who tries to be fun. Unfortunately for the Line Cooks i suspect they miss out on tips based on the structure of ordering and paying for beer and food up front and the beer dudes don't share the tips when you pay for everything up front.

Selection of beer was pretty darn good, full of high quality choices, about 20 on tap.

Food menu is pretty limited but what came out was very tasty. Had the brisket sandwich and fries and Da Boss and FMIL had the trout sandwich.

Overall a good experience that i would do again!

We arrived mid-afternoon and the place was already 3/4 full. We grabbed our beers from the self serve window and grabbed a seat in the lower part of the beer garden. We later relocated to their roof deck and enjoyed the views with our beers. It looks like they are doing a major expansion to their outdoor space and given the crowds, I think it is a great idea.

I didn't go inside due to Covid restrictions.

We liked the beers we had (Lager, APA & IPAs) and could easily have spent the rest of the afternoon here if we didn't already have plans to hit a few more spots.

4.46/5  rDev +4%
vibe: 4.5 | quality: 4.5 | service: 4.25 | selection: 4.5 | food: 4.75
I loved this place! It was the highs of my mini be for my 60th birthday ju before Christmas 2020. After all the @#$&*%! Of 2020, this place made me feel GOOD! Outstanding food coupled with excellent beer in a chill dog friendly environment. Hard to ask for better. Went here early because we heard it filled up fast, and this is true The meatloaf sandwich and radish salad toast was excellent and the three beers I had were great and great with lunch highly recommended!
Jan 06, 2021
Rated: 4.31 by jheimbigner from Washington

Rated by kwakwhore from North Carolina

Rated by HopHeadPaul from South Carolina

4.06/5  rDev -5.4%
vibe: 4.5 | quality: 4.25 | service: 3.75 | selection: 4 | food: 4
vibe - straight NC feel. very rustic, loved it
quality - beers were great, exepcially ipa
service - very helpful and nice but you could tell the baretender found me irritating since it was the end of the night
selelction - tons of options
food - looked good but I got there when I wasn't able to purchase any even though I watned to.