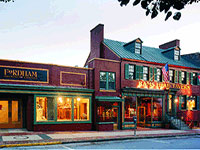 View: Place Reviews
Reviews: 25 | Ratings: 39 | Log in to view all ratings and sort
Reviews by dtivp:

The location was great for me, about halfway between the Westin Hotel and the waterfront.
Atmosphere was very good, small bar area, however, a lot of seating in other areas. Nice Tavern feel, staff was friendly, good service. Fordham beer dominated the selection with a moderate bottle menu. The food selection looked very good, did not eat, however, everyone was very complimentary of the food.
The entertainment schedule was impressive, unfortunately nothing was scheduled during my visit.
If your in Annapolis I would recommend you stop.

It is located right in the heart of Annapolis and you can sit outside and watch people. Their beer selections are below average, but it is a good atmosphere and decent service.

Historic Annapolis pub mixed with live music venue and craft beer brewing. Start by going downstairs, which is often overlooked but packed with history and grab yourself a Fordham. Then make your way out back to sit on the patio and enjoy some quality bar food, lively atmosphere and a nice selection of beers. The patio can get packed with young families on weekend afternoons around brunch but that will shift late afternoon.
Service is laid back and can be a bit slow when on the patio area

The best of the bunch, RMT is one of my favorite places to see some great live music. Seating is intimate and the place has been smoke free well before MD banned indoor smoking. One of the craptacular parts is that the beer menu is different between the concert side and the bar/restaurant side, with the better beer being among the ladder of the two. The basement remains one of the cooler spots to grab some food and enjoy a good beer. It is VERY SMALL however and will get crowded at a certain point, regardless of the night of the week. Live music (down below) also adds to the character of this place. This place has it all as far as dining preference ranging from large party, outdoor-well-designed-intimate-patio style to old Annapolis pub feel.

I enjoyed the Tavern. Its just outside of main street Annapolis but within walking distance of everything the city has to offer. It became a great place to bring friends or to celebrate. Not a bad place for lunch/early dinner either. Overall, the Annapolis area offers a great deal in terms of food and beer.

Chaney from District of Columbia

I still remember when I moved to the DC area way back in 2002 and played often with the Annapolis Symphony, this was the place I would always go with my friends.

Atmosphere: I only sat at the bar, but my wife walked through the place and was awed by its vastness. I'll take her word for it. It's in a really nice location in a rather awesome town.

Quality and Service: The service we had the night we went was pretty good and in terms of beer, the Fordham stuff was fine. Special shout out to the Serious Stout.

Selection: Lots of taps here, mostly brewed by Fordham, but a few from other local MD breweries. Nice.

Food: Didn't do any entrees, but both the onion rings and nachos were great.

Value: Nothing too offensive in this area.

Between the beer & the concert venue, a great place to eat & drink in Annapolis. They changed the menu & have moved away from a "restaurant" menu to more of a "pub" menu - no more crabby mac & cheese, steaks & ribs. They did add, with the burgers, your choice of beef, turkey or veggie burger or chicken filet.

The beer choice is excellent & you can join the beer around the world club. After finishing 100 brews, you get a t-shirt, mug & your name listed in the tavern.

Concert venue is small & intimate but brings in the great acts such as Kenny Wayne Shepard, Willie Nile & Galic Storm

I stopped in for brunch one Sunday afternoon. The place was pretty slow when we first got there, but by the time we left it was starting to fill up.

The building is nice from the outside. Walking in the doors, the bar is right there off to the right. There are tables all around with seating in the back. Old time brewing equipment is on display, to the left as you walk in. We actually sat at a table right next to the copper kettle.

Our waitress was very prompt with our drinks and our food came out rather quickly. She was knowledgeable about the beer menu and even pointed out the upcoming beer release.

The brunch menu was very nice with offerings from sandwiches, waffles, and eggs Benedict. I had the egg and chorizo tacos...three huge tacos with a side of home fries...talk about fulfilling. My girlfriend ordered the Belgian waffle with fresh fruit...the waffle was big and fluffy, but there was only two strawberries on talk.

As far as the beer selection, it was decent. There were no complaints on my part. Most of the selection was offerings from Fordham Brewing...the Tavern and Copperhead were solid. They also had a few Old Dominion beers. How can you go wrong Old Dominion Oak Barrel Stout?! There were other micros available as well.

Rams Head Tavern was an enjoyable place to have Sunday brunch. I would like to visit some of the other locations, but this location was perfect...downtown Annapolis.

Met a friend here who I hadn't seen in about 18 years or something. It was a great meeting spot, in terms of vibe and atmosphere, and the waiter was happy to let us sit and reacquaint for about 15 minutes before we even opened our menus.

I ordered the Tavern Ale, which is a good, solid, bright American Pale Ale. Enjoyed it. My only real complaint with the waiter is that he didn't even seem to know their own beer menu. He took the menus from us as soon as we were done ordering, so when I went to order my second beer, I told him I wanted the Rams Head beer that was described as an "altbier" on the menu. He didn't seem to know what an "altbier" was and seemed to not know they had brewed one. So then he came back to the table with a bottle of Ayinger which was an alt. Cool, it was very good, but not what I ordered. I didn't complain and enjoyed it. And here's where I realized they have a handful of other beers to offer, but you do NOT see that anywhere on the menu. It's only if you were sitting at the bar that you'd know this. So...I guess I was a little disappointed that the waiter didn't really 1) know the brewpub's own offerings and 2) didn't make us aware of the variety of beers that were on offer.

The food was good, although far from spectacular. Tried three different items, and they skirted dangerously close to the bland side, although there was nothing egregiously wrong either. Have definitely had way better pub/brewpub food elsewhere. That bar is set pretty high by now, I think.

Atmosphere is fine, it's quite big and I guess I didn't totally note all the details since I was focused on my old friend and our conversation. I will note that the neighborhood it's in is excellent, has that old-world/colonial New England vibe, complete with old red brick buildings and a beautiful church at the end of the street...you could just picture Benjamin Franklin walking around.

Would go again if I was in the area, but wouldn't go out of my way to make it there if I wasn't.

The beer selection is sizable, probably the biggest that I'm aware of in Annapolis, with lots of quality choices on draught. The house brew is also pretty solid, including great seasonals. Great atmosphere, fun but not deafeningly loud and never too crowded to find a seat somewhere. There is a concert venue attached (small little-known or has-been acts), but usually no live music in the bar itself. Plenty of TVs for sporting events though, and nice spaces including a heated garden area and a cool basement bar.

The clientele ranges in age from twentysomethings to older folks. Which isn't to say the food is bad. I like the appetizers and the burgers, especially the Fordham Cup burger (topped with an onion ring holding in the house crab dip. It's good pub food, but it's still pub food. Usually my friends and I are there for the drinks, not the meals. The wait staff is pretty nice and helpful, though sometimes difficult to track down for another round or to pick up the check.

This location is my favorite of all of the Ram's Head locations. Its in a fun spot in downtown Annapolis. You get a unique variety of people from the local college kids to an older crowd as well. They have Fordham beers on tap which are all excellent. I like the Copperhead myself. The place has a unique layout that offers louder and more quiet areas depending on what mood you are in. They often have live music as well. The food is also excellent. I notice that had free food out during happy hour as well. A fun spot in a cool town to spend a day.