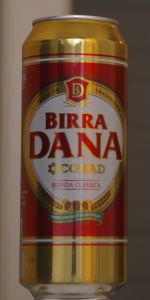 Notes:
View: Beers
Reviews: 2 | Ratings: 5 | Log in to view all ratings and sort

Today is T, 12 Mai 2020 & I am in deep isolation during the COVID-19 crisis, giving me ample time to clear out my backlog. This one will CANtinue a few days of imports for The CANQuest (tm). This one came to me from local, in-person trader @tone77 following a trip to Italy!

I have to admit to a modicum of curiosity about this one & I will address this as part of my review. I beCAN by Crack!ing open the vent to initiate a slow, gentle C-Line Glug into the awaiting glass. I was rather pleasantly surprised when it foamed beautifully to form two-plus fingers of foamy, soapy, rocky, bone-white head, but its retention was rather limited. Color was Yellow-Gold (although I debated Straw-Yellow), but it's clarity was far beyond the usual NE-quality & into button/filament-brightness. SRM was acCANdingly 4 - 5 & The Gelt Gang of Midas, Mammon & Croesus seemed to agree as they joined me in the kitchen for a taste. And now, the first moment of truth - @tone77 mentioned "green apples" in his review, suggestive of a "young beer" that had been taken away from the yeast too early, causing the formation of acetaldehyde. I was not getting it on the nose. Instead, it was rather innocuous with a light breadiness from the malt & no indication of the presence of any hops. Hmm. Mouthfeel was medium, not bad for a Lager. The taste simply had a light breadiness with a hint of grassy hops, but it was almost as if it were embarrassed of any bitterness, cowering behind anything available.

As to any taste of green apples, I'm going to disagree with @tone77 on this point. I will readily cop to having a blind spot when it comes to diacetyl, but acetaldehyde usually jumps out at me & such was not the case here. I am NOT saying that he did not taste green apples, but instead providing a CANterpoint that I did not & I don't want his verbiage to raise alarms. He may well have tasted it, but that would mark a serious flaw & I do not think that this beer had it.

Finish was semi-dry, more malty than CANything else, certainly more than whatever modicum of hops were involved. It was light, innocuous, easy-drinking, rather ephemeral overall. How CAN you dun something that was barely there in the first place? I CANnot, YMMV.

I had this beer while in Rome. Poured from a 16.9 oz. can. Has a dark golden color with a 1/2 inch head. Smell is of cereal grains. Taste is of grains, a bit of green apples, not so pleasant. Feels medium bodied in the mouth and overall is a mediocre beer.