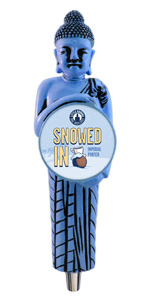 Notes: Snowed In is an Imperial version of our Last Snow Coconut & Coffee Porter. With a bigger body, higher ABV, and more punch, Snowed In will bury you in an avalanche of winter flavor.
View: Beers | Place Reviews
Reviews: 6 | Ratings: 98 | Log in to view all ratings and sort

Pours with a Porter like dark brown. Its thinner than an Imperial Stout so it gets the Porter part right. Smell of coconut. Tastes of coconut. Very sweet and enjoyable.

The smell is roast, vanilla, lots of coconut and milk chocolate, sweet on the nostrils. The flavor reminds me of a Mounds bar. The coconut is really in charge here, dark chocolate, roasted malts. This is unbelievably well balanced and put together. Smooth easy finish.

This is just downright delicious and drinkable. No gimmick, you can drink this over and over.

On tap at ChurchKey for 2014 DCBW. Snifter glass.

A: Pours blackish-brown with a finger of beautiful dense and well-formed dark brown head. Big swaths of lacing and excellent retention. Hard to imagine a better looking porter. (4.75)

S: Loads of toasted coconut up front, ample melted white chocolate and dark coffee, fair amount of roastiness. Definitely not for the faint of coconut. Smells appealing, but is really, really heavy on the coconut. (4.5)

T: Dark roastiness blends nicely with toasted coconut, which is again very prominent. Light to medium dose of coffee and charred roastiness which imparts a slight bite. A touch of sweetness adds to the palate, which unfortunately becomes a bit cloying over the course of a glass. (4.25)

M: Medium-light, fuzzy carbonation and medium body. Mouth coating and a bit sticky on the lips. (4.25)

O: Very nice, but the huge flavors and sweetness really limit the drinkability. Would be good in 4oz as after dinner digestif along with a dessert that pairs well with coconut. (4)

Poured on tap at Churchkey DC into a snifter glass.

A good mix of black/brown walnut colors for the body, quite solid and dark. Tan thick collar actually and lots of spotty lacing while drinking.

Great chewy creamy and rich coconut nose on this thing. Ripping with cream and vanilla tones, lots of coffee richness and espresso like roast. Light toasty notes and aromas of roasted malt, along with ripping beans of coffee. This thing is downright crazy, something a barrista would make you than you would find at a beer bar.

Really interesting character to these beers, but they also seem to lack some memory of the base ingredients sometimes. A worthy beer worth trying though for sure, but missing much "beer" like memory and character, but then that's what makes it so impressive.

A- Dark brown that almost appears an opaque black, minimal carbonation and just a slight head.

T- Coffee, milk chocolate, balanced coconut extract, slight caramel. Very similar to Last Snow except the increased alcohol cuts the sweetness a bit while still retaining a nice smoothness. In my opinion this is slightly better then Last Snow.

O- If you've tried and liked Last Snow then you'll definitely like this. The imperial version smells almost identical and tastes almost the same with a bit of sweetness cut from it, which in my opinion is a good thing. Definitely worth e try and probably one of the better imperial porters out there.

On tap at the Maple Bacon release. Served in a plastic cup.

Smell - Coconut and an earthy coffee aroma. Milk chocolate. Smells like Last Snow from the Lounge.

Taste - Coconut, but it has a sharp acidity to it. The coffee is pretty rich, though. Roasted malts behind it in the form of bittersweet chocolate.

Mouthfeel - Not as creamy as Last Snow, which is my primary complaint. Sharp and a little astringent.

Overall - This has all the flavor that Last Snow has when Morgan brews it at the Lounge, but it's just a bigger beer. I don't see why it's necessary for the same flavors to come out of a more alcoholic beer, but at least it has the flavors that Last Snow used to have. It's unfortunate that the new brewery has had to cut corners so much on the original beer that this imperial version is necessary to harken back to the far-better Lounge version.

Snowed In from Funky Buddha Brewery
Beer rating: 98 out of 100 with 98 ratings