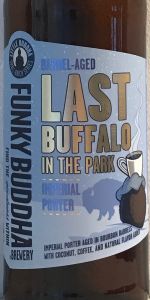 Notes: This Imperial version of our Last Snow porter is a rich, thick, decadent treat. Pitch black and viscous, it's made with coconut and fresh roasted coffee. We then age it in Bourbon barrels for months to accentuate the vanilla and coconut notes. Originally brewed in collaboration with our friends at Park Tavern in Delray Beach.
View: Beers | Place Reviews
Reviews: 134 | Ratings: 888 | Log in to view all ratings and sort
Reviews by MilwaukeeBeerMaker:

Admittedly, I am not a big coconut fan but this was outstanding. Good mix and balance of coconut, vanilla and barrel character. Glad I was able to get a small pour of it; would definitely seek out a bottle for my own.

Nothing compares to weekend, holiday, or snow-day mornings when we’re able to partake in a grown-up breakfast or brunch beverage. The well-known bloody mary, mimosa, or amped up coffee usually do the trick, but brewers have also been making breakfast-inspired beers for a good while now. This flavorful beer brings next level adulting to your a.m. drink game.

I had the pleasure of trying Funky Buddha's Barrel Aged Last Buffalo In The Park at our Extreme Beer Fest in Boston last month. There was a lot of hoopla from the crowd, so I knew I had to check this one out. It’s an Imperial take on the brewery’s Last Snow, a Porter that’s brewed with coconut and coffee, another great example of a beer that's primed for breakfast. But while Funky Buddha has brewed hundreds of different beers using all sorts of ingredients, these guys aren’t just shooting from the hip. “We were given some barrels from a great account for us [Park Tavern] in Delray Beach,” says co-owner and head brewer Ryan Sentz. “So it was a combination of it being a take on Last Snow using Buffalo Trace barrels from our friends at Park Tavern.”

Last Buffalo is clearly an Imperialized beer with a warming alcohol hitting 11.5 percent alcohol by volume and a lush, full bodied mouthfeel you’d find in a souped up adult coffee drink. Serving it at cellar temperature is the secret to hitting the sweet spot; every aspect came forward for full enjoyment. From the roasted coffee and coconut, to the faint booziness of bourbon, roasted grain, and even a bit of vanilla from the barrel aging, there's a lot going on here. Sentz didn't find it especially difficult to balance all of these flavors though. “We had experience with these ingredients with Last Snow, so it didn't take much tinkering to get it right.”

With everything that is going on in this brew it still stays very true to its style as a Porter. This latest batch was a limited run, but I certainly would not mind running into Barrel-Aged Last Buffalo more often. Trying to think like a dedicated beer geek, I asked Sentz about increasing its availability and whether there might be some variants to come from this brew in the future. “There is so much going on with this beer that I think doing a variant might be difficult,” he says. “That being said, we will definitely attempt a few. As for availability, I think we will continue to increase production if there is enough demand.”

I don’t want to pigeonhole this Porter as solely a breakfast brew, though it definitely qualifies. I will say, however, that the first beer of the day is often the best.

On tap at Maple Bacon Day. Served in a plastic cup.

Taste - There's that barrel. Nice whiskey flavor. Coffee and coconut in equal portions. Some oak. Slightly sharp oak. Lots of lactose sweetness in the back end.

Overall - This is really excellent. Not quite Morning Wood, but it's much better than Snowed In.

Got a pour of this gem at EBF in Boston, MA.

It pours fairly standard, as barrel-aged stouts go, thick, dark and black, with no head or lacing.

Smells decadent as all hell, so much shredded sweet coconut, a bit of chocolate, some vanilla, caramel, and roasted malt.

This one is light on the coffee, but uber heavy on the coconut. They absolutely nailed the sweet shredded coconut flavor here, it's so fresh, and in your face. Absolute essence of coconut. There's some sweet chocolate syrup flavors too, with some vanilla bean, and just the slightest hint of bourbon.

This is medium bodied, not all that thick, but certainly not thin. There is no alcohol noticeable here, which is awesome.

This was the 2nd best beer I had at EBF behind Good Morning. It shows how talented the brewers at Funky Buddha are at incorporating adjuncts. The coconut flavor here is so phenomenal.

A: Opaque black with a thin almost non existent tan head that dissipates quickly.
S: Bourbon, coconut, dark chocolate, coffee and a slight nuttiness
T: tastes like a coconut brownie. Sweet but not cloyingly. Bourbon that doesn't overwhelm
F: Just a tad on the thin side. But does cost your palate and lasts for a bit
O: This beer is amazing. A huge improvement over last snow. Great choice for a snowy day

Beer was very dark with no light passing through. No head on top of it. Smells very sweet with the bourbon and and coconut. Tastes even sweeter than last snow. Can't taste the bourbon, only coffee and coconut.

It's hard not to give this a 5/5 across the board. This beer is simply fantastic. One of the best beers I've ever had. The warmer it gets, the more I like it. If you love BA beers, this is a must-have. Great job, Funky Buddha.

It's a damn shame I only got to have this as a 2 oz pour at EBF. This was by far the best beer of the festival for me. It drinks like delicious chocolate, coffee, coconut syrup. A stunning imperial stout!!!

Funky Buddha is killing it. Had this side by side with a bourbon county 13 Prop and this was better. Granted it is totally unfair to compare fresh Last Bufffalo coconut and coffee with an aged beer. Just super creamy complex near perfection. Barrel, vanilla, and coffee complexity and harmony in a glass. Was ranked unanimously top 5 in a bottle share which included OG rare (easily #1), Prop 13, Bramble Rye, and Maple Mexican Cake! Simple superb brew.

look : Poured on 1-24-17 into siftner pours thick with a thin receding head that eventually runs out.
Smell: was incredibly delicious tones of sticky roasted coconut accompanied with a chocolaty fudge and undeniable roasted cofffee lingers heavily bliss.
Taste: taste exactly how it smells!
Feel: was very nice thick creamy something like a milkshake yes!
Overall: out of this mf world!!!!! This is one if the most delicious beer I've ever had in my life period!!!!

650ml bottle, 2016 release. Served in a snifter glass. Pours a dark chocolate brown body, mocha head comes up to about one finger, good retention, thin film, nice lacing. Smell is intense roasty coffee, more coffee, milk chocolate, touch of white chocolate, and bourbon sweetness. The coconut isn't really there. But the coffee is great. Flavour is more intense roasty coffee up front, transitioning into a milk chocolate, white chocolate sweetness followed by bourbon and a dash of coconut. That's pretty nice. It's all there for you to taste. Mouthfeel is medium bodied, creamy, smooth with a nice coconut and white chocolate sweetness on the backend. Another hit from Funky Buddha, I think I like this batch compared to last year's Snowed In.

Pitch black color, no light getting through, little foamy head on top too.

Overall what more could you ask for, maybe a hint more bourbon, but otherwise as phenomenal as I could have expected.

Had it a Funky Buddha brewery on release day for their Maple bacon coffee porter. They had an insane amount of beers that day, and i spent about 6hrs there, yet The Last Buffalo is the only beer I had more than once. Delicious in both smell and taste, this sticky malty & syrupy treasure is one i will be hunting for a long time.