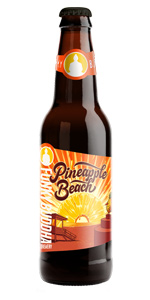 Notes: Put your feet in the sand with a beer in your hand. Our tropical and refreshing blonde ale is kissed with gnarly waves of juicy pineapple. A dose of floral, American hops and crisp pilsner malt makes this beer ideal for any sun-soaked day.

at 305 Brews Miami for HH on tap.
Look: straw/pale gold with a very thin white head that disappears within secs of receiving my pour. no lacing. beer is perfectly clear.
Smell: light cereal from malts, mild fruity esters and some pineapple. no hop presence on the nose.
Flavor: not much of anything... very little pineapple. just an unbalanced bitterness and some semi harsh astringency that hits the palate. Just blah.
Feel: light to medium body. oily, creamy texture and moderate to low carbonation. moderate to strong astringency. Finishes with that unbalanced bitterness lingering... a little too long.
Overall: this is a mediocre beer. an unbalanced mess. an experiment that did not work out unfortunately. and its FB's new year-round... what? yes.

I'll try anything once... well, maybe not. But, at least when it comes to beer, I'm pretty much game for anything at this point. I've had plenty of really crazy brews that, at first glance, seemed like something dreamed up by the brewer(s) when drunk off the contents of their own personal cellars, but which actually worked better than I initially would've given them credit for. So when Funky Buddha drops some stuff off with unique and interesting flavor concepts in my neck of the woods, I'm liable to jump (for joy!) at the chance to get in on that. A pineapple-infused blonde ale? Sign me up. That doesn't even sound too far-fetched.

But it's not really good.

The pour on this is rather off-putting. Other reviews indicate that it is strikingly clear, but my bottle was chock-full of sediment and unsightly pineapple/yeast floaties. They seem to kind of float freely in the yellow-ish orange beer, semi-suspended, and their appearance here is really flat-out unlikable. The head is a meager ring of white foam that leaves behind zero lace and bears nothing special in terms of legs or retention. Not a good first impression at all.

Nose isn't much of an improvement, with some cooked vegetable notes, some sweet pineapple (the kind usually found in grocery stores, smothered in heavy syrup) and light straw-like pilsner malt. Not a fan of the nose here either. Perhaps something is weird with my bottle.

Flavor is definitely better, but not by too much. It has a decent pineapple flavor, but there's still a little DMS or vegetable kind-of note that doesn't convince me to like this beer. The malt base and hops seem well built from a recipe standpoint, with some nice crackery notes behind the initial wave of pineapple and orange, but the deadly-sweet finish really stops this in its tracks and becomes too much before long. Nah.

Feel is on the heavier side of medium for the style, especially when you take into account that this clocks in at a cool 5%. I would be loathe to spend a day at the beach "pounding down" this swill. Funky Buddha... I think I'll approach with a bit more caution around some of your beers from now on. A pity really, with this one, as I've really liked most of their repertoire that I've been able to acquire in MA.

Pours a dull shade of lighter Amber, with a moderate haze, minor head and then leaving a small bubble film and thinner collar.

On the nose it's thinly of pineapple juice

I get notes of more grapefruit juice and malty sweetness

Put it all together and you get a a thin, lightly flavored brew that's dominated by pineapple juice notes and is on the sweet side...one and done here for me

Gold in color with a very hazy complexion. There's a fingernail of bright white around the rim. Light lacing. The aroma is of pineapple and light malt. I taste light malt and sweet pineapple. The mouth is light and quaffable.

Picked this up when I was in Florida back in November, as I wished for a 'Pineapple Beach" of my own. While this certainly win any awards, this was a fun beer that was filling, easygoing, and had the feeling of a Pilsener underneath it's slightly gimmicky-but-pleasing exterior!

Of course, the pour to this beer was blonde, bright, and nearly clear. Not a lot of head to this as it quickly settled and the only lacing on my pint glass was near the top, in the form of a few rings. While they weren't pineapple rings, there was plenty of that in the aroma along with straw and cereal. This lightness continued on in the taste with minimal malt and body to back it up. Sure, the Pilsner Malt had to be in there somewhere but it was so faint as to nearly recede into the background. True to form, there was light bitterness here with some hints of grape juice and some light grain to it. Not much of an aftertaste but the pineapple remained in the form of a juicy slickness that stuck around on my teeth for a while.

There had to be alcohol in here somewhere too but it was hard to discern. For the Sunshine State, this was a fitting beer that called for another once it was finished off. Bottled on 9/25, it held up well but wasn't anything outstanding in any aspect. Given how cold it's been outside, I'd give anything to have one more of these on a nice November night below 30 degrees latitude - what else could one ask for down there?

Poured out a clear, golden color with a small, short-lived head. It smelled of faint pineapple notes and caramel. Sweet pineapple taste is muted with toasted caramel and a mild bitterness.

A: Pours a hazy medium golden yellow in color with moderate amounts of active visible carbonation rising from the bottom of the glass and moderate burnt orange + honey colored highlights. The beer has a three finger tall dense sudsy foamy off-white head that slowly reduces to a couple of medium sized patches of medium thick film surrounded by a large patch of very thin film covering the remainder of the surface of the beer and a thick ring at the edges of the glass. Moderate to significant amounts of lacing are observed.

O: Easy to drink with well hidden alcohol and refreshing - the combination of the lightness of body and the slightly sweet pineapple juice make a combonation that is really nice for hot weather and being at/near the beach.

L: Poured from a can to a pint glass. Had a yellowish color and a cloudy consistency. There was a thin, foamy head that lasted a below average amount of time. Pretty good lacing.

S: A decent aroma of pineapple, hops, malt, a floral quality, and some citrus.

T: Tasted of a small amount of malt (mostly in the finish), a tinge of the floral quality, a moderate amount of hops (not that much), a good shot of pineapple, citrus (lemon), and some random tropical fruits. A decent enough flavor, but not quite as effervescent as you might think. Still, it's light, fruity and sweet.

F: A solid amount of carbonation with a slightly slick finish. Light-bodied.

O: This is the kind of beer that would be good for the summer months. Worth a look.

Pours clear , gold in color with 1/4 inch head. Taste is grain, honey, and pineapple juice. Sweet with extra sweetness at the end, light bodied, with high carbonation. Tastes like a good kolsch. Really wanted more pineapple flavor. It is present as pineapple juice at the end but it does not pop. Not a bad beer, but a bit of a disappointment given the expectations from the name.