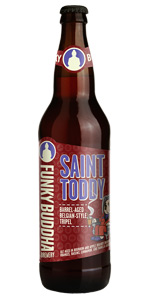 Notes: Pull up your favorite high-back chair and get cozy with Saint Toddy: our take on the classic cold weather warmer. This Belgian-style tripel is barrel-aged in both Bourbon and apple brandy barrels, then combined with orange peel, cinnamon, and mulling spices. Warm and serve for a luxurious experience, or drink cold and savor the season.
View: More Beers | Place Reviews
Recent ratings and reviews. | Log in to view more ratings + sorting options.

4.06/5  rDev -3.6%
look: 4 | smell: 4.25 | taste: 4 | feel: 4 | overall: 4
Pours a murky dark burnt-orange with hues of brown. Head is a finger and a half off just-off-white foam that retains well. Aroma is loaded, hitting with notes of cinnamon, nutmeg, vanilla bean, orange peel, apple brandy, char, raisins and toasty, caramely, bready malts. It firms lands on the 'sweet' side of the scale between sugary and bitter. Flavor profile is very similar, offering up a laundry list of notes with an extra sprinkle of sugar on top. Cinnamon, nutmeg, vanilla bean, raisins, toffee, molasses, plum, char, apple brandy and toasty, nutty, caramely and bready malts forming the base. That base is a little weak for the layers of flavor on top, leaning the structure into 'firmly sweet' with not enough to bring within equilibrium. Mouth feel is medium in thickness with a crushed velvet effervescence at the back of the throat that elevates this a notch or two past slick and smooth. Overall, a sugary soup in each and every sip. It's not to say it's bad, but it firmly leans towards being served as a dessert beer or something to be shared with others in smaller doses.

Served in a 15.5oz Speigalau tulip from a 22oz bottle.

4.31/5  rDev +2.4%
look: 4 | smell: 4.25 | taste: 4.5 | feel: 4 | overall: 4.25
On tap at the brewery and poured into a snifter. A hazy amber color with a small white head. Impressive aroma with apple brandy, vanilla, bourbon, and cinnamon. The taste was even more complex. All of the above flavors were there and the barrels closed it out leaving a beautiful finish. Not a lot of classic Belgian character it who cares? The cinnamon is well done and not heavy handed. Outstanding.
Feb 21, 2019
Rated: 4.75 by JamesLeung from Florida

Pours a hazy burnt orange, with a one inch foamy head and some foamy lacing. Aromas of apple brandy, apples, raisins, cinnamon, vanilla, some Belgian yeast, faint orange, a hint of bourbon. Wow, smells great. The taste is similar, if not quite as intense as the nose- apple brandy, apples, cinnamon, raisins, some vanilla, malt, Belgian yeast, light bourbon, a little orange and oak. Smooth, a solid lighter to medium body, well carbonated.

This is a terrific beer. Incredible apple aroma and flavor, the brandy barrels are great. All the add- ins are prominent too, with the cinnamon taking center stage. The bourbon only shows a little in the flavor and the Belgian aspect gets a little buried, but there’s no negatives here.

Reviewed by Kurmaraja from California

Reviewed by ryan1788a5 from Massachusetts

T: Apple brandy, cinnamon, orange peel, mulling spices. Raisins. Warm vanilla. Oaky bourbon in the background. More of the base tripel comes through, with some clovey yeast and a doughy malt base with a hint of confectioners sugar. Alcohol becomes apparent as it warms and brings its own bitterness. Lingering brandy and spice finish.

M: Big and thick in body with a heft that presses its weight gently into the tongue. Carbonation prickles at the tip of the tongue, but isn't as expressive as your average tripel.

O: An interesting beer, conceptually. It works too. It ends up coming across as more of a mulled cider in feel, though the base tripel comes through enough to keep it in beer territory. It probably won't be for everyone, as it colors pretty far outside the lines. I enjoyed it though. They suggest trying it warmed too, and that seems like it would work well if you're a fan of mulled ciders/wines. A good brew to try this autumn if you're looking for something different.

Reviewed by earljones199 from New Hampshire

Reviewed by Phineasco from Massachusetts

3.98/5  rDev -5.5%
look: 4.25 | smell: 4.25 | taste: 3.75 | feel: 4.5 | overall: 3.75
Look: Orange/brown, murky, with two inch head that recedes quickly.
Smell: Orange, nutmeg, raisins, apples, with brandy to top it off.
Taste: Orange, raisins, toffee, figs, apples, and a touch of brandy.
Mouthfeel: Complex, and not boozy at all. The barrel; especially the Bourbon gets over powered by the spices.
Overall: An interesting non-traditional triple, but I probably don't need another bottle.

The bottle states Barrel-Aged Belgian-Style Tripel ale aged in bourbon and apple brandy barrels with oranges, raisins, cinnamon and vanilla added. That about perfectly sums up the aroma, which I'd say also includes red apples, spices like allspice, cardamon and brown sugar, some citrus zest and apple pie. Incredibly complex with a tremendous spice presence that makes it pleasing and confusing at the same time. I generally don't like winter warmer style beers, but this was like a fruit cake or pie with some booze and syrup drizzled on it. Like Muy Bonita, Maple Bacon Coffee Porter, Last Snow and Wide Awake It's Morning, this is another amazing smelling nose from Funky Buddha.

Tastes like it smells but with some more citrus notes, graham cracker, coriander, more apple like a sour green apple or fresh warm apple cider with cinnamon and spices, mild booze which seems like tame brandy or bourbon, and then a fresh slice of apple pie or more like a Drake's Apple Pie with the sugar coating the bready crust.

The bottle states 11% ABV, but I don't detect that at all as this goes down smooth even with the spices so evident. This brew has a nice feel, a ton of dynamic complexities, and like most of the other Funky Buddha beers I've tried, it represents craft beer experimentation at the highest level. These people are not just making great beer with hops, they toss in everything including the kitchen sink and make it taste delicious. Buy Funky Buddha beers people, live a little!

Nose erupts with everything I expected it to, basically a horchata/holiday nog/spice cake, etc. big burst of cinnamon comes out front, followed by a big apple aroma, baked apples with spices, apple pie for sure, some raisin, brandy soaked raisins and straight up apple brandy, a little sweet orange peel and a cointreau like aroma, flashes of a bourbon old-fashioned in the background, a bit of vanilla, some eggy french toast, with a little sweet candy malt, toffee, fig, maybe biscuity but hard to tell, faint alcohol, great aromas but unlike most of their other great beers this one really lacks the tripel.

Taste starts fairly sweet, but brings everything I expected again, eggy French toast, Belgian waffles with cinnamon and baked apples on top, a-la mode from the vanilla creamy ice cream notes, lots of cinnamon but not overpowering, tons of apple, baked apples with the skin on, apple brandy, a bit of booze soaked raisins, added to the mild orange candy, the cinnamon and the apples it reminds me a lot of the tzimmes my grandmother used to make (minus the carrots of sweet potatoes), again orange liquor cointreau, a slash of a bourbon old-fashioned again, candied fruits, with a touch of phenol spices, and booze warmth, very little belgian malt and candi sugar. Again delicious but where is the Belgian tripel?

overall a delicious enjoyable beer, but hard for me to judge as the Belgian tripel is barely there, it's like they just needed to call it something to throw all the flavors into, fun flavors at least, but many of their other beers in the same boat at least the beer shows through and I don't feel like I'm drinking some fruit blend barrel aged and spiced mulled wine.

Reviewed by Boccu from New York

A- Cloudy almost murky copper gold pour from the bomber to a becher. The cap is white with a foamy consistency and it peaks at half a finger high. A wide ring delivers massive sheets of lace to the glass.

S- Uhhh apple cinnamon desserts. I suppose I could see the Toddy aspect but the sweet apple cinnamon rolls prevails. Honestly not much else. Apple pie vanilla crustiness, so much dessert to the aroma. Cinnamon donut in short.

T- Again, the sweetness is not syrupy or heavy chain caramel but it pretty much drives the experience and removes a bit of the Toddy spirit. Apple pie with the vanilla, cinnamon, pie crusty butter and sweetness in full effect. Too much cinnamon and apple flavors. Seems like some lemon zest eventually cuts in when it warms up.

MF- Medium overall thickness with a slick and foamy texture. The carbonation is at a medium level. Ends slightly warm.

Just not my style. The apple, lemon and intense cinnamon are just too intense for each other especially when the big sweetness is taken into account.