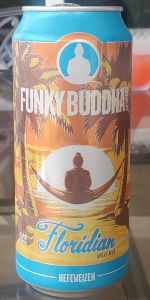 Notes: Our unfiltered and refreshing German-style wheat beer is full on flavor yet light on the palate. Authentic hefeweizen yeast creates the compelling aromas of bananas, citrus, and cloves, while the all wheat and malt body perfectly captures the brilliance of a golden Florida sunset.
View: Beers | Place Reviews
Reviews: 132 | Ratings: 710 | Log in to view all ratings and sort
Reviews by GRPunk:

S- Bananas clove and a solid dose of lemon

M- Creamy with a peppery bite

O- Good classic take and an easy drinker on a hot day.

A - Poured standard 12 oz bottle into standard pint glass. Non-existent head, no lacing. Cloudy sunset color. Claims to be unfiltered but, unlike it's German counterparts, there are no remnants of yeast or wheat settled at the bottom of the bottle. Thus, it must be filtered to some degree.

T - If there was such a thing as a Hefeweizen light, it would be this beer. With that being said, what it lacks in overly sweet, full-bodied flavor, it more than makes up for in its refreshing character. This beer does something magical- it turns the hefeweizen style into a amazing tasting wheat-inspired, easy drinking, pilsner.

M - Beyond crisp, clean, and refreshing. You could drink these in 90 degree weather at a beach.

D - Fantastic. This beer is very sessionable. That's a rariety for a hefeweizen. With that being said, this isn't so much a true hefe as it is a hybrid. It is a good hybrid though. It's not the best domestic hefe I had by far but it is memorable and enjoyable. I would absolutely buy this one again.

Poured from a 12oz bottle into a Cigar City pint glass.

The nose is banana,bread,wheat,and hints of citrus.This beer has a nice sweet smell to it.I also get a small hint of yeast,nothing offensive...Very pleasant actually.

The palate follows the nose I get wheat/yeast blended with banana/citrus.Again it has a nice sweet and also sticky taste to it.

The body is medium light,with a slight silky texture it.Smooth,dry finish, with slight tingling on the tongue from the carbonation.

I'm not a huge fan of wheat beer,but this is a nice beer for a hot summer day.One thing I will mis about Florida is,sitting in the pool,and watching tv on the back porch,while drinking Floridians!!! This is a very refreshing beer.

My old neighbor from Oswego gave me a bottle of this. It poured a hazy orangish with no head and no lace. The scent had hints of banana. The taste was nicely balanced and easy to drink. Touches of clove provide some spice to the sweet malt. The mouthfeel is lighter in body with good carbonation. Overall its a decent beer.

I can say it taste good but the after taste got me sick if you drink too much of it. I have to say its way too expensive in a gas station for a 6 pack its about $12 which is not worth it even if its 7% alcohol. I had to go to Total Wine for a cheaper price of $8.99 for a 6 pack but you can get cheaper beer for way less like Steel Reserve or Colt 45 Black that has 8% alcohol but with a worst taste. It taste good when its API but damn it gets me dizzy sick if I drink all 6. I dont recommend to drink all 6 in one day its a beer to drink once in a while but not every weekend or every day.

Nothing like bringing a good growler of beer home from your local brewery. I'm not usually a big hefe fan, but the floridian hefe is by far my fave hefe. Wonderful citrus smell and hazy yellow/orange hue to this beer. Not lemony at all which i seem to equate with most hefe's i've had in the past. Gotta love the buddha!