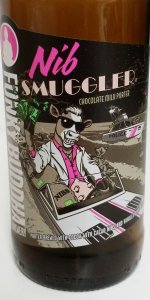 Notes: This is the finest, purest black. Cocoa straight from the source: the rugged mountains of Brazil, where chocolate is life. We smuggled these beans back to our brewhouse, where they were blended with creamy milk porter and fragrant Madagascar vanilla beans. Get cocoa'd up.
View: More Beers | Place Reviews
Recent ratings and reviews. | Log in to view more ratings + sorting options.

4.21/5  rDev +1.7%
look: 4.25 | smell: 4.5 | taste: 4 | feel: 4.25 | overall: 4.25
On nitro at the brewery. A deep brown color with a medium tan head. Great lacing with huge sheets of foam on the glass. The aroma was fantastic. Massive fresh cocoa and vanilla. The taste did not disappoint. Coffee, cocoa, and vanilla flavors with a lactose sweetness. Creamy feel from the nitro. Well balanced hop presence. Outstanding.
Feb 21, 2019
Rated: 4 by PaleAleWalt from New York

Reviewed by ryan1788a5 from Massachusetts

T: Follows the nose. Roasted barley anchors it, but bold chocolate is the top note. Tastes like Hershey's syrup. Big pull of vanilla too. Faint fruitiness in the background. Finishes with chocolate and mild roast.

O: Fairly one-dimensional, but hedonistic. Not a bad drink if you're in the mood for a "candy bar in a glass" sort of beer.

Reviewed by ThickNStout from Georgia

Pours black with a half finger of khaki foam. The head recedes to some wispy surface haze and a thin halo, leaving only a few dots of lace.

Smells of milk sugars, soft chocolate and some caramel.

Sweet, distinctive lactose character is immediately present in the flavor. Other notes of cocoa, caramel and a little bit of roast. On point for the style.

Fairly light body but slightly creamy with subtle carbonation. The aftertaste highlights that pervasive milk sugar character along with some chocolate and light roasted malt.

A solid offering from Funky Buddha. This is a well made chocolate milk stout and worth a try for fans of the style.

Rated by Tdnarba from Florida

Reviewed by KanglinTampa from Florida

Rated by Tludke from Florida

Rated by unclejazz from New York

Taste: Chocolate forward, with the caramel and vanilla building; a creamy element arrives, through the middle, adding more sweetness that lingers into the finish

Overall: A nice beer if you like chocolate beers that verge in a sweet direction; my preference is for more balance and complexity, however, and I much preferred the MBCP that I drank after this beer

Nice, dark pour to this as the beer was thin, brown, and the epitome of chocolate. Not a lot of head to top it off as it quickly faded and there was hardly any lacing to be seen down the side of my pint glass. Lovely, muted aroma of milk chocolate, cocoa nibs, powder, and vanilla beans with all of those coming out in the taste. Soft lactose sweetness came in the taste over a wonderfully creamy mouthfeel that made this such a joy to sip and behold. A mild amaretto roasted undertone emerged as this warmed up but this wasn't a typical American Porter by any stretch. A light mouthfeel allowed the flavors to fully emerge and linger though some heavier malt could have taken this up a notch or two.

This almost felt like a Chocolate Stout or a candy bar in liquid form as it straddled the line between styles. Bottled on 11/6, this was bought shortly after and tasted as fresh as could be two months later. Easily among Funky Buddha's best, this was one of the most accessible American Porters I've ever had, and the one I'd reach for first at dessert time. Enjoyable on all levels!

4/5  rDev -3.4%
look: 4 | smell: 4 | taste: 4 | feel: 4 | overall: 4
A: Poured into a snifter to a black beer toipped by a dense finger and a half of light tan head which fades slowly to a collar around the edge of the glass with minimal lacing
S: Smells of intense chocolate with some nice vanilla notes and a little coffee. Slight roast malt as well but very adjunct heavy
T: Taste is huge chocolate notes with some nice vanilla backing. Slight coffee and roasted malts toward the back end that blend with a little biter dark chocolate. Swallow is more coffee and roasted malts with a lot more chocolate with some hints of vanilla
M: This beer is on the heavier side of medium with a slightly syrupy mouthfeel. Carbonation is under prickly but adequate for the style while the beer has a slightly drying finish
O: Overall this is a solid beer with some nice flavors. Adjuncts are a little heavy but the base beer still provides a few dimensions. Overall worth a try.