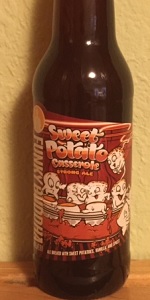 Notes: Drop the dressing and ditch the pumpkin, Sweet Potato Casserole is fresh out of the oven and ready to party. This fall treat is just like moms used to make - only if moms had penchant for gooey marshmallow, fall spices, and gobs of sweet potato cavorting in one sinful glass. Bottoms up.

This beer is spot on with flavor, one of my all time favorites!

Breweries need to learn that being different doesn't necessarily end up with a good beer. Brewing a good beer does. This one? I'm a gentleman so no comment.

The sweet potato & spices do come out strong in this beer. This is very pleasant, but it's a 1 & done type of beer for me. Sweet potato in a beer was not so bad maybe I will try a few more vegetable beers sometime anyways, cheers! B

Appearance: Semi-cloudy amber, with a light off-white head and little to no lace.

Aroma: Sweet and malty, with sweet potatoes and spices, yep!

Taste: Sweet but not cloyingly, thankfully. Hint of vanilla brings out the marshmallow in this brilliantly well-sculpted beer approximation of the classic American holiday side dish. Pretty tasty and much better than expected from a gimmicky brew.

Draft 12 oz tulip at the brewery in Oakland Park FL. Old gold thin white head. This one is really sweet , even the aroma. Vegetal flavor not very reminiscent of sweet potato and the sweet not much like marshmallow. A big let down after all the hype. It’s drinkable just not sweet potato casserole. Had this with a bratwurst, maybe the wrong food pairing choice?

This was another beer that I picked up from a Publix in Florida while I was away in November. This looked crazy and sure enough, it was just as odd as I imagined it being but at the same time, I ended up coming to like it because it wasn't like anything that I ever had. Sure, it's not fall now but if I were to redo Halloween or Thanksgiving on this frosty night, this would be one of the brews that I'd want to crack open before the night was out.

Not a bad pour to this as the beer was a warm chestnut in hue with a moderate head that didn't last long, nor was enough to fill up the remainder of my pint glass. Tons of sweet potato, marshmallow, cinnamon, and sugar in the surprisingly potent nose with all of those present in the taste as well. It was warm, sugary, and inviting from the first sip and not that artificial; given everything that was present here. This didn't come across as a Fruit / Vegetable beer as it was somewhere between an Octoberfest and a Stong Ale...if that was even possible.

Plenty of booze was present here though it wasn't a distraction by any means. As it warmed up, there was a bit of wood and nutmeg to be found here as this nuances were in play here underneath the brown, sugary tone that this took. Dated 9/5 of last year, this held up well and was even fitting for a frosty night such as this. While a bit to sweet to be great, I loved the intrigue and uniqueness factors of this beer and wish that more would take a chance like this. Like Pumpkin Pie, this didn't have to be enjoyed during the holidays, or during autumn for that matter. Props for Funky Buddha for taking a risk with this, and passing with flying colors!

A: Poured into a snifter to a deep golden orange topped by a finger of dense off white head which fades quickly to a collar around the edge of the glass
S: Smells of fall spices with cinnamon and nutmeg with some marshmallow and sweet potato notes.
T: Taste is sweet potatoes, cinnamon and nutmeg, and marshmallow sweetness. Swallow is more cinnamon and nutmeg with some more marshmallow and sweet potato.
M: This beer has a medium amount of body with a slightly thick and syrupy mouthfeel. Carbonation is a touch on the flat side. The beer has a slightly drying finish
O: Overall this beer isn't bad for a fall seasonal. Tastes like a pumpkin beer without the pumpkin. Mostly spice driven with a decent amount of sweetness. Tastes like sweet potato casserole so well done.

A great offering from a brewer that I'm really beginning to like quite a bit...

A perfect dessert beer at the end of a great, family Thanksgiving dinner. Coloration reminds you of sweet potato, even though the foam is thin and short-lived. The smell is lightly of sweet potato, cinnamon, and pretty much none else. The feel around the tongue is a tad more carbonated than I like, but creamy and lends itself to being pounded, something to be careful with considering this is at 8% ABV. Taste-wise it was very flavorful, much sweet potato, a good blend with malts, and overall sweet without being sickening. A great beer to have on hand, I need to buy a few leading up to Christmas...

It pours very viscous and burnt orange/brown in color. The nose is of cinnamon buns, s'mores and spices. Lots of cola too. Same goes for the taste. Overly sweet with a late bitterness. A bit overwhelming.

Ah, the pleasures of both having a local, in-person trader as well as being the owner of The Bottle Backlog at Chez Woody! Tone77 had dropped this off for me on one of his visits, but it just did not seem to dovetail with anything else in the queue & kept getting shunted to the side until now.

From the bottle: "Find the goodness within."; "Fully Baked"; "Drop the dressing and ditch the pumpkin, Sweet Potato Casserole is fresh out of the oven and ready to party. This fall treat is just like moms used to make - only if mom had a penchant for gooey marshmallow, fall spices, and gobs of sweet potato cavorting in one sinful glass. Bottoms up."; "Ale brewed with sweet potatoes, vanilla, and spices".

The bottle directed me to "Consume Fresh", but since that was outside of the realm of possibility, I Pop!ped the cap & conducted a gentle pour. Once decanted, a vigorous in-glass swirl raised just under a finger of foamy, tawny head with decent retention. Color was Amber to Deep Amber/Light Copper (SRM = > 9, < 13) with NE-quality clarity. Nose was quite spicy with cinnamon, clove & nutmeg underlain by vanilla and accompanied by a definite alcohol presence. It was reminiscent of a Pumpkin Ale, and yet it was somehow different. Time had really allowed the spices to become dominant on the nose. Mouthfeel was medium. The taste was eye-openingly spicy! If they did not use cinnamon, then I am a marshmallow's uncle! Between the inherent spiciness & the fusel alcohol heat, my sinuses were wide open & my taste buds were standing at attention. My eyes even watered a little bit. I was drawn in and fooled by the cute-looking sweet marshmallows on the label, only to be waylaid and shanghaied by a cleverly concealed serving ladle! OMFG. I just wanted to drink a beer, not be spiced into submission. All joking aside, I really liked the way that this tasted. I would never deign to call it "sweet", which is what the label suggests, but instead, it was quite spicy, which I always enjoy. They recommended a serving temperature of 40 [deg. F], but I was thinking that it might be quite nice mulled in a double boiler. Finish was super dry, thanks to the spices. I may have to revisit this one in the Fall.