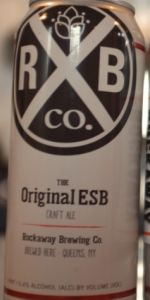 Notes: An English-style ale with an American twist. Amber in color with a malty under structure. Accompanied by smooth hop characteristics to compliment a subtle sweetness.
View: More Beers | Place Reviews
Recent ratings and reviews. | Log in to view more ratings + sorting options.
Rated: 3.5 by TMoney2591 from Illinois

Rated by Elarcicim from New York

3.86/5  rDev +2.9%
look: 4.25 | smell: 3.75 | taste: 3.75 | feel: 4 | overall: 4
On tap at Jacob’s Pickles, NYC.
Pours a clear golden color with a touch of amber. A large creamy head displays nice retention.
Aromas of nutty and biscuity malt, caramel, toffee, butterscotch and honey. There is also a touch of bubblegum, cinnamon like spices and floral hops.
Taste aligned with aroma. Malt forward and sweet with an emphasis on caramel, toffee, butterscotch, honey and biscuity malts. The hops provide subtle flavors of floral and earthy flavors along with a light bitterness. The finish is dry.
Medium bodied, smooth, buttery and with a gentle carbonation.
Well balanced overall. A nice example of an ESB.

3.56/5  rDev -5.1%
look: 4 | smell: 3 | taste: 3.75 | feel: 3.5 | overall: 3.75
Poured from a TORP into a plastic cup.
4/3/3.75/3.5/3.75
Lots of head, per ush from this machine, clear copper color with sticky lacing.
Smells coppery also, malty & metallic.
Tastes deeply and pleasantly malty. Bready sugars dominate the palette, with a mineral, earthy finish. Best cold, with a smooth, crisp feel and an almost mapleishly heavy sweetness (without the intensity).
A very autumnal beer, well executed in a style I don't particularly care for. Recommended for maltheads and ESBlovers.

Reviewed by Danstaats from New Jersey

Reviewed by intoxicnation from New York