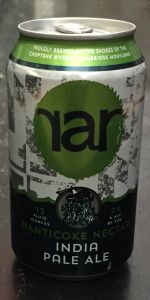 Bright burnt orange body, with some haze. Aroma is, uh, interesting. I was expecting lots of hops but there is this weird roasted malt character. Tastes better than it smells. Fair amount of bitterness. I had heard good things about this brewery, but this IPA was slightly disappointing and weird (not in a good way).

A fantastic IPA that can stand alone or work well with pub fare.
Appearance - a little cloudy, with a dark straw color
Smell- more malty than the taste would lead you to believe
Taste- piney and citrusy, one of the best IPA 's I have had. Hoppy, hoppy hoppy in a great way.
Overall- I am glad it is brewed so close to me.

What a week it has been for The CANQuest (tm)! I have been opening & reviewing CAN after CAN, but the majority have not been AIPAs & my self-avowed/self-described hophead self is really starting to jones. Man, gimme dem hops & quit messing around! My thanks to my local, in-person trader, tone77, for hooking me up with this one.

From the CAN: "Proudly brewed on the shores of the Choptank River in Cambridge[,] Maryland"; "Saving the Bay One Beer at a Time"; "Groove City Est 2013".

The Crack! was nice & loud, but since previous reviews had mentioned haziness/cloudiness, I employed a gentle Glug to see what I could achieve. It was to no avail as there was a haziness that began the moment it left the CAN. An in-glass swirl raised a finger of foamy, tawny head with limited retention. Color was a hazy Amber to Deep Amber/Light Copper (SRM = > 9, < 13). Nose had a sharp hoppiness, citrusy, but not precisely grapefruit, along with a pine tarriness. Hmm. Mouthfeel was medium. The taste was kind of muted, especially given the style and the nose. It was biscuit malt-forward, underlain by earthy hops with a lemony citrusiness. It really put me in mind of an EIPA vice an AIPA, although pretty big in its ABV. Finish was dry, but more earthy than bitter. This was a strange one and I am not sure that it would be worth revisiting.

At a shade over 7%, this baby drinks like a 10%-er. The extra bitterness gives away the fact that it is not. However, the resinous nose and palate are reminiscent of mightier offerings, such as Gubna and Enjoy By. If you're looking for similar notes, without the commitment, I can highly recommend.

Have had this IPA several times and really enjoyed it. A cloudy but smooth and complex IPA. The reason I enjoy this variety.

On tap at the Pearl Street Warehouse, Washington DC

Pours a nearly clear amber with a two-finger head and decent lacing.

The malt backbone in this particular IPA is very solid. Lots of caramel and biscuity toasted goodness on the nose, but with strong dank pine hops and floral notes prominent in the background.

The flavor follows the nose. The malts are present in the bready and caramel malt variety, with the hops arriving with almost no "fruit"--just solid resin and dankness. The touch of fruit is white-pulpy grapefruit.

The mouthfeel is solidly medium with a nice drying but not "crisp" finish. Well balanced.

Pours orange with a finger of head and touch of cloudiness. Satsuma and grapefruit on the nose, and a big hit of Citra citrus and bitterness on the initial sip. Malt sweetness anchors the mid-palate. Saturated with flavor.

Excellent summer beer with just the right balance of hop and crisp. Rar found a secret in the waters of the Choptank that to which other breweries would take care to pay attention.

This beer is so well balanced. One of the better IPA's being made in Maryland!

Appearance: hazy orange in color with a short 1" head that falls to a spotty surface covering.

Smell: light fruit and hop bitterness are picked up by the nose.

Mouthfeel: medium bodied beer. Crisp to start, smoother and a bit dry at the finish.

Overall: a decent brew that hits the spot and is satisfying.