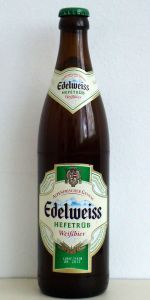 Notes:
View: Beers
Reviews: 33 | Ratings: 185 | Log in to view all ratings and sort
Reviews by shambeano:

500ml bottle, poured into the edelweiss wheat beer glass that i scored with the purchase.

A- Pours a cloudy pale gold, with about an inch of super fluffy white head that just doesnt look like its going anywhere. quite vigorous looking carbonation can be seen easily throughout the beer. looks like a weizen should. fantastic.

S- Clove and spice straight up, i could smell the banana as soon as i opened the bottle which in the glass seems to come towards the finish, a touch of bubblegum. very nice.

T- straight up im getting a touch of bubblegum, the banana is not as present as it was on the nose but still there, some citrus flavours make an appearance, followed by a clove spiciness. However the banana reappears just at the end. very tasty, very tasty.

M- light and spritzy, a nice length of flavour and a drying finish, good, but it leaves the mouth feeling a little oily almost, which seems to detract a touch from the rest of the feel.

O- wow, i tried this a long time ago when i wasnt into a wheat beers that much and wasnt impressed. But man o man, this was a treat, everything i like about wheat beers was in this one.

Pours light orange with a healthy amount of sediment. A finger of white head.

The nose is banana, lemon, and grass.

The taste opens hefe-like with banana and bread - peppery hops mid-palate. Light, easy finish with a touch of lingering bitterness.

The mouthfeel is creamy. Maybe the strongpoint of this beer.

On tap. Just slightly hazy golden color with white head. Aroma is classic with nice banana and clove esters and fresh yeast. Taste follows with sweet wheat and banana, quite clean and floral. Body is quite light for the style and has a crisp carbonation. Overall it has nice weissbier flavors but it doesn’t look and feel like expected.