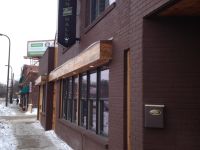 View: Place Reviews
Reviews: 7 | Ratings: 17 | Log in to view all ratings and sort

Very cool looking space. Love the chandelier and all the old-time beer sings. The beer is all very good with an impressive guest list. The bowling was good. Fun music in the bowling area. The food was a miss. 3 of the 4 people didn't their main dish and I didn't get what I ordered. However, I'd definitely go back to drink and bowl!

I love the open feel of the dining room with the chandeliers. I remember the place when it was an old time down trodden bowling alley right out of the 70's. What a transformation! Walleye sandwich is awesome. Full bar, so bring your non-beer loving friends! Good selection of town hall brewed beers and guest beers.

It is a chill hangout place. Kinda weird with a bowling alley, but also kinda cool. Had a few of the house beers. IPA was solid. And they had another dozen taps of guest beers. Food wasn't awesome but did the trick. If you are in the neighborhood, definitely go.

Town Hall Lanes the bowling version of Town Hall Brewery. I like that. Of the three current Town Hall locations this is certainly the one I frequent the least, but that is more due to its location than to what it has to offer. In my dozen of so visits I have yet to be unimpressed. The selection is similar to that of Town Hall Tap. They have the regular Town Hall line up plus rotating Town Hall seasonals, and a large and well put together guest tap list. They also have Town Hall's Super Strike Lager by the picture. I like the fact that I can get a quality picture of American Lager while I'm on the lanes. As for those lanes, they are well maintained, but a bit too oily for this avid bowler. The food is similar to the other Town Hall locations with the additions of a handful of nice pizzas. Overall, this is a really great place to visit to both if you are in the Nokomis neighborhood, and a reason to visit the Nokomis neighborhood.

In my humble opinion this is the best space of the 3 Town Hall facilities. It is located in an area that used to be run down, but is quickly snapping back. On road parking isn't difficult to find. The space inside has a brewpub feel. Decorated with a nice old wood bar, neon signs and HUGE chandelier. I believe there are about 10 lanes to bowl in back, which really adds to the excitement.

The service was outstanding at the bar. Mike took care of us, as it was a special occasion and it seemed that some initial reports was the service was poor..maybe he was making up for it. However, it was really great.

The food is okay...I don't think the owner puts too much effort in to this area...but that is okay with me.

The beer is great as usual. The only beer that is "special" to only THL is the lager, which was really good. A great beer to go with bowling a few frames.

This is a must hit place with a great vibe and great beer.

walked thru the 2 wooden front door and all the seats are to the right your eyes a drawn to a beautiful mirrored huge oak pillared mantel bar just to the rear of the seats.THL has an open well lit seating area with booths tables and stools with seating at the bar the lanes are back around to the right and rear of the bar very cool looking area, we were seated and ordered great TH food with great TH brews they had maybe a dozen guest taps and 8 or so TH brews, just a great place to go to for awesome beer and food this place is very open and bright well done and beautiful will be back many times

After our initial stop of the evening at the Urban Growler Open House and dinner at the Foxy Falafel (excellent!), friends of ours who were at the newly opened Town Hall Lanes said the crowd had thinned a bit and that we should head over. When we walked in, I felt like Norm at Cheers—beer folk I knew at every turn, servers and customers.

The text from our insider friend that it's "not that bad if you just want beer" meant there was actually standing room when we arrived some time a bit before 9 pm. Two sets of friends who had been in line before the grand opening at 6 pm were seated and reported that the food was very good. Compared to Town Hall proper, the new place has the standards like Masala Mama and other TH greats, but a lot more guest taps. I started and finished with the White IPA, a superb brew that demonstrates the genius of Mike Hoops et al at the TH brew house. Peppery, spicy and light while still being assertive and full bodied, I settled in with a second pint while chatting away with friends.

TH Lanes is much larger than TH Tap, a place I have only been a few times because the effort to get there versus seven corners is about the same and I mostly drink new releases. Plus, my pint club discount works downtown. TH Lanes is a much closer and easier to get to from the beer wasteland where I live, so I see myself heading there more often. Also, we have more friends near TH Lanes, so the added incentive might give it the boost for me to show up for a pint. I didn't look at the menu, but the flatbread offering alone looked worth a second visit.

Owner Pete Rifakes seems to have pulled out all of the stops for the Lanes. I heard the high ceiling and room for a gorgeous chandelier (I know, weird, but it really works) came from knocking out a floor. The extensive remodeling is apparent when compared to a picture posted by MNBeer of the old Skylane Bowling. From a distance, the condition of the bowling lanes looked superb to this semi-informed bowler (watched the PBA every Saturday with my mom growing up).

And, the bathroom. If the reader has ever been in the Town Hall bathrooms, the only thing that has changed in my memory is the advertisement over the urinal. Better than Triple Rock, but nothing to write about. At the TH Lanes, it was like being in a disco tech. The unified wash area splits into gender specific locations and is posh and beautifully finished; it ranks up there with the ceramic tile of the Grey Lodge Pub or the barley art stall dividers of Left Hand Brewing.

Just before leaving, I was able to congratulate Pete and Mike on a jammed packed opening night and on the beauty of the bar. Both, along with staff moved over from the brewery, were working hard to keep the beer and food flowing. Town Hall Lanes is a fantastic bar space that has the benefit of great beer and presentation of Town Hall, plus the added bonus of a bowling party without being forced to drink macro swill. Stop by—it's worth the trip.

Town Hall Lanes in Minneapolis, MN
Place rating: 4.29 out of 5 with 17 ratings