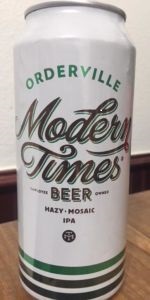 Notes: Orderville is a hazy IPA that blends the fruit-forward character of Mosaic & Denali hops with the resinous stickiness found in a mélange of dank varieties. The resulting beer is immensely rad, with an unmistakably bangin' aroma and a fully saturated hop flavor and finish. The juicy body provides a base-layer upon which the massive, incredibly unmistakably delicious hop character is built, inviting your taste buds to join a drum circle of flavor in a magical forest of hops.75 IBU
View: More Beers | Place Reviews
Recent ratings and reviews. | Log in to view more ratings + sorting options.
3.5 by mpenske from California on Apr 30, 2022
4 by zotzot from Vermont on Feb 28, 2022

Look: Hazy light orange with a frothy and silky-looking head that builds and holds as a pillow, slowly receding to reveal copious lacing clung to the glass
Aroma: Passionfruit, papaya, mango, pine, cantaloupe melon, blueberries, Cannabis, wafts of strawberries, and sweet bready malt notes
Taste: Blueberries and a tropical fruit salad team up and hit hard out of the gate, followed by subsequent waves of pine and weed that trade off landing blows. Sweet bready malt is present throughout and closes with more tropical fruit, pine, and a nice hop bite
Mouthfeel: Full, silky and soft throughout, medium-high carbonation, and a pretty soft finish with just a hint of a hop-influenced dry note
Overall: I dig it. This was one of the first beers I had from these folks when they first starting distributing in the state and it’s still tasty. A nice example of the tropical fruit aspects of Mosaic and for me, these folks and this beer are what I still call a tweener WCIPA/NEIPA – hazy, soft, lots of hop flavor, and smooth, but also not chalky, not too soft, a noticeable hop bite, and a light dry note

16 oz can pours a turbid medium gold, good head. It has a noticeable aroma of herbal hops and tropical fruit. It’s herbal, fruity, the oats smooth it out somewhat probably, and it packs a good hop punch that drinks stronger than the 55 listed on the label. Their interpretation of a hazy, and it’s a good one. I had it on tap twice at the Fish House in San Diego and it was a little smoother, the fruit was more prominent, but hid the bitterness well though it was there. This can also has some age on it and is falling off a little so glad I had it fresher on tap, cheers!

Not bad, but it's kind of an ordinary HIPA.

Pours a hazy yellow/orange with a thin head. Very little lacing.
Smell is awesome, sweet bready malt with citrusy aromas and resinous.
Taste is complex. The malt is there along with citrus and dankness. Also, some bitterness with maybe some pine and bitter citrus. The can says 7.2% ABV but it also tastes slightly boozy.
Lots of different hops combined nicely.
I like it.
Mouthfeel is good with normal carbonation.
Really nice Hazy IPA.

canned 5/20/21, consumed 7/19/21. Nice gold/orange color, but very thin head that is very short lived and basically no lacing, so very little to commend here for looks. The hop combo is apparent in the smell and to a lesser degree in the taste. I judged the body the be on the heavy side of medium for mouthfeel, with gentle carbonation. Overall an OK hazy but not nearly as good as others, including some from the same brewer. I tend to prefer hazy IPA that whack me in the face with an obvious hop and fruit flavor combined with a beautiful white fluffy head and conspicuous lacing and this one fails on those points.

Nose is dank, onion, fruity, citrus. Taste follows with perky carbonation, hints of lemon and muddled malty richness. Dry on the finish, lightly bitter, decent follow through. Touch of hop spice on the finish. Overall a solid and regular offering from MT.

A hazy gold color with a one inch white head and a bit of lace.
Aroma of citrus, some pine.
Taste of grapefruit, orange, caramel. Some late dankness.
More fruity than hoppy.
Nice beer.

Overall: Excited to see Modern Times in MN, picked up their mosaic focused IPA. Nice sweetness, NEIPA done well with no hop burn. Not too sweet, displays some breadiness and balance. Good stuff!

bought this IDK where
pouted from the 16 oz can into my Sam Smith pilsner glass:

S nice hops to the nose

T a bit of a bite on the toungue, but not classic IPA at all

M good not too heavy

Born date 8/18/20. The beer pours with a lot of head. Light carbonated bubble leaves little foam, some residual lacing. Look is yellow/golden with some opaque. Not as hazy as the can suggests, even with oats and white wheat for the malt. The heading here says 75IBU, can states 55IBU...which I probably side more with can. It is not as bitter as some reviews suggest which makes me think there may have been adjustments. Smell is citrus with a slight beautiful intoxicating dank. Taste and feel is medium bodied, would’ve preferred more chew, starts sweet and later is satisfying bitter addiction. Overall this one is an outstanding NEIPA, it could be that resin dank character that seems to be brought on by this blend of mosaic and Denali hops.

16 oz can, dated 8/10/20. Pours hazy gold yellow with a big rocky white head that retains well and laces the glass.

The aroma is sweet bready malt and fruity floral hops with light resin. A bit subdued.

The flavor is sweet bready malt with big bitter resiny fruity hops in the finish. The mouthfeel is medium bodied with low carbonation.

L: about 70-80% opaque yellow-yellowish gold as it pours out of the can; stacked in the glass it's almost 100% opaque, looks a lot like a pale orange juice; pushes up a massive thick head of white foam almost 2 inches tall that is super sticky and laces on the way down; fans of the style might want more "murk", but for this craft beer fan, it's an easy 5

S: grapefruit juice, cilantro, hint of green onion, some sweet bread malt, orange peel, grapefruit peel; as it warms, it starts smelling like a tart orange/grapefruit kolache, which typically isn't a thing, but that's what it smells like

T: juicy grapefruit, bitter grapefruit peel, some earthy dirt hop flavor and a layer of biscuit malt ... not nearly as sweet as the nose with a growing bitter buildup of earthy citrus peel

F: solid midweight, maybe on the lighter side of midweight but with some definite heft, relatively soft ... I'm not sure if it's the big pour I gave the beer or all the protein/hop haze in the glass, but the effect is close to a thick orange juice without the pulp

O: very solid beer that has a world-class opening — the first few sips are like drinking carbonated sweet grapefruit juice; the bitter buildup is a bit overkill, but nobody could accuse Modern Times of tricking up this recipe with lactose or fruit juice or anything other than water, yeast, hops and malt; for that, the brewery should be applauded for keeping an honest IPA in their regular lineup

Golden and hazy, this brew looks good. Grapefruit/piney character to the nose. Still going pretty well here. Citrus flavor with less sweetness than you would have in an NE IPA. Some malt in the finish and aftertaste with a mild bitterness holding. Good carbonation for the style with a thinner feel really. Maybe a West Coast version of a NE IPA but nothing like what I’m drinking here in PA. Not a bad beer though. Pretty decent as an IPA.