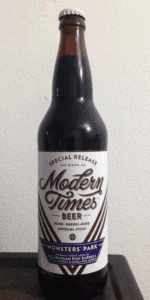 Pours oil black. Nose is rum and cacao. Taste is rum, cacao, rich molasses with a coconut finish. A top tier BA beer that just gets better as it warms up.

Magnificent. Pours thick and leaves streaks of liquid after each sip, but not as syrupy as some high-ABV, barrel-aged stouts. The cacao nibs shine at the front of the nose, with undertones of roasted malt, vanilla, and the rest of the base Monsters' Park beer. Toasted coconut practically shouts at you from your tongue; some people compare beers like this to Mounds bars, and it's a reasonable analogy to start with, but there's none of the cloying sweetness of a candy bar. The beer is very strongly flavored with chocolate and coconut, but it is still balanced.

I don't get a lot of the rum barrel in this one, however. What I do get is some heat and spice notes. I'm conflicted because, on the one hand, I want to sit on a bottle for a while to see if the booziness smooths out, but on the other hand, I don't want to risk the fantastic adjunct flavorings quieting down one bit. But most of all, I want to drink this three nights a week.

Such an amazing barrel aged stout. Monsters park is a great base and the coconut is so sweet and prominent in this beer, along with the strength and sweetness of the rum makes his a homerun.

Medium to heavy mouthfeel (which is the only realm in which this could be improved - to be chewier) , sweet coconut and rum nose, very similar notes to the BBA version, like an almond joy, lower carbonation which lends perfectly to the flavor and style. One of my top stouts ever

Well that could have been the best Rum barrel aged beer ever...

The taste follows nicely. Not as much coconut as the nose, but the balance is there. It's not overly sweet, overly boozy, overly coconutty. It's just really tasty.

Overall, on par with any of the best barrel aged stouts. Reminds me of barrel aged Vietnamese speedway.

Poured from a bomber into a snifter with a deep black look and a modest white head. Smell had hints of toasted coconut and rum barrel. Taste was led by the coconut, with a rich dark chocolate flavor to follow. Got a lot of vanilla from the barrel, and a decent amount of alcohol heat from the barrel as well. The coconut created a thick mouthfeel, which really coated the toungue. Overall this is a magnificent beer, but it might benefit from a little age to mellow out the rum barrel burn.