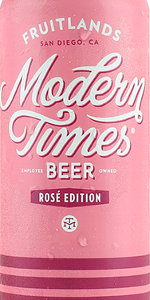 Pours a deep rose-gold. Half a finger of pink foam fades quickly to a lasting ring. Small bubbles of carbonation stream up from the bottom of the glass. Lacing is minimal. Good looking gose.

Mildly puckering, somewhat sweet, and very crisp. Spritzy, easy-drinking, and refreshing. I'm not much of a wine drinker, so I can't say how this compares to actual rosé, but I can say it's my new favorite Fruitlands variant. This will be great in the summer heat.

Pours a beautiful pink hue like Babe the Pig being born. Aroma is faint tartness like those couches chicks used to pass out on because their cage crinoline was too tight. Taste is pleasant like a New York summer before the influenza scare.

A bit ok. A bit perfectly ok for the moment.

A wonderful looking gose, orange with hues of pink shining through with a slightly tainted pink head that fades quickly

WOW! The aroma on this is fantastic. I'm picking up cherries and watermelon with wheat and wine notes in the background, without too much sour funk in the nose

When compared to the aroma, the taste is a bit of a letdown, but still good nonetheless. I get the same characters as the nose, but in a more mellowed out fashion and a stronger lacto sour presence and a hint of salinity

The hint of salinity I mentioned really helps move the feel of this brew along, it is fairly light bodied as expected and goes down quite easy

This is the first of a few brews I got from Craft Beer Kings online. As far as sites like that go, they are pretty solid. They were out of a few that I had ordered, so they personally texted me to see what I'd want as a replacement. Fantastic customer service, but I digress. This was a solid gose overall and I could see myself picking up more, especially in the warmer months

Pours pink with a reddish tint. Beautiful color. A fizzy head doesn't last. No real lacing. Bumped up the score a bit due to the color.

The smell is of various fruits - To me cherry and citrus (lemon) stand out.

The taste is of citrus and cherry. As it warms malt comes through. Cranberry tartness and touch of salt come through. Well balanced. Fruity and complex. Delicious!

A unique beer. Fruity without being too sweet or sour. Nice gose character with a fruity twist.

L: Pinkish amber
S Strong lemon with some raspberry smell.
T: A wacky fusion of berries and lemons that peak up in the center and fade. Simple beer with a light layer of rose on top.
F Light much like a fruit juice.
O: A rose mix on top of a good sour. Doesn't add much for taste though..

A clear dark pink with a dense white head that falls off to a thin ring with no lacing, this looks good. The nose has a blend of raw wheat, lemon, mild raspberry and a little salt. Faintly lactic with a watery yogurt note. The palate opens bright and with a restrained fruity flavor. The lemon and raspberry complement each other. Cherry and cranberry flavors are not particularly noticeable. The mid-palate is a little thin, disappointingly so. Delicate yogurty tartness is present on the mid-palate. Light saltiness on the finish, along with some dry, grainy wheat. Crisply carbonated, this is refreshing. OK.

This pours a light pinkish red color. First half of the pour had tremendous foam, second half not so much. Fruity sweet aroma, strawberries and cherries. Lightly tart, with a refreshingly sweet kiss of berry goodness.

Well it's got the Rose thing going for it. Very pretty. Thin cap and lacing.

Fruit punch. Cranberry, strawberry, cherry, etc. All the bright colored berries are there along with a light bready tang.

Taste is much less berry than you'd expect. Mostly strawberry I'd say. Tastes like a light amber with some fruity elements. A bit of caramel maybe. Not getting many sour notes.

ABV tastes very low, maybe around 4%. Watery mouthfeel. Carbonation could be higher to spruce things up - even if this was intended for the fairer sex.

All in all a very mild base beer with a dash of fruit mixed in. Not great but not offensive. Needs a lot more of something.

Grabbed this on a recent stop at La Mesa Wine & Spirits, one of four cans I picked up at the time. Had seen it around, but not solo. Had wanted to try it as I’ve enjoyed each of their Gose’s before (Passion Fruit & Guava a 3.94, Blood Orange & Hibiscus a 3.75, Sour Cherry a 3.69 and Apricot a 3.68) and this one mentioned that it would have cherries, raspberries, cranberries and lemons. Also with the heat wave going on in San Diego and no air conditioning, this seemed like the perfect beer for the situation.

Poured an amber clear color with one finger of off-white head. Lots of bubble streams coming up along the sides of the glass. Good spotty lacing. Decent retention. (Sight - 3.75)

Smelled initially like a sparkling Rosé (if that is a thing). Also raspberry tart, cranberry, cherry, red wine grape, lemon zest, fruit punch and salty sea. From the can was cranberry, cherry and salt. (Smell - 3.75)

Could’ve been the heat, but this was really good. Ended up second for me at 3.93 out of the five variants of Fruitlands that I’ve tried. (Overall - 4.00)

16 oz can from Brewers Haven. Pours out a pinkish hue, foamy pink head. Mild tart aroma, berries. The saltiness, which was also detected in the aroma, comes in late in the taste, and lingers on the palate, dry. Sweet fruity flavors mostly.