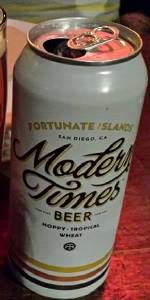 Notes: Fortunate Islands combines the bangin' hop aroma of an über-tropical IPA with the crisp,refreshing drinkability of a killer pale ale. We achieve this magical result by starting with a mild, nutty malt backbone, then dry-hopping the bejesus out of it with Citra and Amarillo hops. Restrained bitterness and vibrant notes of mango, tangerine, and passion fruit combine to form a sessionable crusher of mind-bending proportions. It tastes like wizards.
View: More Beers | Place Reviews
Recent ratings and reviews. | Log in to view more ratings + sorting options.
Rated: 4 by LAM01833 from Massachusetts

4.32/5  rDev +5.9%
look: 4 | smell: 4.5 | taste: 4.25 | feel: 4 | overall: 4.5
Well well well, am I picking up lighter beers recently or am I the one whose taste buds are going numb?
Okay, let’s get this straight: the way this beer smelled was really amazing so I got a bit too overwhelmed - and expected something outstanding, something boomingly hoppy out of this... which it wasn’t quite like.
Now, after I calm down, let me start over again. This is a Pale Wheat Ale!!! I mean... IS this a Pale Wheat Ale??? The beer smells amazing(ly hoppy), extremely fruity, no wonder it has been dry hopped just like an IPA, it says. Maybe that’s where I went wrong, expecting it to be (like) an IPA, which it is obviously not. A Pale Wheat Ale, is it a wheat ale? It is luckily not like a weizen, although it is made with wheat but without that remarkable yeast the Germans use for their beer.
I think you can tell by the looks that this is a wheat ale, it looked very wheaty, very pale and hazy but not like your IPA-hazy. The taste, on the other hand, was very crisp, had a mid- to low maltiness to the body which was quite light and on the top of it, maybe just as if the whole hops things went awol, you had the dry hopping: you have a wheat ale (without hops) dry hopped. Is this actually true? Not sure but it felt like that.
So it felt like a real refresher, with lots of orangy fruitiness to it but unlike your IPAs, it wasn’t punchy, here the taste quickly faded into lightness, almost like - like a lemonade without sugar? (if the latter was to be stood for an IPA...)
Anyway, even though it was different from what I expected, I was impressed with this beer, because I never had such a wheat beer, never had a Pale Wheat Ale before - just the Germans - and I do think that all wheat ales should be like this! I really liked the lightness of it and the way it was hopped, the way those hops created a real fruit flavor to the beer, making it almost like a Fruit and Field Beer.
A good one Modern Times, you never do wrong! Way to go!

Rated by adab123 from Ohio

The malts ensure that this is definitely a wheat beer; the wheat base makes its slightly spicy presence known, but the hops are (as with the aroma) very IPA-like. Tropical fruits, with the citrus elements are more subdued than in the aroma, but still the main show. Moderately bitter through the middle and into the aftertaste, with the bitterness lingering longer than the other elements of the flavor. Refreshing, crisp, and dry in the finish.

The body is thin to moderate, with the carbonation tingling the mouth.

Reviewed by TinFang from California

Wheat malt flavor is a nice distinguishing touch. I would buy this ale again.

Rated by omahawk from Nebraska

T: light malt, with hop flavors shining through. Lemon peel, orange, and tropical flavors. Perhaps a touch on the watery side.

M: light with moderate carbonation, and a semi creamy feel.

Reviewed by pubscout from New Jersey

3.8/5  rDev -6.9%
look: 4.25 | smell: 4.25 | taste: 3.5 | feel: 3.75 | overall: 3.75
Fortunate Islands Modern Times Pale Ale
Let's be clear: this is NOT an IPA, but it has SOME IPA characteristics...tropical citrus, tangerine and orange in the nose, but it doesn't translate as much to the palate. Translation: It smells better than it tastes. That's not to say it tastes bad, because it doesn't. It has a pretty color, too. There is a malt backbone, and it's acceptably balanced, but overall, the experience is underwhelming. It's neither a bad beer nor a great beer, and it certainly doesn't make me want to rush out and stock up. It's an OK Pale Ale, with a nice tropical/citrus hop nose and a medium mouthfeel.
Nobody will complain if you have a few dozen cans of these iced down for July 4th, but I doubt it will WOW anyone, except maybe those vegans who see the "This beer is vegan" (whatever THAT means) on the can. It's an OK beer. Nothing more, nothing less.