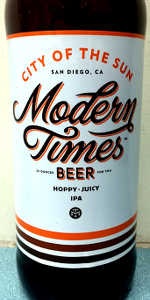 Given all of my success during New CANned Modern Twin Peak Evil Times Beer Sunday (Week 744), I have now switched to What Beer Are You Drinking Now (WBAYDN) #2,410! I have relocated to CAN Diego, CA! The CANQuest (tm) is getting a good workout.

From the CAN: "Hoppy * Juicy IPA"; "Employee Owned"; "This Beer Is Vegan"; "5 SRM/Gold 75 IBU 1.010 Final Gravity"; "
MOSAIC • MOTUEKA • DENALI [-] Hops TWO ROW • WHEAT • CARAVIENNE [-] Malts"; "City of the Sun is a ridiculously awesome IPA loaded with sticky, fruity new wave hops redolent of melon, lime, and citrus notes. The flavor is as complex as it is powerful, featuring a rounded bitterness and a powerfully tropical hop character, backed by a dry but supportive malt backbone. City of the Sun is named after a 17th Century work of crackpot utopian fiction that describes a sun-worshipping theocracy featuring the common ownership of children, goods, and partners, with a rigid system of (super hot) group mating."

I beCAN with a Crack! of the vent, followed by a slow, gentle C-Line Glug. It foamed up nicely, forming two-plus fingers of dense, foamy, rocky, tawny head with very good retention. Color was a hazy Amber (SRM = > 7, < 9). Nose was more like tropical fruit salad than an AIPA. Man, they stole the word "redolent" from me, but it definitely applied in this case! The Mosaic hops were front and center on the nose. Mouthfeel was medium. The taste was actually more in line with their verbiage and MUCH more tasty that I had girded myself for based on the nose. I definitely got melon & lime in juxtaposition to the tropical sweetness of the Mosaic hops. Thank goodness! The flavors actually meshed really nicely, although I could have used a bit more bitterness. Finish was semi-dry and I would have been more of a fan had it not been for the inherent lack of bitterness. YMMV.

L: Golden hue with a lacy head and a hazy translucence

S: Citrus, bread, and melon rind on the nose

T: Bitter hops all through. A little bit of tropicals, but mostly citrus, melons, and malt

O: Quite decent brew which feels like an easy drinker - but beware!

A middling IPA in most regards, this beer doesn't have enough juicy hop flavor. It does have an interesting almost brett-like yeasty character, but other than that, nothing to write home about.

Poured into a wine glass from a 16 oz. can. Pour is slightly hazed and sports a decent cap of foam, rich golden in color. Nose is of tropical hops, citrus, mango and a hint of garlic/shallot.

Taste follows with a light bitterness and some citrus fruit and remote onion notes. Fairly soft on the palate with a touch of hop spice, yet rather neutral overall.

Finish is so so and a bit boring. Garlic notes on the hop front are well balanced so as to be subtle vs in your face. Will seek a fresher version but not worth the premium.

can to pint glass.

A - Pours a lightly hazed burnt orange with a one finger white head. Good amount of soapy lacing.

Poured from the can into a Spiegelau IPA glass. Canned Jan 26th 2019.

Deep orange body, with a light copper hue. Slightly hazy, but mostly fairly clear in the body appearance. Big fistful producing head, that actually settles fairly quickly with island lacing and a real fine creamy like look. Off white, not quite yellow but not bleach in color either. Nice looking IPA.

Real nice juicy hop aroma mixing of fruit tropical notes and thick gum drop like candy flavors. Real impressive hop fruit mix of citrus and tropics that has a great gummy sensing flavor on the nose. Everything else is pretty neutral as far as malt and yeast, making for a one note experience but it is a stellar one out of the park at least.

Palate is a classic hop joy. Juicy rich mouthfeel, making an almost honey like feel and mouthflavor. The sweetness is just perfectly dialed in making this brew like a liquid hop rush. Thick amounts of gummy bitter hops, with a light touch of honey malt sweetness permeates the tongue just everywhere. Big amounts of tangerine and cantaloupe like melon just bursting everywhere.

Love me some Modern Times. Glad to see them still cranking out more great beers like this one.