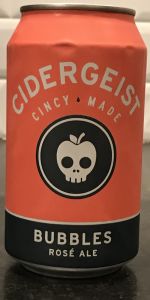 Notes: A Rosé Ale made with apple, peach and cranberry, for additional pink hue, tartness and juicy fruitiness.
View: Beers | Place Reviews
Reviews: 18 | Ratings: 78 | Log in to view all ratings and sort

Notes via stream of consciousness: OK, whadda we got here? Rosé Ale with apple, peach and cranberry; sounds good. It's somewhat hazy, and pink. The head is a short cap of greyish foam. It smells like a sparkling rosé, although there is a bit too much apple to it. I have no problems with that though. On to the taste... well there's definitely more apple there too, but it all works really well. It's slightly tart but also sweetish, and very fruity. I get both the peach and the cranberry as well. It's nicely balanced. In the mouth it's medium bodied and gently effervescent and just s touch sharp from the mild acidity. Overall it's quite refreshing, and very easy to drink. I could definitely go for more of this.
Review #6,986

Love bubbles. Great summertime hot day by the pool beer. Reminiscent of a sweet pink moscato or zinfandel. Apple and peach notes and very "sparkling" mouthfeel. A classic from rhinegeist.

Rose pink color with some bubbly like shall I dare say a pink moscato di asti.very fruity and tarty.Not a bad beer overall if you a wine enthusiast as well

Not even close to my "style" of beer, but left overs from a party cannot be wasted...if I liked wine coolers and wine spritzers I imagine I would absolutely love this....why? Because this brewer makes good stuff...not my thing, but good.

Apple champagne aroma, fruit punch appearance, drinks like a champagne bellini. Popular around here with folks who like those kinds of drinks.

A: Pinkish red in color with no head.

S: Light and fruity with a definite white wine aroma. It reminds me of communion...

T: Slightly tart with apple cider notes as well as a hint of cranberry, and definite sparkling white wine.

M: Light in body with fairly high carbonation, slight cling in the mouthfeel and a bit dry.

O: Overall not bad, but it feels more like the realm of wine cooler.... Fruity, tasty, but not my thing.

I was on a recent short road trip up to Boston to see the Red Sox play the KLE Indians at Fenway & while I was in town, I did some shopping, natch. I stayed at a hostel in Everett & went to the Total Wine & More in town where I found this one, among many others. I have to admit that I was a little surprised to find it on here, but it is listed as an "Ale", so fair dinkum. It makes a nice addition to The CANQuest (tm) in any event.

From the CAN: "Cidergeist Cincy Made"; "A bright, dry, and lithe Rosé Ale with apple, peach and cranberry, for tartness and blush. Bubble erupts with effervescence and evanescence."

I was very curious to Crack! this one open & I followed up with an inverted Glug. Well, chalk one up for truth in advertising - it effervesced with about two fingers of fizzy, bubbly, deep-pink head that was highly evanescent, quickly fizzing its way out of existence. Color was a pretty Pink-Amber (SRM = N/A), what they were referring to as "Rosé" and "Blush". How pretty, especially given its NE-quality clarity! Nose was redolent with apples and cranberries, much like Ocean Spray CranApple that I used to drink as a kid. Mouthfeel was kind of thin and watery. The taste was very tart and dry with the apple & cranberry combination easy to identify, although the peach seemed to be overwhelmed. It was quite fruity, which is what I expect in the style. That said, it was more like a Cider than an Ale. Finish was very dry, but also quite fruity and refreshing. It made for an intersting interlude, but one would probably satiate me. YMMV.

For a rose wine cider it is actually pretty tasty.
Left my mouth dry after two of them.
Won't be trying them again and the 4 in the fridge will probably be in there the rest of the fall until someone comes and needs a fall pick me up.

It is a cider, obviously, and a pretty solid one - maybe not quite as crisp as you would like, apple notes are pretty heavy, but it has a nice berry kick that is easy & refreshing

Totally NOT a beer. I mean, the can even says "Cidergeist." Nonetheless, this is a pretty tasty beverage. Ive tried several rose themed sours and they all seem to be slightly off in the sense that actual rose is pretty sweet. Since this is a cider, it avoids the tartness of a sour beer, or the saltiness of a gose and delivers a sweeter, more true to form fake rose cocktail in a can. I could kill about 8 of these while floating around in an inner tube in a pool.

Taste is fairly complex of tart peach, apple, nectarine and plum. While I don’t really get much cranberry at first, it comes out a tad with a slightly bitter, dry tanniny finish.

A soft, firm crisp carbonation runs through a medium body with a semi-dry finish. Really crushable--easily the best Rhinegeist I’ve had.

On tap @ Squirrel Cage Cafe, Squirrel Hill, Pittsburgh, Pa. Served in pint glass, little to no foam/head
lovely fruit punch hue, very fruity on first sip. Not much aroma noticeable due to smokers at the bar. At half glass the cider and tart after taste came through. Very refreshing on a 90 degree day. Would not make this my go to beverage, but enjoyable. Would be a perfect alternative for non beer drinkers at a picnic. And with a name like Bubbles, who wouldn't want to try it?

Can. No way this is beer. It tastes all cider. I guess they're muddying the water as to what this actually is. I call bullshit. It is pink, it is sweet, and it is cider. I wish I could give "N/A" as a rating. You get all 3's.

A: Pours a clear medium rosé in color with moderate amounts of fine active visible carbonation rising from the bottom of the glass and moderate pink + ruby red colored highlights. The beer has a finger tall fizzy pinkish white head that quickly reduces to a medium sized patch of very thin film and a very thin ring at the edges of the glass. Minimal amounts of lacing are observed.

M: Light to medium bodied with moderate amounts of carbonation. Crisp with a hint of dryness and acidic prickliness in the finish.

O: Formerly a cider, now marketed as a Rosé Ale... definitely still lots of apple + peach presence more reminiscent of a Boone's Farm kind of apple wine. Super easy to drink, enjoyable, and refreshing - perfect for the 70+ degree February day here in NC. I could easily have a couple of these - had been putting off drinking it because I did not think I was going to like it (wife brought it back for me from a trip).

This could be a gateway brew - a gateway to cider? Or maybe it really is just cider. That's what it feels like.

It pours a pale rose color (as advertised) with a tiny bit of fizz. The aroma is a dirty warning, more like bad wine than beer or cider. The taste is what I imagine cider drinks taste like (I may have tried some but I rarely would drink one, so what would I know). It's pretty big and sour, and has a depth that I doubt the ciders have. I would prefer it with more ale character.

Only recommended as a sour cider-like novelty.

S - All sorts of fruit, from expected grape, to cranberry and a touch of stone fruit, over a moderately sour hit.

T - The nose continues in the taste, but the flavor narrows a bit, into a tart cranberry note and red grapes. The middle offers something slightly vegetal, but the close swerves back to tartness. The fruit is strong with this one, and malts really take a back seat to that fruit.

M - Brisk, clean and with a lingering scrubbing acidity in the close.

O - Not sure this fits easily into any category. That said, it is tasty and a pleasant drinker.

i hate that i like this so much. rhinegeist is pretty garbage in general, and the idea of them making a sparkling rose cider (or whatever) with cranberry just makes my stomach turn. but this is delicious--a bit sweet and fruity up front, with a lovely carbonation, and a zippy, dry finish that leaves you very refreshed and wanting more. fuck this beer, but i really like it.

First dubbed as a rosé cider, the Cidergeist relinquish control of their apple cider and it has strolled onto the ale side of the brewhouse. Still, its generous use of peach, cranberry and apple lay its fingerprints all over this Rhinegeist summertime brew.

Bubbles pours the expected sparkling rosé wine color, steaming with ample carbonation and topping the glass with a stark white froth. Aromas of cider and wine intertwine on the nose with those additional orchard and berry fruits adding a rounded scent to the ale. Early flavors are of hard candy, light honey and simple fructose charm.

A consistent flavor travels across the middle palate with the taste of cranberry and peach making a slightly bigger mark on taste as the tastebuds acclimate to the playful acidity and the ale warms to reveal more secrets. Trending tart rather than hoppy, the ale finishes crisp, clean and decidedly macintosh apple-like.

A faint musty fruit flavor emits from the finish and carries the slight after palate of damp balsa. Clean but retaining a sweetness even late, the bubbles of the beer pop off of the tongue and lays a light carbonic bite on the finish, lightening the body and ushering in a sense of drinkability.


Bubbles Rosé Ale from Rhinegeist Brewery
Beer rating: 85 out of 100 with 78 ratings