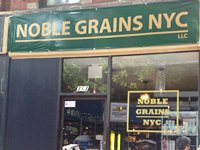 Reviewed by DovGibor from New York

4.36/5  rDev +5.3%
vibe: 4 | quality: 4.25 | service: 4.25 | selection: 4.75
Great selection for such a small space. They don't get everything, but very impressive for their size. They have 4 tap lines they do growler fills from. If they have it cold and you bring up a warm bottle they always offer to swap it for you. Overall prices are good, and they offer discounts on mixed six-packs and when bottles start to get old as well. If you live anywhere nearby I highly recommend them.
Sep 29, 2016
Rated: 4.14 by dbthom123 from Connecticut

4.03/5  rDev -2.7%
vibe: 3.5 | quality: 4.5 | service: 3.5 | selection: 4.25
Small bottle shop on the upper east side of Manhattan. Despite the small space, they manage to pack it with a decent selection of bottles, both singles and packs. All the brews I saw were top of the line. They also sell and do growler fills from the tap. Prices were decent; not at a discount but not highway robbery either. as a bonus, they give you a modest 5% discount for over six bottle purchases.
Sep 15, 2015
Rated: 4.73 by Nmelione from New Jersey

Better then decent selection of the typical good beer available in the NYC general area. Expect many of your favorites, but dont expect to find any very rare/hard to find offerings. Although the friendly and helpful worker in the store did say that they try to get what special realeses they can.

They also have an array of gourmet condiments, oils, crackers and the like.

the person working when I visited did say they will have growler filling available in the near future...IE within a few months...that will be a nice upgrade.

As of right now this store is worth a visit if you are local or happen to be in the neighborhood.

4.19/5  rDev +1.2%
vibe: 3.75 | quality: 4.25 | service: 4.25 | selection: 4.25
Nice new store on the far Upper East Side - not a craft beer desert, but certainly an arid zone. Their selection is fairly small due to licensing restrictions, but is very well curated: last time I was there, they had three different Crooked Stave beers, as well as the much-sought-after Mexican Cake. Other than that, they have a good stock of fancy snack foods. The proprietors are knowledgeable and friendly, and happy to order beers you're after but they don't have. The prices seem about on par with, say, Whole Foods - reasonable for New York City. It's a little out of the way for me, but well worth the long walk or the bus ride. Definitely a nice addition to the local craft beer scene.

Note: the owner, Bora, told me that they can't fill growlers because they need a working sink, and to get one installed would cost her $1,700. Maybe I'll become a partner in the business...

Edit 10/4/13: Looks like they have growlers now - so that's good. They update beermenus pretty often, so that's where to keep an eye on the selection. The prices for growlers seem high to me.