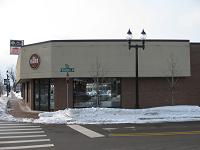 Nice place, stopped here on a brewery trip with a bachelor party. This place is plenty big enough to bring a group. Kitchen closed a little early I believe 10pm but no biggy. Tried the IPA which was good not out of this world. Nice dart boards and friendly staff. Close to home so I'll be hitting it again soon.

I think the brewing is coming along well. All of the beers I tasted were fully carbonated and quite delicious - much better than I was expecting. I tried all of the tier 1 and 2 options and my favorites were probably the red, the brown and the belgian brown. Overall I would say this brewery is comparable to Harmony brewing in Eastown in terms of quality; I will go back if I am in the area.

01/04/15 - Update
Revisited this brewpub yesterday, and I am updating the scores a bit. The beers are now overall better than the last visit (an IPA plus a rye IPA and a wheat IPA were a delicious trio), and the food menu has more items from what I recall the previous visit. Everyone in our group really enjoyed their selections. (The mac & cheese with pulled pork is to die for.)
******************************************************************
On a mini pub crawl I stopped here with my wife to try their beers and to have a Valentine's Day dinner. (This was all that what she wanted -- dinner during a pub crawl Great gal!) The pub is located in the downtown area of Grandville, and they share the street-corner building with an electrical contractor. The place is large for a new brewery. We arrived in mid-afternoon on a Friday and they were not yet busy. Parking is available on the west side of the building.

A long bar is situated along the wall to the right of the front door as you enter, and there are pub tables lining that area. A short partition wall separates the bar area from the numerous tables in the dining space. A glass-partitioned wall at the rear of the pub showcases the brewing equipment.

We ordered a sampler flight of 6 of the 12 beers that were available. The beers are separated on the menu into three tiers, and the sampler glasses are individually priced. Having read the first review of this brewery I was not expecting too much for the beer quality. However, the brewer appears to be getting the beers dialed in to the proper characteristics of their respective styles because we found fault with only one of the beers. (The Scotch Ale was too hoppy for my definition of that style, although it wasn't a bad tasting beer.) We graded the beers from a C- to a B so that the average was close to a C+ rating. All of them were good tasting, it's was just that none of them were anything really special except for the Double IPA which we rated at a B.

The food menu is pizza based, and the ingredients that make up the various pizza offerings are somewhat unique and tasty sounding, so it made for a difficult choice. I think the brewery offers a food special on some days that is something other than pizza, but there was nothing of this sort at the time of our visit. Our pizza was delicious, and we would order it again.

Based on the comments in the first review I can see that the brewer appears to be making headway to getting the beers into a better-than-average category, and I hope it happens. If we're in the area again we'd go back to this pub for a meal and beer, but I wouldn't make it a destination stop.


Osgood Brewing in Grandville, MI
Brewery rating: 3.5 out of 5 with 60 ratings