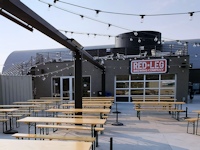 Notes: Red Leg Brewing Company is a Veteran owned production brewery in Colorado Springs, Colorado. Red Leg’s unique name is derived from the Civil War battlefields, where artillery soldiers wore a cardinal stripe on their pant leg to denote their location on the field of battle.

Red Leg provides the highest quality craft beer to honor the men and women who currently and formerly served in The United States Military. The craft beers that leave our facility will have the reputation that we strive for, continuing our service by providing those who serve with a craft beer they can be proud of.

Friday evening visit. Small taproom that was doing great business. Seemed to be very popular with the locals. Beers were all above average. Enjoyed the Coffee Porter. Service was excellent. Food truck outside (Mira Sol) was excellent! Would visit anytime I was in the area.

Love visiting breweries that are just a brewery with a food truck outside. The beer was average but the vibe is cool and friendly atmosphere.........

finally made it in here, just down the road from trinity, which i seem to end up at every time i am down in the springs. a warehouse space run by military veterans, there is a definite army theme going on. seems a lot more authentic there than say a place like comrade, which is an unintelligent appeal to a similar crowd i think. small taproom rather minimally outfitted, with the brewhouse in the back, which i was told has expanded already a few times since they have opened. they had something like seven beers on tap, all really pretty generic styles except for a lemon saison that was very good. i was impressed with the quality of the beers for how uninventive they seem to be, especially the brown ale, which is fantastic beer. the service was fine, nothing remarkable, but what i think is really cool is all the charity work they seem to be involved in. they apparently are having a run/walk for wounded veterans, donate some money to help returned vets, and other similarly important projects for those folks. i really admire that mission. the folks in the bar seemed to be loyal to this place, suggesting consistency and friendliness, i felt immediately welcome in here. overall perhaps not crafting nearly as complex beers as the place up the street, but the quality is there for the most part and their involvement in the community makes them winners in my book. ill be back for the brown...

This is a solid neighborhood brewery. It has a "post hipster" feel to me, with a crowd that seems slightly older and more mature than a typical college town brew pub would attract. The theme is military in a rather classy style. Slightly
Industrial. The few beers I have tasted we're good. Worth checking out for sure. I would return In a heartbeat, but it didn't blow my mind.

Stopped at this place a few weeks ago on a Friday evening, and it was packed, standing room only. Although it's a pretty small place, it was hoppin! The beers were good to great, the Doolittle IPA was excellent. Good beer, good people!

The brewery and tap room are definitely small-scale yet, when I went, they had six standard brews on tap plus two specialty brews. The beers are decently priced and flavorful. There is no kitchen or food service per se, yet local eateries and food trucks have a symbiotic relationship with the brewery and food is delivered to people at their tables. The atmosphere is your basic brewery/tap room feel yet what stands out are a very pleasant, very responsive serving staff. There was a strong community vibe in the tiny but packed tasting room when we went on an early Saturday evening including families with kids. There are also a smattering of board games available.

All in all, this place has great potential as a small yet intimate and community friendly brewery and tap room.