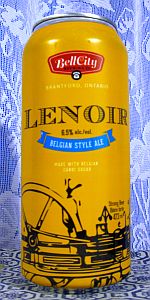 Notes: Beer in Belgium dates back to the first crusades when local abbeys brewed beer as a fund raising method. The artisanal brewing methods evolved over centuries and became popular with Master Brewers and beer drinkers around the world. Our premium ingredients and brewing methods are sure to impress the monks. Golden in colour, Lenoir has classic Belgian fruity aroma with a slight sweetness and very little bitterness. Lenoir is a smooth and sessionable Belgian style beer. Enjoy!

Can: Poured a hazy amber color ale with a large foamy head with god retention and some lacing. Aroma of lightly sweet Belgian style malt is OK. Taste is a mix of Belgian style malt with some cereal notes and some light caramel with hints of fruity ester and a touch of residual sugar notes. Body is full with good carbonation. Not bad but missing some attenuation.

On tap at the Rhino summer fest, labelled B for Belgian. Boozy and yeasty creation. Seemed more boozy than 6%. Drinkable and others liked it, perhaps a shortage of Belgian choices. Passable beer, new brewery doing something different. Above average mouthfeel.

Tallboy can from the LCBO; best before Feb 27 2015 and served slightly chilled.

Pours a clear orange-amber colour, with a relatively rough pour producing only a finger-or-so of loose, soapy, off-white-coloured head. It proceeds to dissipate at a steady rate over the next couple of minutes, eventually leaving behind a thin collar and very little else. Pretty restrained as far as aroma goes; light notes of grainy, biscuity malt, straw and brown sugar sweetness, with fruity hints of Belgian yeast, banana and apricot.

A decent Belgian ale; this one is pretty heavy on the fruit esters. Flavours of banana, pear and red apple come through quite clearly, over top of a backdrop consisting of grainy, doughy malt and candi sugar sweetness. The yeast surges forward in the back end, contributing some light spiciness that features alongside some low-key, grassy hop dryness and medicinal astringency. The aftertaste is yeasty, and tends to linger. Medium-bodied - perhaps barely leaning toward the lighter side, with moderate carbonation levels that offer a gentle bite on the palate. Not as crisp or lively as most examples of this style, but still somewhat refreshing. The brewery itself describes this beer as "sessionable", and although this is pretty easy to knock back, at 6.5% I would consider that to be a fairly tenuous assertion, at best.

Final Grade: 3.35, a B-. I was trying hard to find reasons to compliment this one, but ultimately I really feel that Bell City's Lenoir Belgian Style Ale is a thoroughly average example of this style. The banana-heavy flavour profile may serve to attract a few wheat beer fans, but Belgian pale ale fans will probably find the mouthfeel to be a bit lacking, and the overall flavour profile to be fairly one-dimensional. I don't dislike this beer - it's easy to drink and totally inoffensive - but IMO it still falls a bit short, even compared to the mass-produced stuff (think Affligem/Leffe Blonde). Probably a one-and-done for me; I preferred their cream ale.

Can from the lcbo for around $3. Decent but forgettable.

473 ml can served cold into a pint glass. Purchased for under $3 CDN from the LCBO.

Smell - some candidate sugar, general yeastiness and and nice combination of orchard fruits with Apple, pear and peach being the dominant players initially. Plenty of banana and some honey as well as the orchard fruits subside.

Taste - candidate sugar, banana and bubblegum, tastes very much like an overdone hefe. Some bitterness kicks in at the end making this a little more balanced, but the banana is overkill for a Belgian style pale ale.

Mouthfeel - body is a little limp and carbonation is very light. The elements that aren't limp, stick to the mouth a little too much.

Overall - too much banana and bubblegum for a Belgian style pale ale and the body just doesn't have the robust crispness that the best have to offer. Good to see a local brewery branching out into a difficult to execute style, but this one isn't for me.

a: a really deep and transparent yellow, going towards copper but not quite there. topped with off-white frothy head. not can-conditioned so it stays transparent all the way

s: really sweet, bready, honey-like malt and a bit of banana and apple

t: sweet malt all the way with a bit of those banana esters, and quick showings of clove. nice floral tastes as well. mild bitterness at the end

o: quite the unbalanced brew -- overly sweet and almost no yeast character to speak of. drinks like a sweet lager with a hint of belgian yeast thrown in. it doesn't taste horrible, but the sweetness will be too much for some people

This is my favourite beer from Bell City. Pours caramel colour with a short frothless head. The smell is sweet and slightly funky. The taste is classic Belgian, sweet and fruity and a bit tart. This is a fantastic introductory example to the Belgian beer style
April 10 2020

Lenoir Unfiltered April 11 2020
Not as good as the regular.

A- Opens well and pours a 1/2" high white head that films out within a minute or two. Very dark gold colour and filtered clear.

T- Sweet and yeasty. Very nice overall brew with great balance and flavor. The sugar does come through with little heat. Very similar to some Unibroue products as they must be using the same yeast. Very enjoyable.

M- Creamy at the beginning then drying out a touch at the end. No heat at all.

O- Very nice well rounded brew. Has the complexity you expect from a Belgium style brew and will buy again for sure. Can't sit around too long though as it will degrade in the can sooner than a bottle but that is typical of cans versus bottles.

This nice little brew went very well with...... Maple glazed ham with mustard rub and cloves. Served with sides you see fit however a butternut squash with maple syrup and brown sugar really does this one well too.

Boozy as s**t but thems the brakes with Belgian ales, especially the new world amped up to 11 approximations. Overall pretty solid but "sessionable"? Only in bizzaro world, where Duvell is also considered a session beer.