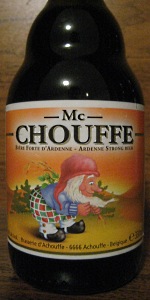 Notes: Among the mythical characters living in Fairyland, some are more unusual than others. Malcolm, for example, is different because of his accent and his kilt: when it comes to beer, his favourite is Mc CHOUFFE. The delicious flavours of aniseed, liquorice and toffee tickle his taste buds. If you listen to him, he will boast of its ruby sparkle, its smooth bitterness and its strong character, worthy of his native Scotland. Although robust, Mc CHOUFFE goes down as easily as LA CHOUFFE.

ABV varies from time to time.

11.2 oz bottle
A: Ruddy brown in the glass, fluffy tan head that fades into a nice lace, begs to be drank, drunk, drinked
S: Loads of fruity esters, caramel, wood and leaves
T: Sweet and malty with very little hop prescence, really nice smokey flavor up front, with lots of sweet fruit on the finish, alcohol is not easily detected
M: Super creamy, with very little carbonation, warms the belly
D: For a relatively big beer, this is supremely drinkable, would make for a lively and short session. Good Stuff.

Smell is fruity but thin.

Bit of bubblegum in the taste. Mildly sweet.

Mouth is carbonated and pleasant.

Nothing remarkable, but comfortable and easy to consume.

On draught at the brewery.
A: Dark murky brown with a large light beige head and medium lacing.
S: Caramel, very subtle.
T: Malts dominate, but there is some light spice in the background.
M: Lighter body than expected.
D: A good beer overall, but resembles a thin version of the N'Ice.

A decent strong dark ale. Good appearance, aroma, and palate. The flavor is fruity and slightly strong for my taste. Overall, pretty good.

A - Murky brown, with minimal bubbly head that left a bit on top

T - Medium malt, some brown/burnt sugar, leather, alot of dark fruit, but a little drier than others in the style. Booze is well hidden.

O - Not too bad at all. Would enjoy again. I wonder how the green bottle affects what's going on inside.

Pours with a rocky tan head. Some lacing. Dark Brown in color.

I get some of the caramel malts on tasting. I can actually taste a touch of hops , which is odd (I usually can't detect hops in most Belgians).

Mouthfeel is a little thinner and lighter than I'd like.

smell of some spice, and some malt.

taste is light, spice, malt, and brown sugar, end is a little spicy and dry.

overall a nice smooth beer with a hint of spice.

Smell 3.5: Very subdued bouquet on this beer. What I do smell is good: phenols, caramel, Belgian yeast. Just a shame there is not more of it in the nose.

Taste 4.25: Front is sweet on the front of the mouth, almost the tip of the tongue. This spreads over the entirety of the palate and is wonderfully warming. Middle is smooth and delicious, but with balanced tastes of noble hops and caramel malt. Finish is slightly spicy thanks to the yeast and also there is a pleasant smokiness along with a cloying taste of caramelized sugar. Aftertaste is somewhat sweet, but then takes a 180 degree turn and becomes dry, uplifting to the palate and utterly refreshing.

Mouthfeel 4.0: Carbonation is spot on for the style and the ABV and the bubble serve to break up the somewhat sweet taste.

Overall 4.0: Pleasant, but very complex and enjoyable. This is a beer that deceives you with its goofy little smurf-like character and its whimsical talk on the back of the bottle about the Chouffe and his Scottish friend, but make no mistake. This is a serious brew from artisans who are experts in the art of brewing. I would recommend this beer to any and all fans of Belgian beer, especially those who are fans of the Dark Side...er, style. ;)

Smelled of funky yeast and bread. Not really the La Chouffe aroma though... Taste was really good anyway. Had a dubbel-type flavor, not too strong, nice.

La chouffe is one of my favorites, so I was happy to find this on sale in small bottles. They need to make more of these small bottles available (the big bottles are green and I don't trust them).

Eye: In a La Chouffe Tulip: Cloudy reddish brown in color, nice creamy looking head, though retention could be better, starts out nice then fades to little more than a sickly looking blanket over the top of the beer. Lacing is nice looking-thin sheets along the sides of the glass.

Nose: Sweet candy type of aroma. Dark fruit and some chocolate aroma, small noble hop aroma, not really all that prevalent though, just barely there. Nothing all that special, smells good as expected.

Tongue: Spicy flavor and slightly alcoholic. Not as much dark fruit as was in the aroma. Dark malt flavors aren't as strong as I would've expected...slightly smokey and some chocolate, but both seem to be pretty low in flavor. Not as complex as I would've expected. Keep looking for more but its really not there.

Mouthfeel and Drinkability: Medium in body, seems a bit lighter than a Belgian Strong Dark should be, but that's just my opinion. Low and delicate carbonation, so low that when drinking this beer its not noticed until its thought about, until one is looking for it...I like that, subtle. Pretty much average all around. This is one I"d not be opposed to drinking again, but there are many others that are much better. Easy to drink, but again, pretty much average.

A - A dark redisch to brown hazy fluid with a fluffy off white head that stings to the glass.

S - Citrus and yeasty smell, smells like a double. There is not much sweetness in the smell.

T - Some sweet caramel and brown sugar, nicly in balance with the hops, vigs, dark fruit and other spices.

O - A good double, no doubt about it, nicely balanced.

From the 750ml bottle with no freshness date, decants into the pint glass a reddish brown, slightly hazy color with a bit of sediment in the pour, rather evenly distributed despite the bottle having sat upright for about two weeks in the beer fridge. Copious brown-tan head fades at a moderate pace leaving medium lace and a solid cap. Good looking beer here. Nose is a bit underwhelming, evincing minor malt and some dark fruit at best. Cold, warm, I was unable to coax anything else out; which is a disappointment. Taste is redeeming, however, with dark fruit and sweet malt up front, cherry/grape and a fairly moderate mild bitter finish. This is a pretty mellow beer. I had expected this to be classed as a dubbel, but it turns out a Belgian strong dark. Tomato, Tomahto, I suppose. Mouth is watery and semi-viscous, a bit thin to me. Drinkability is very good; its a mellow and pleasant, nay, cheerful beer.

From the bottle at De Kelk in Brugge during last week's trip to Belgium. Reviewed from notes.

Serve in a McChouffe chalice.

Nose brings loads of dark fruits and a bit of sweetness. Flavor falls along the same lines, though the two don't mix quite as well as in the nose. Medium body and good carbonation. Semi-dry finish. Well made and quite tasty.


McChouffe from Brasserie d'Achouffe
Beer rating: 89 out of 100 with 1205 ratings