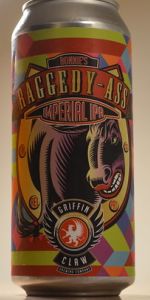 Poured from can to spiegelau IPA glass. Golden in color with a chill haze and two fingers of foam. Nice aromas of pine, grapefruit, papaya and biscuit. Flavors are an amazing balance of malt and hop, with tropical and citrus fruits riding a caramel biscuit backbone. Semi-slick and medium feel. Great compliment to Norm's.

dcbeers from District of Columbia

This brew was served on tap at the Griffin Claw Brewing Company taproom in Birmingham, Michigan. It arrived in a house goblet, glowing a deep pumpkin orange coloring. It held a half finger tall head of quick white foam, and although this phase was transient, a hearty film remained across the top of the liquid for the remainder of the tasting. Thick sheets of lacing were also left circumferentially around the glass. No haze or sediment was noted, and carbonation appeared to be medium. The nose filled with notes of warm vanilla cake, gritty pale maltiness, mustiness, penicillin chemical bite, candy corn and confectioner’s sugar, cucumber skins, pineapple juiciness, lightly caramel malts, and mango flesh fruitiness with warmth. Our first impression was that the flavoring was nicely hoppy, but also quite sweet, almost to the point of being cloying. As we sipped, the taste opened with big tinny metallics, almond buttery warmth, light diacetyls, bubblegum esters, bright herbal, grassy, and citric hops, cotton candy cloy, eucalyptus, and clean pale malts. The middle came to a peak with spicy brown sugar, booze, continued buttery slipperiness, toasty cereal and caramel grain, pale and pseudo-wheaty powdered dryness, light roast, and brown breadiness. The ending wash came with sesame and poppy seeds, walnut oils, dill, grapefruity and herbal hops, and sugary sweetness of pale and caramel malts, and liquid brown sugar. The aftertaste breathed of metallics, sourdough yeast, green grassy hops, fresh herbal tones, white sugar cubes, toasty pale malts, white flour, mango fruitiness, strawberry stems, and mineral bite. The body was medium to full, with a bit of a syrupy smack, while carbonation was medium. Slurp, smack, cream, froth, and glug were all nice, with a creamy coating left around the mouth, with mild astringency, and no real puck. The abv was appropriate, and the beer sipped easily.

Overall, what we enjoyed most about this beer was its flavor and its feel. While the base flavors were sweet, and more to the cloying malty side than to the resinous hop side, the balance was approachable. To compare, the nose was overly sweet throughout, with sugary sweetness and fruitiness pushing the hops too far to the side. Griffin Claw’s “single” IPA, Norm’s, found a much better balance, with a more pronounced presence of the hops in freshness and in function. Here, however, both of these components fade quickly with warmth, as it feels like they tried to just ramp up the other ingredients to make this a bigger, and better version, while inadvertently throwing things out of whack. That said, this is a nice, easy drinking DIPA for a hot summer’s day.

I really like this beer... I'll get that out right away. There's something unique about it. It has so much going on. On the front, there's a lot of malt -- even a bit of a rye quality. Halfway through there are some earthy, herbal, and, well, "dank" hops coupled with a honey-like flavor without a lot of sweetness thanks to the bitter hops cutting through. The finish is sort of leafy with hop resin. This isn't a particularly juicy DIPA -- it's one that's on the pinier/earthier side, but with a not-too-subtle malt profile. I don't love the aroma on this (there's a lot of malt on the nose), but the complexity comes through in the flavor, and that's what I ultimately enjoy ... and, ultimately all that matters in a beer, really.

Worth the price? Nope, but at the same time, I'd say it's worth a try despite it. Too bad about the price... this would be one of my go-to DIPAs.