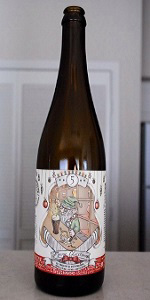 Provided by my sister-in-law – thanks Missy! Reviewed 2/27/20.
12 oz can Stamped on bottom “MERRY CHRISTMAS 11/23/19 15:52”. Stored at home at 42 degrees and served at 45 degrees in a hand washed and dried Jester King snifter.
Appearance – 3.
First pour – Auburn, hazy.
Body – Dark brown/black, opaque. When held to direct light, unchanged.
Head – Average (Maximum 3.5 cm, aggressive center pour), khaki, high density, average duration, diminishing to a four mm crown and a partial cap.
Lacing – None.
Aroma – 3 – Weak allspice and a bit of cola.
Flavor – 4 – Again, weak allspice. Much less obnoxious than many seasonal spiced beers. No alcohol (7.9% ABV according to BA, not marked on the label) flavor or aroma. No diacetyl, no dimethylsulfide.
Palate – 3 – Medium, watery, soft carbonation.
Final impression and summation: 3. One and done. I rated the taste as “4” because it is less overpowering than the majority of seasonal “spiced” beers. Otherwise this is a pretty average brew, something unusual for 5 Stones which consistently produces good to excellent IPAs and stouts.

Appearance: Medium amber brown in color, with a small off-white head, which soon fades to a scattering of foam. A thick dam of foam circles the glass wall, lacing is very fine-beaded, but unbroken.

Aroma: Cinnamon, nutmeg, allspice, and lesser vanilla dominate the aroma, I am reminded of spiced Christmas cookies. Dark malt and brown sugar are also present. There is only a faint whiff of alcohol in the aroma.

Taste: The taste begins with Christmas spices, the cinnamon being particularly notable, soon followed by dark malts and brown sugar. Warming alcohol appears a bit later in the taste. Pressing on, the spices meld with the dark malt, giving the effect of a Christmas cookie. Finishes with spices, dark malt, and a lingering, mild bitterness.

Drinkability/notes: As I have said of another 5 Stones beer: 'Very pleasant and drinkable, I wish it was more "over-the-top"'. Still, a nice example for Christmas Day of 2018.

MNishCT77 from District of Columbia

The beer is similar to many other seasonal ales in that its dark amber and smells strongly of nutmeg and cinnamon. It differs in taste and mouthfeel however. Vanilla & spice are more prevalent. Along with a creamier malt profile up front. It's also more carbonated than something like Karbachs Yule Shoot Your Eye Out.

"Ale handcrafted with cinnamon, vanilla beans, nutmeg, and allspice." The label art is fresh, fun, and amazing. 2013 vintage. Batch #1. 1 pint 9.4 fl oz brown glass bottle with unbranded gold colour pry-off pressure cap acquired at a local Austin, TX bottle shop for $10.99 USD and served into an Avery stem-tulip. Reviewed live. Expectations are above average; the vanilla beans sound tasty. But this is only my second beer from 5 Stones, so it could go either way. No ABV is listed on the label.

Served cold and allowed to warm over the course of consumption. Side-poured with standard vigor as no carbonation issues are anticipated.

Pours a two finger wide head of pale khaki colour. Decent creaminess and thickness. Consistency could be more even. Complexion could be smoother and better. It's a decent looking head, but there's ample room for improvement. Plenty of lacing sticks to the sides of the glass as the head recedes. Head retention is good - about 5-6 minutes.

Body colour is an opaque solid black. I'd almost call it a jet black; it's quite dark. No floating yeast particles or sediment is visible. Appears adequately carbonated.

Overall, it's looking generally appealing. There's no go-to appearance for a "spiced beer" (which I consider a weak almost catch-all category anyway), but there's nothing unique or special about this appearance. The head could be fuller and better and the body colour could be more interesting. It's not a vibrant or healthy looking beer, but there are no egregious overt flaws.

Sm: The spices really hit you; I even noticed them just while I was pouring. All four of the spices mentioned on the label appear in the aroma: cinnamon, nutmeg, allspice, and my personal favourite, vanilla bean. The vanilla seems authentic here; this isn't the artificial vanillicin additive you'd find in a mediocre imperial stout, for example. The cinnamon compliments the notes of raw residual sugars nicely; I'd guess brown sugar or even muscavado. Dark malts fill out the aroma nicely.

There's no obvious hop profile here, nor is there any real yeasty character. Luckily, no alcohol is detectable in the aroma.

It's a pleasant spice-dominant aroma of mild strength.

T: Dark malts and residual unrefined sugars (brown, muscavado, maybe even piloncillo) are the core of this beer, giving the spices a playground to fool around in. But sadly, the vanilla bean and cinnamon don't really come out to play and are instead timid and reticent. Nutmeg and allspice definitely come through. I also get a light kiss of raisin. Light touches of sassafras/sarsaparilla. The finish is lovely, with some spot-on cream that really closes out the build nicely.

It feels like the flavour potential of the spices was squandered here. The depth of flavour is surprisingly shallow. Average duration and intensity of flavour. The notes just don't come together like they should. It does have a loose cohesion, but it's far from a tight gestalt build. I'd really like to see the vanilla bean and cinnamon amped up. It's not as simple as many spiced beers, but it's also not horribly complex. Not real subtle or intricate either. I guess it has a fair balance, but this doesn't seem very carefully brewed.

No hop profile is notable. No yeast character comes through, but it definitely tastes like an ale and I suspect attenuation is fairly low. No alcohol comes through.

Mf: Smooth and wet. Near perfectly carbonated - I'll give it that. It's fairly filling but never has too heavy a weight on the palate; it's quite approachable for its ABV and dark malt content. Medium-bodied. It's got a nice presence on the palate; it's sleek and the texture complements the taste pretty well. The standout for me is the slight softness of the texture; this is not a biting mouthfeel and feels comforting on the tongue (if you'll forgive the pretension implicit in that phrasing).

Dr: Clearly they were going for a dark ale brewed with spices that would evoke Christmas. On that front they failed. The spicing doesn't work quite as well as it should, and the lack of vanilla bean presence is a big letdown. But it's nevertheless a very drinkable spiced ale with a mellow flavour profile. This beer will definitely find its fans, but I can't justify a 2nd purchase at this level of quality - not to mention at this price point. I do find myself getting tired of the flavour profile not even halfway into the bottle; I'd recommend a switch to a 12 fl oz format.

I wouldn't recommend it to friends and it's not worth seeking out, but given how relatively new 5 Stones is, I'm fairly impressed with how much they're trying. Sure, the execution fell short, but this is an inspired brew. And I'll take that over the overhopped IPAs and bland ambers coming out of most new breweries any day of the week.


Merry Christmas from 5 Stones Artisan Brewery
Beer rating: 85 out of 100 with 23 ratings