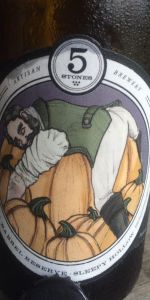 L: brilliantly clear copper/burnt orange ... lots of amber; pushes up abbey ale-like foam, very carbonated, soft pour renders almost 1-inch tall head of beige/tan foam; lots of activity in glass, hundreds of bubbles flying up column and creating a thick collar and most of a skin; no sticking or lacing, but the constant collar and skin are very cool

S: glazed donut, lots of malt up front; sweet pumpkin spice, alcohol ... hard to say if it's rum, but it's "hot", like sticking your nose in a shot glass of vodka; as it warms, it's truly coming off like a piece of pumpkin pie topped with super sweet whipped cream and sprinkled heavily with cinnamon ... uncanny!; brown sugar

T: light molasses, earthy pumpkin, sweeter pumpkin spice, ginger and alcohol ... again, hard to peg it as rum but it's a spirit flavor, like a pumpkiny vodka; almost dirt bitterness as the earthy flavor takes hold; alcohol flavor seems to avoid tasting medicinal; backend flavor has a lot of smoked pumpkin flavor, like eating a very brown pie crust on a sweet pumpkin pie; earthy pumpkin flavor is dominating up front, then some vodka-heat takes over with a pinch of molasses/brown sugar

F: feels like it looks -- like an abbey ale; relatively light and very crisp from a big load of carbonation, creating a full mouthfeel, much like a good dubbel; mouth does get a bit numb from the alcohol heat

O: fantastic barrel beer; the rum barrels are doing a lot here, even if the flavor never includes a clean shot of rum; the spices also seem to be helping this one out a bunch, giving it a pinch of sweetness and smoothing out the almost dirt-bitter pumpkin flavor; cool brew and one that could probably have used another 6-12 months in the fridge ... it's pretty hot; I'd love to try the base beer, and I'll also look for another bottle of this barrel-aged version; great brew