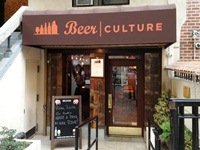 Reviewed by Kappakoosh from Texas

4.75/5  rDev +11.2%
My kind of place. you can go tap beer, which they had great selection. You can also pull from the fridge on your own and they pop the top for you (or you can buy and carry home). Huge fridge selection. I sat at the bar, patrons were very talkative and I made a couple of friends. Bartenders are engaged and smiled, which says they enjoy their job...that carry's to the patron as most of you know who have worked/work in the industry. All in all I like much better than Blind Tiger and Torst. Will go again if I am in the NY area.
Nov 19, 2014
More User Ratings:

4.35/5  rDev +1.9%
vibe: 4.5 | quality: 4.25 | service: 4.25 | selection: 4.5
Beer Culture (BC) is located on a quiet residential street, amid rows of iconic brownstones. Inside, is a small, dimly-lit room with a small bar area and several tables. The atmosphere is very laidback but somewhat hipster, yet quiet and reserved. In any case, there are no lager-swilling fratboys with backwards baseball caps here. While the draft selection is somewhat limited, what they do offer is plenty of local breweries, a few unknown to me. Excellent brews; I tasted several quality quaffs from my new local fave: Finback Brewing. In addition to the drafts, BC offers a wide array of bottles and cans. There is a small food menu, but no table service. BC is one of those places where time just flies by as you enjoy another brew.
Jan 16, 2018

4/5  rDev -6.3%
vibe: 4 | quality: 4 | service: 4 | selection: 4
Located in the Theatre District, at the ground/basement level and you could easily walk past this place without knowing there was a pretty good beer selection there. This is one of the combo bar and beer store. There are some tables upfront with a bar along one side and cooler along the other as well as in the back and a couple of shelves as well.

The beers are almost all stored chilled and while the selection is not enormous, there were a lot of good finds of local beers and the selection seems to change frequently. Because of the location, the beer is well protected from sunlight. Though they had draft beer available, I only picked up a couple of beers to go and did not have time to have one there - the beers I saw at other tables appeared to be well poured and in proper glassware.

The staff was friendly and offered to provide some guidance on selections if I was interested.

Rated by jcipa88 from Massachusetts

Reviewed by NizzleEGizzle from New York

Reviewed by DocHo11idaze from California

4.71/5  rDev +10.3%
vibe: 4.5 | quality: 4.5 | service: 5 | selection: 4.75
Over due review, was staying in manhattan back in May and was told to check this place out. Was a 10 minute walk from my hotel in time square, nice walk, awesome area. Anyhow, my gf, another couple and I popped in here when we had down time on a work vacation. Instantly greeted by the mAnager Jessie, gave us the run down on the place, good rotating tap list and bottles for on site consumption or to go. Prices to go were better than I expected tbh. A few rounds for us, the other couple left to do some touristy stuff, and we'd met them later. Well hours later they called, we were still having a blast at beer culture. Some guy at the bar bought some of us a damn expensive bourbon, come to find out he was the owner, Matt I believe. Cool dude, fun to talk to. Their chili nachos were bomb,had some sliders as well that were really delicious. Kept alternating between their tap list and bottles, I was in heaven as a good selection of beers not available in California. Also grandpas fridge was an awesome idea, can't recall everything in there but think budget beers like pbr, naga, etc. also had a vinyl record player spinning music which is a huge win in my book

Enjoyed myself so much, my gf and I came back the next night for round two, had some other beer bars I'd wanted to check out but really had so much fun here didn't see a need to go further. We we're welcomed by the manager and owner the second night and did it all over again. The same bartender was working as well, sorry can't remember his name but was knowledgable enough and super chill. Snagged a bunch of bottles to go at end of night to bring back to Cali, Jessie even hooked up a 120 minute from the back to buy. All in all was a cool spot, great selection, good people and good atmosphere. No pretentious pricks in sight, will be back if I ever visit NYC again. Also, a gentlemen's club is right next to it, which IMHO is a plus for post drink scenery .

Rated by antman27 from New York

Reviewed by Big_V from Maryland

Reviewed by MtnSoup from Colorado

Service was friendly, but not entirely knowledgeable on selections and styles. Not a huge gripe here, but some more knowledge with regard to the beers available is always welcome (especially when dropping a good amount of coin on bottles).

Definitely will be back next time I'm through NYC.

Reviewed by Chrisfarleywine from Iowa

4.7/5  rDev +10.1%
vibe: 5 | quality: 4.5 | service: 5 | selection: 4.5
For someone in Manhattan for work, it was a great place for great beer. The place was laid back and they had a great selection, both on tap and in the coolers. The bartenders were all great, one was even a Northwestern alum who turned me on to some great Chicago spots.
Jan 29, 2015
Rated: 4.15 by closisinthehouse from Florida

Reviewed by JGam115 from New York

The food menu is perfect for a bar of their size. Definitely try the Ol' Smokey. If you're looking for smaller plates, the Brewschetta is ideal...or maybe the meat & cheese plate. I can't forget the Angus beef sliders with your choice of cheese and bacon - actually, you can put bacon on just about any of the dishes.

The staff is friendly and very knowledgeable. Prices are in line with most bars around the area and overall, a better experience than most. I highly recommend!