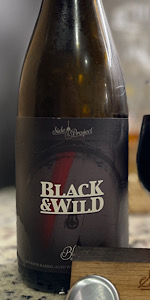 Notes: Black & Wild is the antithesis of most American Wild Ales. The robust nature of the intense acidity, bold sour cherries and chocolaty malt is layered with the deep notes of vanilla, spicy charred oak and rich caramels from the used bourbon barrels in which this beer matured for more than a year.
View: Beers | Place Reviews
Reviews: 28 | Ratings: 238 | Log in to view all ratings and sort
Reviews by spycow:

Reviewing Black & Wild, a dark sour aged in an bourbon barrel used to age Barrel Aged Abraxas from Side Project Brewing out of St. Louis, Missouri.

April 2014 vintage bottle served in a stemmed Side Project Brewing bulb glass and enjoyed on 05/28/14. HUGE thank you to Ryan for sharing this delectable treat.

Taste: Very tart whiskey soaked cherries with a light cinnamon twist on the midpalate and a delectable dark chocolate finish. Maple syrup backbone. No acidity, lovely sweet and sour with a nice sour bite upfront. More cinnamon and maple as it warms. Like the nose, the taste integration is sheer perfection. No booziness whatsoever. 5/5

Overall: For me, this is a top five overall American wild ale and the best dark sour that I have had the chance to sample. This beer is on par with Very Sour Blackberry, Cable Car Kriek, Blackberry Raspberry Lambic and Blueberry Flanders. The Abraxas-derived complexities interact perfectly with the dark sour/tart cherry characteristics. If you can get a bottle, I highly recommend seeking this one out.

Smells of tart cherries up front, fresh out of the fridge. It doesn't smell as sour as I was expecting it to be after one year in the bottle. Moderately acidic but not vinegary or lactic. After a few minutes, thick chocolate fudge comes out; literally like chocolate fondue. The cherries are still strong at this point, making for a nice chocolate covered cherry aroma. Oak, a bit of vanilla. The whiskey starts coming out more as it warms, as well. Smoky, sweet, robust whiskey; a nice complement, never quite emerging to the fore. Overall, to sum up the full extent of the aroma in one sentence- tart cherries covered in dark chocolate with a bit of vanilla essence and oak; mellow whiskey in the background. Fair amount of acidity, but not particularly lactic.

Flavour is equally complex. Initially, tart cherries, dark chocolate. So like in the nose, chocolate covered cherries. Not particularly sweet. Small amounts of vanilla are present, as is a moderate vinegary acidity. As it warms up, the oak and tannins seem to combine with the acidity to give a vinous flavour, like a Syrah; in my mind, it seems to impart a lot of red wine notes into the flavour; I suspect this is due to the combination of the oak tannins and the acidity. Whiskey is there, underneath all of this. No heat, but a subtle char is noticeable towards the end. A very complex beer that seems to evolve with minute changes in temperature, finally reaching its peak at room temperature. Even more cherries come out at the end. It's really a fascinating drinking experience.

The body is rich and substantial, which you'd think would be strange for an AWA, but it's substantial without being dry or creamy. Smooth with good carbonation. Different flavours follow each other in waves as they roll over your tongue, leaving a pleasantly tart, oaky and mildly sticky aftertaste without any kind of heat.

Overall, this is one of the more unique beers I've had the pleasure of drinking over the last 3 years. When I think about American Wild Ales and how they compare to their old world counterparts, I tend to find that most heralded examples of Wild Ales seem to be lacking in complexity by being so boldly acidic. Cory King has somehow taken the genre to another level by creating a beer that is bold in every way with plenty of acidity yet nuanced with a great array of different flavours that make each sip a new experience in of itself.

Pours a dark black body with a hint of brown depending on the lighting. One finger tan head that dissipates fairly quickly. Not altogether too different from the original batch. Smells of dark chocolate, cherries, oak, vinegar, fudge. The level of acidity you can smell and taste is remarkably similar to one-year old Batch 1 as above, which surprised me. Flavour is very similar; chocolate fudge and chocolate covered cherries, oak, vinegar. The cherries aren't as prominent as expected. The flavours pop nicely, with a nice tart 8/10 acidity that is quite sour but not bracingly so. No off flavours. As the beer warms, it brings out a little more of the chocolate and less of the cherries; it evolves quite a bit just like its predecessor did. Delicious. Mouthfeel is noticeably thinner than the original batch, I felt. There is still a fair amount of body, but perhaps I am comparing everything to Maman which I had the same day. Good carbonation, with a nice residual, slightly fizzy, chocolate fudge and acidity on the backend. Overall, it's not quite Batch 1 as far as body goes, but the flavour remains excellent and one of the more unique beers I've had.

A - Dark muddled brown and red coloring with minimal small tan head that recedes back into the glass. Nice retention here.

S - Cinnamon, Cherries, and whiskey dominate the nose followed by notes of funk and sourness.

M - Mouthfeel is spot on here with a medium bodied crisp mouthfeel and finish. Can't ask for much else here

O - I am just astounded at what Corey has put out.... this and Oude Fermier and truly masterpieces that deserve the hype. This is comparable to a VSB type quality beer and perfectly executed for the style that it resides in. If you can get this, seek this out with confidence

Re-review with a much larger pour.

This beer is one of the most complex interesting beers that has ever touched my lips.
Every sip you take exposes something different on the palate. One sip its a sour cherry bomb, another sip you get the whiskey notes, another sip you get the BA Abraxas chocolate and cinnamon mix, another sip all the flavors meld together. This has mellowed out since the release and is drinking incredible. This is the best sour I've ever had and may go on to be my favorite beer that I have consumed this year. One of the most complex and deep beers that has ever touched my lips. Sour, cherry, chocolate, whiskey, cinnamon, vanilla, everything you could want from beer.

8-10 ounces poured into a wine glass and consumed on-site at Perennial.
Can't wait to open more bottles of this.

Starting to turn a little more acidic but still very well balanced with the acidic cherries up front followed by that classic bourbon chocolate soaked tart cherries. Cinnamon and vanilla in between. The most complex beer out there.

Poured into a long stemmed Side Project tulip from a 750ml bottle.

Pours a nice black color with some mahogany edges and slight ruby hues. There is no head to be seen, as expected.

Wow. The aroma is intense cherry and vanilla notes. Completely acidic tartness can be perceived in the nose that almost singes the nostrils but in a good way. These notes are then tempered slightly by some mild sugary barrel sweetness that has some vanilla spice to it in the nose. As it warms there are TONS of sour cherry notes perceived in the nose. Tart, tart, tart with enough sweetness to slightly round out the sharp edges. Amazing notes of cherry and vanilla.

Flavor starts off with intense tartness. Pretty acidic. Definitely a delicious sipper. Flavor starts off with acidic tartness that then transforms into a nice fruit cherry tartness with some great notes of woody barrel on the background. There are some slight vanilla notes present that help give the brew a bit of a sweet edge but they only really compliments the intense tart cherry notes for this brew. The woody notes really compliments the beer as it warms and almost helps to add to the intensity. Mouthfeel is silky smooth and the near zero carbonation is perfect.

Another sour gem from Cory King. The layer complexities are very prevalent and vivid and the intense cherry notes shine on their own. Great American Wild.

Appearance: Pours the color of coffee capped by an inch or so of foam; some lacing action

Taste: Acetic sourness juts forward, with black cherry dominant; chocolate and caramel tones soften the acidity, with the Bourbon, vanilla and oak flavors building; incredible depth in both the sour and base malt flavors are highlighted in the finish

Batch 3. Into a a wine snifter

This is the biggest baddest dark sour out there. There is nothing subtle going on here. Big sour, big bourbon, big body, big cherry. Tobacco thrown into the mix too. A sipper.

Black and dark in color. So much jam. Jammy goodness. Sour and tart and goodness. Black berries and raspberries. Very drinkable. I'd love to have more of this one.

Glugs of used motor oil black aggressively suppress any build up of head outside of a very thin golden chain.

Viscously sticky yet contrastingly sour, strawberry-cherry balsamic vinegar pairs with a roasty yet chocolatey background. The barrel brings a smoothing, luscious Madagascar vanilla bean character, especially on the nose, and particularly over time as it warms, but the sharply tart cherry and balsamic vinegaryness can be painfully distracting at times.

With a little more deftness of hand favoring more nuanced subtly, this could have been a knockout stunner. All in all it's a bit too ostentatious for me.

Oops! This was full review #5000 for me. Another milestone blissfully ignored until after it passed.

750 mL bottle poured into a snifter. Black body with a huge khaki head. Nice looking. I immediately smell bourbon. Strong acidity and roasted malt. Maybe cherries? Taste is much stronger cherry. Intensely sour. Overpowers everything. Some roasted malt and a little bitterness, but mostly sourness. Well carbonated. Medium body. Flavorful, but overwhelmed by sourness. I get none of the barrel in the taste, though.