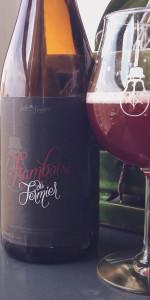 Notes: Framboise du Fermier is our Barrel-Fermented and Aged Saison du Fermier that at maturity, was racked to French Oak barrels with Raspberries and allowed to re-ferment for 6 months before being bottled.
View: Beers | Place Reviews
Reviews: 45 | Ratings: 298 | Log in to view all ratings and sort
Reviews by Adamostella:

750ml bottle. Served in a Side Project Sour glass.

Pours a beautiful dark reddish-pink body with a outright pink head, thick and fluffy, one and a half fingers, with almost perfect retention and lacing. If you give it some time, there are plenty of yeast rafts that show up as well.

Flavour is raspberries, a mild lemon bite, moderately acetic, not much lacto, mild graininess, a bit of hay. The star of the show here is raspberries and it's integrated perfectly with the base beer. The raspberry flavour is authentic and just extremely jammy. The sour quotient is moderate; not as much sourness as the 375ml bottles, which makes it even better in my book. A nearly flawless raspberry beer.

Mouthfeel is medium bodied, a bit thicker than the base Saison du Fermier. Good carbonation, fluffy and right to the point. Very easy to crush, but equally easy to savor. Full of raspberries on the finish.

Overall, probably the best beer I've had from Side Project. It's unreal how much raspberry is in this, and how perfectly it drinks. Three thumbs up; if you're reading this review, please do yourself the favor and get one for yourself.

750 mL bottle poured into a snifter. Deep pink/purple body. Hazy. Small white head. Raspberry and white wine. Almost all raspberry. Some yeast that reminds you its a saison. Sharp sourness. Sour raspberry. Some raspberry sweetness. A little bit musty. White wine finish. Medium light. A bit too sour for me. The raspberry flavor is good, but it dominates everything. Missing some of the quality of the base beer.

Cory brought out a bottle at he Fermier release. Wow. This is in my top 3 beers now for sure along with Westly and VSB. New favorite Side Project for sure. Need more.

Tasted (multiple times) at the Festival of Farmhouse Ales at Hill Farmstead on Saturday, August 8th, 2015.

So if any beer gets a perfect 5 across the board, it has to be this one. Even though I had a chance to try this a few times at the event, I'm going to review my last tasting, which happened to be the last tasting from the last bottle at the event, poured by Cory King himself.

Pours a very deep scarlet red that is completely opaque with raspberry. Looking into the beer further, I notice little chunks of raspberry sediment that definitely settled over the course of the event, with the last bottle obviously having the most. A pale pink head sat a couple of centimeters above this beautiful beer.

Flavor is very similar to the smell, juicy RASPBERRY. More fruit forward than sour. My former favorite raspberry beer was Atrial, but this is definitely more flavor packed and less sour than that, which is saying a lot. It has mild carbonation and is a little dry in the finish. I just can't get over how much fruit flavor is in this beer, I've never had anything like it before. Being lucky enough to have it side by side with Saison du Fermier a few times at the event, I would never be able to tell that it was the base beer without having been told so.

Mouthfeel is definitely thicker than Saison du Fermier, but not too thick at all. With the flavor profile being what it is, I'd say its perfect.

Overall I've had a decent amount of world class sours, but this is above all of the rest that I've tried and by a decent margin. The first few tastings I had I would definitely say were incredible but the last tasting has so much concentrated raspberries, it was a beer experience that I don't think I'll ever be able to parallel. If you ever get an opportunity to try this beer, do not pass it up.

B2 shared on 8-19-18(Fermier Day). Pours on the lighter shade of ruby(it was the lightest shade compared with Quetsche, Kriek, and Bluet). Nice raspberry funk on the nose. An initial raspberry flavor hits the palate, but for some strange reason quickly fades as my acidic "woo" reaction kicks in. I've read so many reviews here with the same "jam/jammy" comments, and I was very disappointed when I finally got to try this coveted brew, because those 2 words are far from the truth. Jam is sweet, something you put on bread(or crackers if you really want to be Mr. Fancy Pants). This beer is strongly acidic, dare I say overly so.

Wow. Absolutely fantastic beer. Deep ruby red/magenta in color with nice fluffy white head. The aroma is to die for. Loads of fresh, jammy raspberry, along with a nice underlying funk. Great balance of acidity, not being to dominated by lactic or acetic acid, and letting the fruit shine through. Overall, a fantastic experience, and one that ranks in the top 5 fruited wild ales I've had, in my opinion.

This beer poured out as a beautiful red color. The smell of the beer is loaded with raspberries and funk. The taste is also spewing lots of raspberry flavors, with a tart finish. The feel of the beer is light to medium bodied. Overall it's a very good beer.