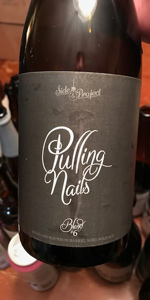 Pours maroon black with a lot of bubbly head, but it quickly dissipates leaving only a few bubbles around the edge of the glass. Smells of tart berries and oak. The taste is quite sour at first, but finish is fantastic. There are notes of red wine, blackberries, earthy funk and vanilla with a toasty caramel finish. The feel is pretty thin with a lot of carbonation -- wishing it had a bit more body.

This is my first PN blend, but it is quite good and would definitely acquire more as the opportunity presents itself.

this one was a little kitchen sinky for me, and where some of the other beers in this series succeeded in being sort of subtle in their new conjoined form, this one is quite the opposite. its insanely sour, more than almost any other beer i have had from these guys, and its all bourbon in the flavor. reading the list of blend threads here makes me wonder how they thought this would be a good idea, or why they might have chosen such divergent beers to blend together. i do get the blueberries from the derivation, jammy and sweet and intense, and i get some of the roast from the dark grain. there is an earthy tea-like element, maybe from the cascara, that i really like, a dried raisin and cherry flavor, the red wine is there, tannic and piquant, and sweet vanilla oaky bourbon, very mature, elements of this are three years old! but also kind of muddled on the whole, like we cant fully appreciate all the individual strands because the whole thing is so sour and barrel heavy. the sour quad aspect interests me, i get a little belgian yeast here before the acidity kills it, and that grain tenor is wonderful. this also tastes really boozy to me, even stronger than its stated 10% abv, and with the sourness and the fruity and whiskey sweetness, its over the top, too many strong sensations all at once. one of the least refined beers from these guys i think, which is not to say it isnt excellent, but it seems to have less of a cohesiveness. worth trying for its uniqueness and obvious rarity, but i liked the other pulling nails blends i have had better...

Pours extreme dark brown, almost black with fluffy tan head. Lots of carb, slight gush, but no beer lost, as we knew about the possibility. Head stuck around for 15-20 minutes. Lot of funk on the nose. Good berry flavor with a tang of tartness. The carbonation plays another roll, with the effervescence adding another dimension to the brew. A good outing from the blend master himself.

From bottle into chalice.

The bottle produced a ton of foam upon opening (gushing). Very dark appearance with minor amount of foam remaining in the glass throughout drinking. Smells is of berries and sour notes. Some barnyard funk but not nearly as much as Pulling Nails 4. Taste wise, there is a lot going on here. Blueberry tartness was the most obvious, maybe minor chocolate and coffee… just very complex. Good carbonation, and the finish is lighter than 10% abv would expect.

First time ever visiting or trying something from the legendary Side Project Bewery and this beer was crazy.
Pours jet black with no head, extremely smooth with subtle sourness and tons of fruit. Highly recommend getting on tap at the Cellar as of 6/9/18

Opaque coffee brown with hues of black and red swirled in, topped with a fuzzy beige head that settles to a thin film.

Taste is really tart, catching me off guard, but also exhibiting some char. I get cherry, grape skin, fresh plump raisin, and oak.

A super frothy body tones down the tartness, but a hint of vinegar acidity burns down the throat with a dry finish.

This one's really complex and deep, with tons of different attributes I'm not nearly doing justice to here.