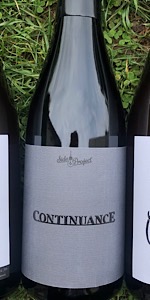 Notes: For Side Project, Continuance is a brother series to Derivation, a series of blended beers, all from our clean-barrel warehouse of imperial stouts, barleywines, adambiers and other non-sour, spirit barrel-aged beers.

Continuance is a series of beers allowing us to showcase our blending capabilities, but focusing exclusively on non-sour, spirit barrel-aged beers. We also wanted an outlet to experiment with using adjuncts in something other than stouts.

Continuance Blend #1 was blended over a 2-day blending session of pulling samples, enjoying bottles of For Gabe, and having fun blending “non-sour” beer in a way in which we had only enjoyed once before.

Our final blend consists of the recipes for:

The final ratio was:

As always, we blend to taste, blindly, so we are not influenced by anything other than our palates. These beers rested in their barrels of Willett 4 year bourbon, Willett 8 year bourbon, Buffalo Trace, BLiS maple bourbon and Rittenhouse Rye for 32 to 50 months.

#WickedBeerSideProjectShare2021. This is unbelievable. Much more stout-forward as I’d heard, and it works perfectly. Chocolate-covered raisins, warm bourbon, and a bit of maple sweetness on the finish. So well-rounded. Dark Horse for sure.

This reminds me of BCBCS in a most positive way and that's in that it surpasses the base beer and ventures into the elite variant category..

It's rich and delicious and creamy yet doesn't totally overwhelm you while you're drinking it....small sips yield big pleasure...

The booze is hidden better here than in BCS and it will grab hold and not let go if you aren't careful....

Not much head, not much smell. Excellent taste, great feel, overall amazing!

poured from a 750mL bottle into a snifter. pours a stout-y jet black with minimal dark tan head. nose is predominantly whiskey barrel with the afterthought of barleywine-like dark fruits, toffee and a hint of chocolate. taste is wonderful blend of thick, chocolate imperial stout and figgy, caramel barleywine all pulled together by a solid bourbon barrel finish. to my taste, the barleywine pops out more or distracts more from the stout but the mix of the 2 is quite incredible and decadent. it’s thicker mouthfeel makes it a pure joy to drink. big fan of this one.

Dark chocolate Raisinets and maple bruleed fig introduce this decadent blend. Darkly charred yet damp oak adds nougat and toasted marshmallow to the impressively long exhale. The barrel shines here with infinite complexity and without any unpleasant heat or overly woody characteristics that some of the individual components may have had in their own bottles.

Somewhat sticky on the lips, yet not too thick, a lingering heat remains after the finish, which is actually quite dry.

Continuance has rocketed to the top of my personal list of clean barrel aged Side Project or Shared beers. It's no wonder, though, considering that hit list consisted solely of barleywines, as I have found many of their stouts to be far sweeter than I typically prefer. The blending seems to have helped both the stouts and the barleywines smooth over each other's rough edges while also amplifying all of their best characteristics.